This post is part of our ongoing series, Canadian Wine — specifically, Canadian wineries and the remarkable wines they produce. Today, Meaghan Carey takes an in-depth look at one of Canada's major wine regions, British Columbia.

Thank you to Wines of British Columbia for providing the stunning photos for this article.

The momentum of BC as a growing wine region makes it one of the most exciting regions in North America. In terms of quality and production quantity, the wines of BC have come a long way in recent decades.

Not that long ago, the best known British Columbia wine was the iconic Canadian sparkling Baby Duck. First created in 1971 in Port Moody, Baby Duck was the bestselling Canadian wine in Canada through the 1970s, and sales remained strong through the 1980s. There was even a failed attempt to export it and sell Baby Duck in the UK.

If you want to reconnect with your youth or simply taste this piece of Canadian wine history, you can still purchase Baby Duck today, but — if not thankfully — there are now plenty of BC wines available on the Canadian market for all to enjoy.

What Are the Wine Regions in British Columbia?

BC has five official regions or Geographical Indications:

There is one official Sub-Geographical Indication: Golden Mile Bench (within the Okanagan Valley).

Outside of these official regions there are new wineries being established from the Kootenays and Shuswap to Northern British Columbia. As such the climate is varied throughout the province from hot and dry in the southern regions, to temperate  and rainy on the Islands.

The Okanagan Valley is the centre of production for BC wines; nearly half of all wineries in the province are located within this region. Here you find a stunningly picturesque wine region, with vineyards bordering shimmering lakes. What comes as a surprise to most visitors is the fact that the southern reaches of the Okanagan are classified as a desert with blisteringly hot summers, more than capable of ripening Bordeaux red varietals. But, as you would expect from Canada, the winters are cold enough that icewine is made almost every year. 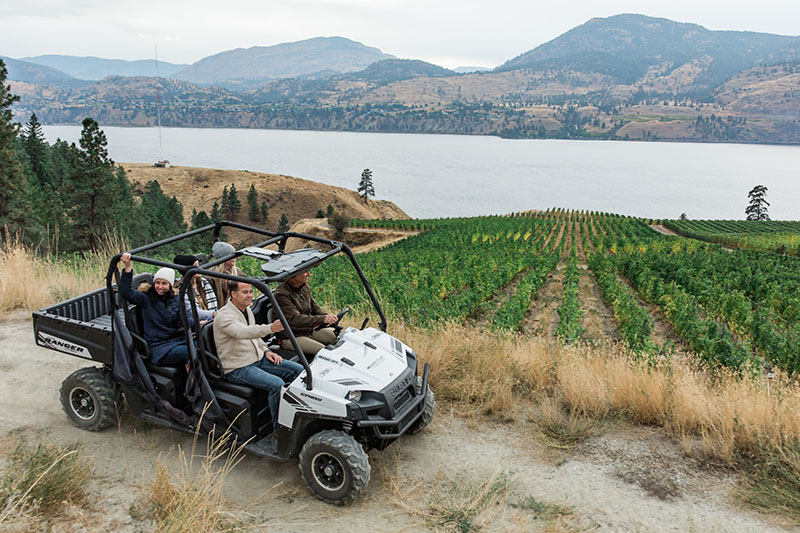 Most of wine in BC is crafted by small wineries, small producers who are families and farmers. These smaller BC wineries produce less than 5,000 cases (by comparison larger wineries can produce nearly million cases in one year); however, smaller scales of production bring the benefit of being able to establish a greater connection to the terroir and to the broader wine making community.

The grape growers and winemakers of the province display a deep respect for the land. Many farm sustainably, following organic and bio-dynamic practices, to ensure future harvests and land sustainability. They believe that place matters, and the distinctive geology and micro-climates of BC produce unique wines with a sense of place.

Behind every bottle of BC wine is a place and a face; the wines of British Columbia reflect the stories of the land where the grapes are grown and of the people who craft them.

What Does "BC VQA" Mean?

Established in 1990, BC VQA (Vintners Quality Alliance) is a program to ensure the appellation of origin of the wine and that specified quality standards are met by winemakers. The BC VQA program can trace its origins back to Ontario where some wine producers in that province came together and formed the Vintners Quality Alliance or “VQA” and implemented an industry-operated regulatory system.

What does it mean when you see BC VQA on a bottle? It indicates that this wine has been assessed by a qualified panel. It's a guarantee to the consumer that the wine is made from grapes 100 percent grown in BC and that 95 percent of the grapes must come from the specific region mentioned on the label. It also means that the wine has met the criteria for quality characteristics and is free of any specified faults.

What Wine Grapes Are Grown in BC?

BC isn't famous for any one particular style of wine, in either red or white. This lack of a signature wine is partly the result of such a diverse climate among five official wine regions. For example, in the Okanagan region alone there are great variances between the cooler wine growing regions around the city of Kelowna in the northern Okanagan and the significantly hotter southerly vineyards around Oliver.

In the more temperate regions through BC (for example Northern Okanagan and Vancouver Island), Pinot Noir, Riesling and Pinot Gris have shown exciting potential. In the warmer regions of the province (such as the Osoyoos region), Syrah and the Bordeaux reds have been highly favoured by winemakers. But it should be stressed there is no rule, and the young trailblazing vintners of BC continue to experiment with different varietals.

In terms of actual acres under vine, the top varietals of Merlot, Pinot Gris, Pinot Noir and Chardonnay represent nearly half of the total vines planted in British Columbia. The balance of white to red varietals has historically favoured white grapes; however, in the last decade, this has changed to favour reds over whites. 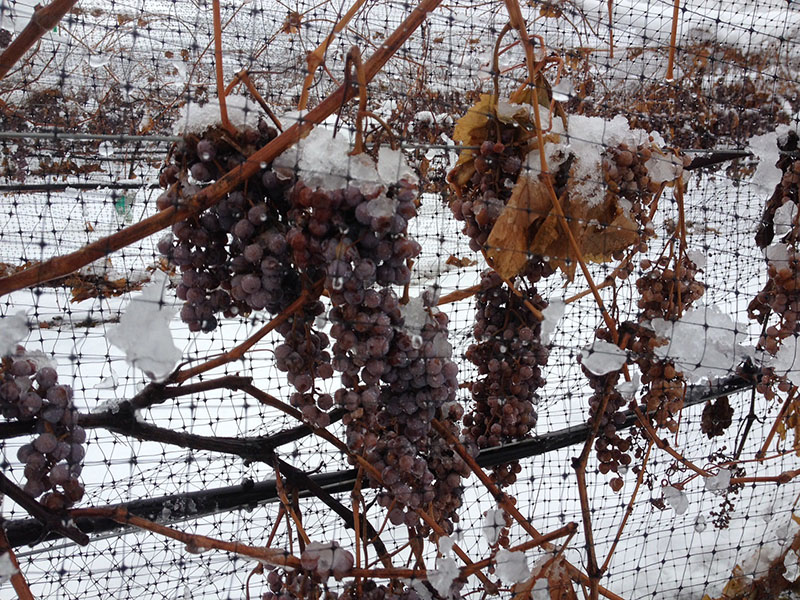 While its origins are believed to be German, Canada is known internationally for its icewine. Icewine was first produced in Canada in 1978 by Hainle Vineyards Estate Winery in Peachland, BC.

Icewine is produced by many BC wineries. The minimum temperature needed to produce icewine and for the grapes to naturally freeze on the vine is -8 degrees Celsius. Given BC’s more temperate climate, the only wine regions where the winters are cold enough to provide the necessary conditions are the Okanagan Valley and Similkameen Valley. Even in these regions, there may be years that aren't cold enough to produce icewine or it is produced, but in lesser quantities.

In 2015, 16 wineries in British Columbia produced icewine; however, as many as 25 wineries may have left grapes on the vine in anticipation of harvesting once frozen. 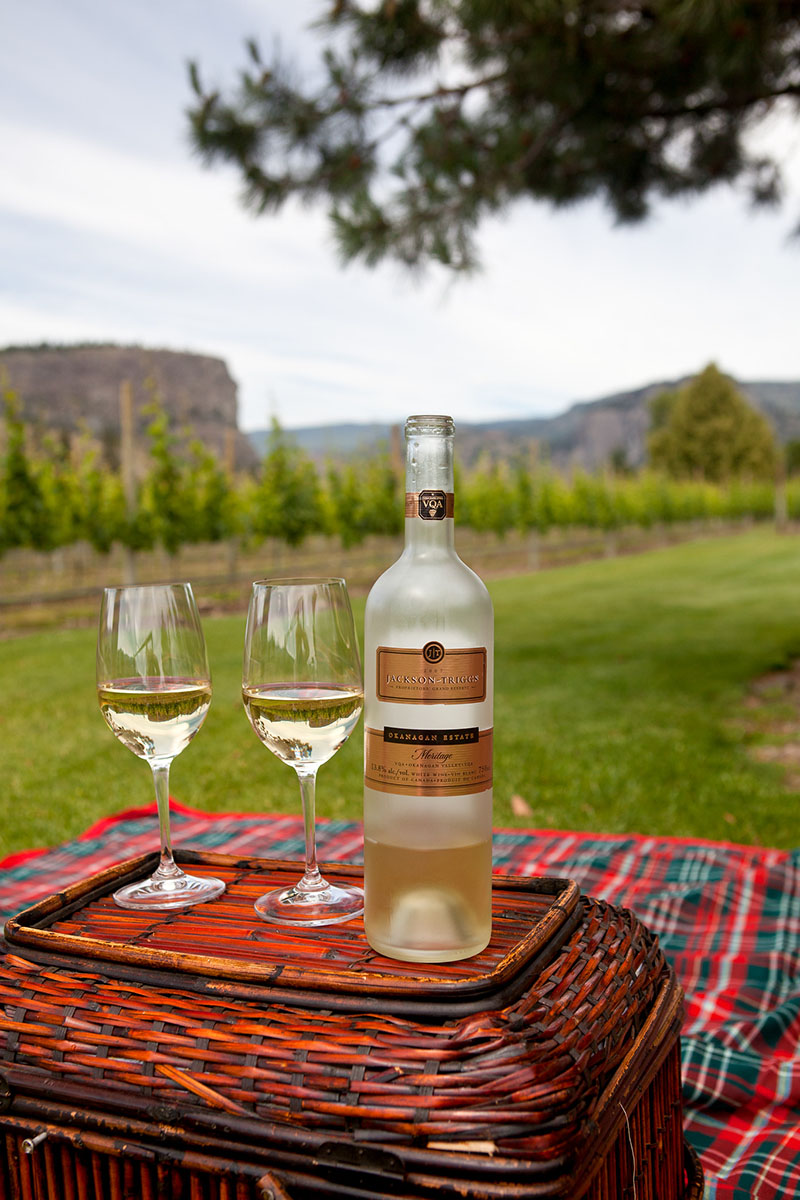 Each year over one million visitors bask in the hospitality of British Columbia wineries and the beautiful landscapes of the province's vineyards. With unique experiences, charming hosts and oh so delicious wine, it's easy to understand why people from around the world flock to this growing wine region.

There's a certain romanticism that goes along with visiting a wine region … visions of strolling through the vines, picnic lunches amongst the grapes and watching the sun set over the vineyard hills. This romantic vision isn’t lost on BC wineries.

In Osoyoos, visitors will find La Stella and their Tuscan-style villa and winery perched on the edge of Osoyoos Lake in the centre of the South Okanagan. Make this your wine country retreat in the winery’s "The Lakehouse," an Italian-inspired villa where you'll wake up to expansive views of the lake.

On Vancouver Island you can relax at Blue Grouse’s "Bed & Bottle" retreat. The Grouse House is situated on the edge of the vineyard and a short distance from Cowichan Bay. It's the perfect getaway to enjoy the natural beauty of British Columbia and the vineyards.

Not to be missed are the acclaimed restaurants throughout BC wine country, which source seasonal, local ingredients to create exciting and unexpected pairings. Open from March through December, Miradoro Restaurant at Tinhorn Creek is a food lover's delight that's not only acclaimed in BC, but has been recognized as one of the best winery restaurants in the world.

Whether you want to explore British Columbia wine country by bicycle, a bus or vintage car, or even by paddle board, there are various tours and options that will suit every style of traveller.

Engage with BC Wines on Social Media