brought to you by Janes Family Foods.

The news is full this week.  Really full.  So if you don't have a cup of coffee or tea, you might want to go get one! Let's kick it off with some winners...

Monthly Winners With Janes and Arla

The first news of October means… time for September winners!

First up we have free product vouchers from our Weekly News Sponsor,  Janes Family Foods, for one randomly drawn member.  Random.org brought up member0882 which is...Clockwatching Tart! Congrats Jennifer.  Melissa will be in touch for your mailing details.

Next up we have $25 in gift certificates from our Featured Member Blog sponsor, Arla foods.  This goes out to one of August’s Featured Member Blogs and we had five Featured blogs last month. Random.org chose…#2 –Life Where We Are.  Congrats Misty – Melissa will be in touch shortly for your mailing info!

We’ll have more October winners the first week of November!

Mushrooms Canada is gearing up for our first ever #MushroomsGoPINK Pin Party on October 8th, 2013 at 9PM ET.

RSVP for your place at the party and for your chance to win!

Big congrats to FBC member Dan Clapson along with Diana Ng and Dave Wilkinson for launching Canada's newest online culinary destination, Eat North.  Determined to bring out the edible best  of what Canada has to offer, the site will feature recipes, highlight dining destinations, up and coming chefs, farmers' markets and suppliers from coast to coast.  They'll keep it light with food friendly lists with a touch of sarcasm thrown in.

We're excited to see other FBC members like Halifax's Kathy Jollimore and Calgary's Stephanie Eddy and Vincci Tsui contributing to the site, as well as feature's on Ottawa's Kelly Brisson and her new project.  Great to see some of the outstanding smaller food centres in Canada being represented!

Join us tomorrow evening (Tuesday, Oct 8th, 6pmPT/9pmET) for twitter party with Tenderflake that's all about #BakeWithStyle.  We'll be talking about pie, recipes, baking and of course, there will be prizes.  But ya gotta RSVP to take part and be eligible for the goodies.  We've made it easy - you can RSVP right here! 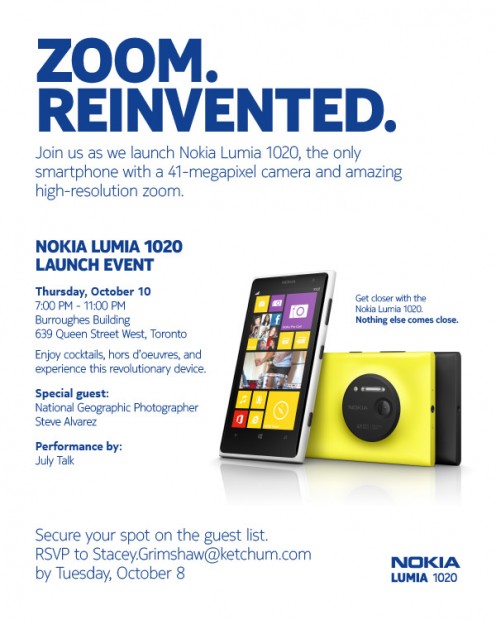 Join Nokia as they launch Nokia Lumia 1020, the only smartphone with a 41-megapixel camera and amazing high-resolution zoom.

Lindsay and Dana of Feast: An Edible Road Trip are now on the East Coast. Say hi to them at La Frasca in Halifax on October 17th. Chat about food, social media, where they've been, and where they're heading next! We're happy to team up with Hootsuite for this tweetup, so follow along at #HootUpFeast & #FBCFeast.

FBC Member Carolyne Kauser-Abbott of Ginger and Nutmeg has just launched her second travel app, this time on Banff, AB.  It's a 15 stop historical walk and a "taste" of Banff's best restaurants.  Both iPhone and Android compatible the app lets you tour Banff's unique heritage while sampling contemporary, seasonal cuisine along the way.  You can find the app on the Edible Heritage website or in the App Store or Google Play.  Nice work Carolyne!

Celebrate Canada's best food writing on November 4th, 2013. The event will kick-off with a welcoming reception, be followed by the awards presentation and topped off with a gala reception with 10 amazing chefs hosting it, and a wine and beer open bar. It's a tremendous networking opportunities and a chance to meet all the book authors and industry leaders

For more details, check out the link!

A big welcome to all our new members this week.  It's great to meet you all!

And remember, if you have anything you’d like to share with your fellow members in the news, please let us know about it.  To have your submission appear in a Monday news post, the deadline is Friday at 5pm Pacific time.  You can send your submissions directly to Melissa.

We’re so excited for this Pin Party! Hope to have lots of FBC members out for the night.

Congratulations Jennifer on your win!