Where were you born?

John was born in Oshawa, Ontario.

Jen was born in Ottawa, Ontario.

Where are you living now?

We both live in Toronto, Ontario.

JOHN: I wanted to get into food writing, having been inspired by being around so many talented authors from my time spent in book publishing and working at The Cookbook Store. I knew I could do it but had never put a focused effort into it. Then, as we began to brainstorm what we thought the structure of Crustcrumbs should be, I started getting a bit of food styling experience on a couple TV shows, which shifted my attention because I was getting all this wild inspiration from an entirely new beast that I wanted to put into practice. I think for both of us, we thought it’d be a way to challenge ourselves and try new techniques that interested us.

JEN: John said he wanted to do a Ghostbusters food photoshoot and I was sold immediately. I've always wanted to do food photography, but I hate styling food. John likes styling food, but doesn't know the photography side. When he approached me with the idea of staging themed photoshoots, it sounded like a lot of fun. Plus, John is a great cook and I get to taste test!

JOHN: We figured that whatever name we chose for the blog, we would get tired of and possibly regret, so we tried to go with something food related and nonsensical that we weren’t overly attached to. I also wanted it to be one-word because I felt so many blogs out there end up going with two foods, joined by an ampersand like “Lasagne & Butterscotch”. We came to searching for food references in literature and saw “crustcrumbs" referenced in Ulysses by James Joyce. Other than the hundred other food blogs out their that reference “crumbs” in their name, we liked it. I think it works really well now, being tied to that quote, because we gravitate to using people in our posts, where the food kind of acts as a symbol that defines their character, like a snow bunny sipping hot chocolate while sitting on the edge of an ice rink, or a couple of hilariously misguided independent women from the 70s sharing their tips for entertaining.

JEN: We made a lot of decisions about the site before discussing a name, because we knew that would be the hardest part. One night, I literally had a dream that our blog was named "Crumbs." I told John, and he said, "that's stupid. Everybody uses 'crumb' in their name." After several hours in a coffee shop brainstorming, we came across the James Joyce quote, found that crustcrumbs.com was available, as was the username crustcrumbs on every social media site, so that settled it.

JOHN: We try to tell stories through food, photography, and writing, where the food is consumed in an idealized setting, such as waffles in a diner or braised beef and glazed carrots for a Sunday night dinner at Grandma’s

JEN: I try to avoid writing as much as possible, but sometimes I do behind-the-scenes posts with images from our photoshoots.

What post are you most proud of and why? 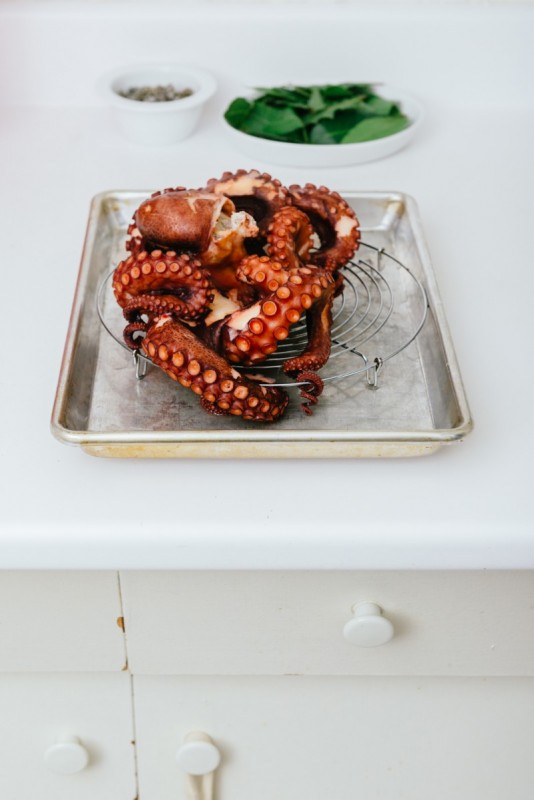 JOHN: An Octopus for the Rest of Us

I really like how we both got our voices heard, first with Jen’s post with a “Field Trip to the Aquarium” and then my post about cooking an octopus. I thought it was a funny idea and it seemed to actually come together. Apart from the aquarium, it was the first time we had shot anything in my apartment. We discussed ahead of time what style we wanted to mimic for the food and Jen really nailed it and I was shocked to see how much light she was able to grab out of my tiny galley kitchen. Jen has taken some amazing shots for our posts but I think one of my favourites so far is seeing that poached, red-tinged octopus draining on a cooling rack on my counter.

It's probably the most effort we've put in, photoshoot-wise (John has spent a ton more time on food prep for other posts). We traveled 1.5 hours north, got up first thing in the morning, trekked out into the middle of the lake in a heavy snowstorm with my camera gear, food, and a portable grill, and convinced a random guy on a snowmobile to drill us a hole in the ice. It was a fun mini-adventure and I love shooting in unpredictable circumstances.

I don’t think we’ve had a post that’s fallen completely flat. If something isn’t doing well, I feel it’s mostly because we missed our mark on publishing it and just missed the audience. Our posts can change tone and style drastically, meaning we’re always finding new audiences depending on what we’re doing. When we did 70s Week with the comedy duo, Terrific Women it was really well received but it didn’t or hasn’t yet blown up the way I’d like it to—I think it has enormous potential and truthfully it’s doing better directly on YouTube than it is on our page. I think anyone who comes to us for delicious looking food and photos was probably a bit confused that the food all of a sudden looked terrible and showcased a couple of crazy ladies doing weird things with pineapples and pepperoni sticks. It was one of our first big collaborations where we had a videographer and producer working with us that Sara Hennessey and Steph Kaliner work with when they do their own videos. It was such a talented team of people to work with and I’m so pleased with what we got out of it that I hope we can do another series with them in the future.

Where are my fellow children of the 80s, excited about making edible Ghostbusters ectoplasm?

This post came out of a series of dessert posts when we first started. For Halloween, we made up a Ghostbusters-themed dessert cart and though we both love the hero image of the cart drench in lime slime, the posts that followed were just close ups from the same angle as the original. I hadn’t come up with a voice for myself yet on the blog either so there’s really not much happening—it’s just a cheesecake dripping in slime and a recipe. I think it’s possibly because it’s gluten free but we get so many hits for that page, mostly from search engine results from people looking for a gluten free cheesecake recipe. They must be so let down when they actually get to the page and find out how hideous it looks.

JEN: Yeah, it actually bugs me that the cheesecake is our most popular post. I don't like that the first impression hundreds of people have of us and Crustcrumbs is that gross cheesecake photo. We've made other gluten free recipes, but they don't receive as many hits as that one.

What is one (non-kitchen) gadget you can’t live without?

JOHN: Jen and I both use the Google Maps app our iPhones the most for its GPS function. I find it incredibly useful when I’m shopping for shoots because I often have to get to different parts of the city to find very specific items. I can type in Bernard’s while I’m at the market and it will figure out what I mean and tell me the fastest way to get there so I can pick up the lechon before circling around to a strip of florists in midtown before rush hour kicks in.

JEN: My Amazon Prime subscription. Does that count as a gadget? I like that I can go, "oh crap, I need this thing for a photoshoot," pop onto Amazon, and it magically shows up at my house the next day. If that doesn't count, then my Nikon 105mm lens. It's my favourite.

What is one kitchen gadget you can’t live without?

JEN: Can I be boring and say my electric kettle? I drink a lot of tea. A LOT. I also like my silicone spoonulas.

JOHN: I can never think of a specific dish whenever anyone asks me this question but I do have a favourite ingredient I’m into at the moment, which is Moscatel vinegar. The Le Pigeon cookbook has a creamy aged gouda dressing that uses it heavily and along with the cheese, it really makes that dressing addictive.

JEN: Avocados. Recipe: cut in half, eat with spoon.

JOHN: We’ve started to get more excited about possible collaborations with other people. Now that we’ve explored a bit of what we’re capable of doing and found out that there’s people excited to see it, we want to get others involved. Our favourite posts have involved bringing other people’s talents forward. We’re open to anything—with the theme we’ve established for the blog we feel there are a million fun and different ways to play with our food.

JOHN: When we were first brainstorming what Crustcrumbs should be, Jen said I was really consistent in knowing what I didn’t like. We’ve been friends for ten years now and understand that when we’re not seeing eye-to-eye, which happens often, instead of giving up, we try to meet in the middle because we can trust in each other’s judgement. I think that we both feel strongly about what we’re responsible for on the blog, meaning that you’re really seeing our style and personalities coming through in each shoot.

JEN: I've tried to do the "here's what I ate today" kind of food blog in the past, and I can't do it. I like reading a lot of those blogs, but I find it really boring to write one. I think Crustcrumbs is unique because we do fairly elaborate photoshoots, almost all of which are done in a completely different style. Sometimes we shoot by ourselves in my studio, sometimes we find a location and hire models. Sometimes we make things that are delicious, and sometimes we make things that are comical. I think it's unique that not all our food is styled to look delicious - Lime Slime was supposed to look like a dimly lit hotel hallway; the Terrific Women series was supposed to look like a gross 1970s cookbook. One of the first comments on our blog was "sorry, but this looks gross," and we said, "thanks!"