How to Food Style Waffles and Pancakes

As the saying goes, you eat with your eyes first, so it's important that food bloggers develop their food styling savvy. In our Food Styling series, Lisa Bolton shows you techniques for conveying the stories you want your food to tell. Her advice will help you create food photography that entices readers to make your recipes. This month she shares her tips on how to food style waffles and pancakes for the camera.

Most food bloggers know the popularity of their content can be as much about the accompanying photo as the recipe. The dish can be perfectly constructed and taste delicious, but it’s the story the photo tells that draws the reader in. And while much like art, food styling is incredibly personal and subjective, there are a few styling techniques that will help project the story you're trying to tell with your food.

First, it's been my experience that waffles and pancakes are best shot cold or at least at room temperature. If you attempt to style pancakes and waffles while they're still warm, they tend to steam and become limp.

Waffle and pancake recipes are easy to double up so my approach is to make them ahead of time and refrigerate or freeze them. Even if they get covered in syrup or whipped cream, I still freeze them and get no complaints when they're warmed up for weekday breakfasts. In our home, we eat what I cook, style and shoot. Zero waste.

Waffles and pancakes pair well with "wet" garnishes — syrups, whipped cream, yogurts. If you're going to be taking or setting multiple scenes, capture some "dry" shots first (pancakes without syrup, for example) as once they're dressed, the texture and appearance will change. 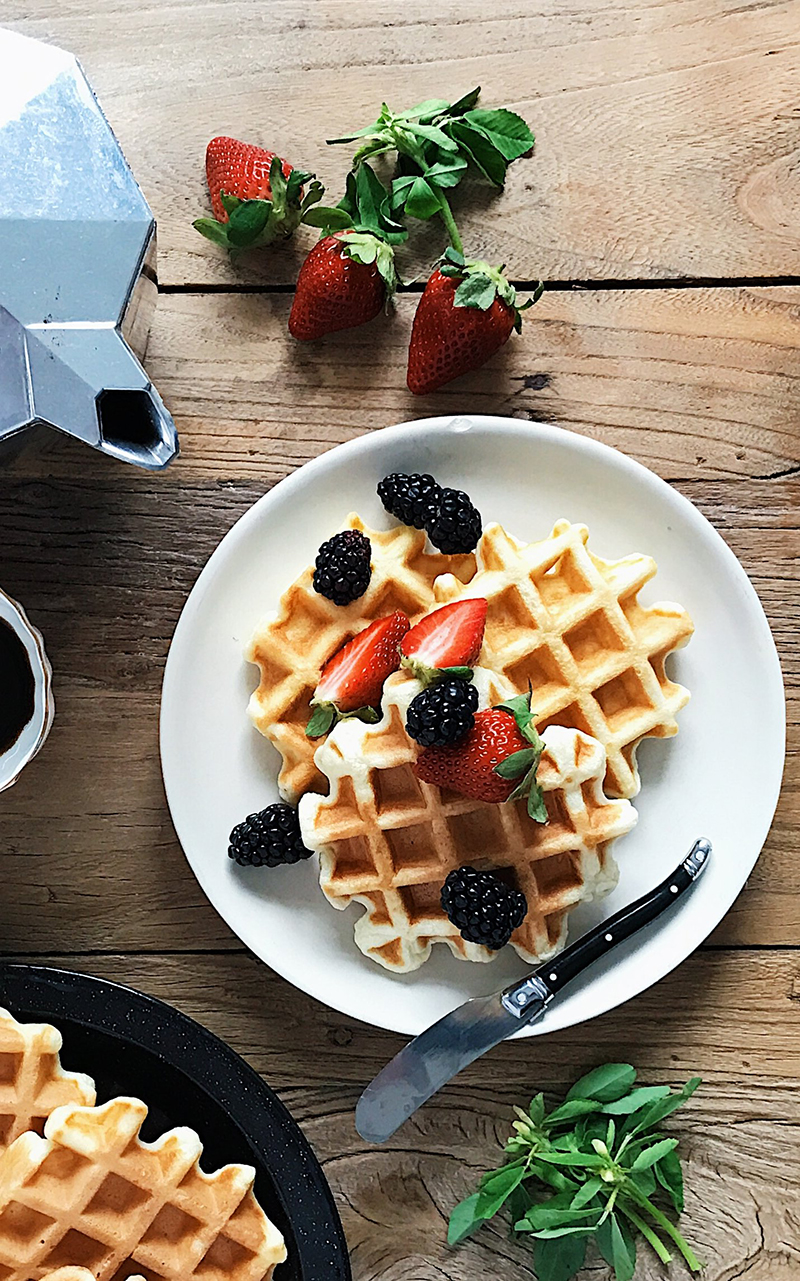 While pancakes and waffles have many similar styling elements, there are some key differences.

The similarities are most evident in the storytelling; both are quintessential Sunday morning breakfast items. The thought of waffles and pancakes awakes our senses to the sound of bacon crackling, the aroma of fresh coffee and the sight of the table set with syrup, berries and whipped cream.

Their differences are the punch line of an old joke.

What do you call a pancake with abs? A waffle!

The texture and thickness of a waffle suit an overhead set-up. Each square crevice is the perfect resting spot for a random blueberry or a drop of syrup to run through. A 15- or 45-degree angle also works, but I find unless you are layering significant portions of whipped cream or yogurt between the waffles, the straight on (0-degree) angle doesn’t do the waffle justice. Show off those abs!

Unlike waffles, pancakes are more difficult to style from a bird's-eye perspective. Flapjacks tend to be thin, flat and brown, and lack much movement. What they do have going for them is height. Everyone can find appeal in a tall stack of pancakes. 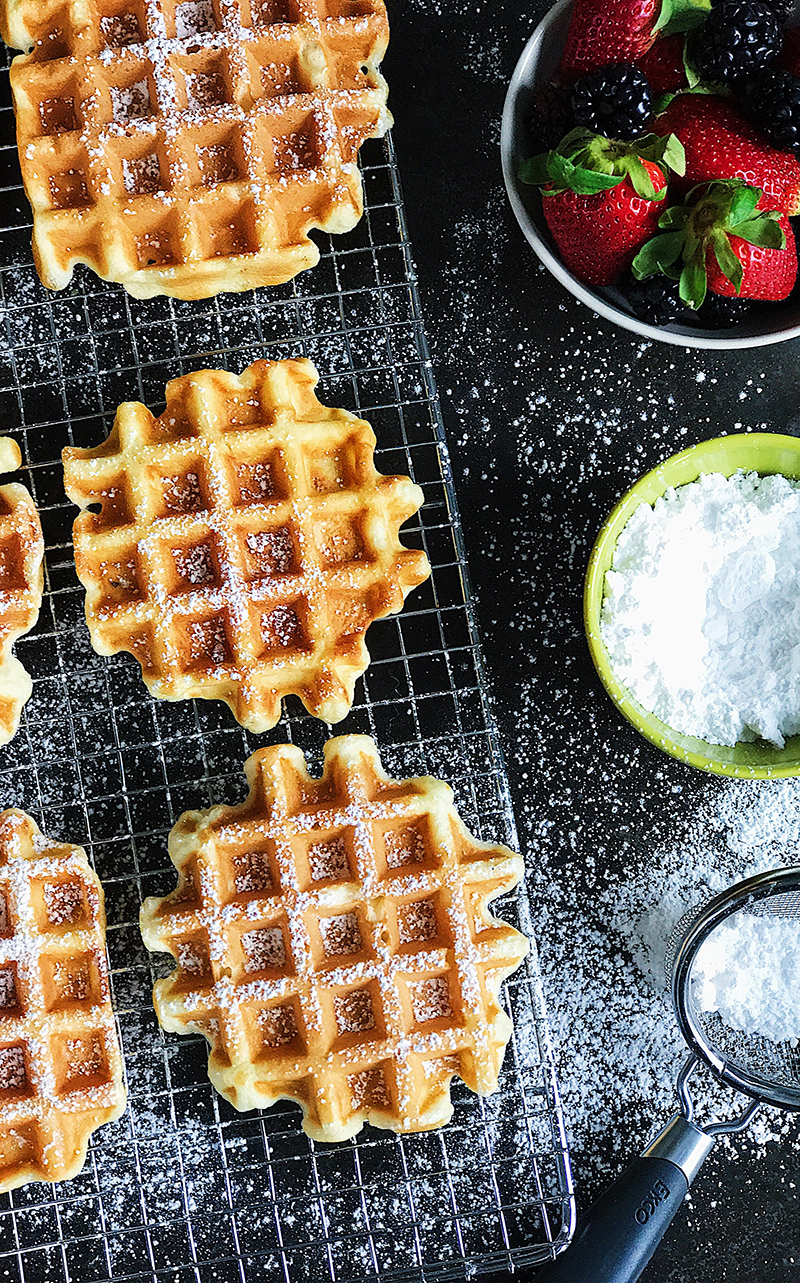 Consider Your Mood or Story

When I approach styling, my first thought is the mood or feeling I'm trying to convey — light and airy, moody, romantic or sterile, for example. In this first picture I wanted the feeling of warm waffles, right out of the iron. I chose a black background for contrast over a wooden one to avoid blending in with the brown tone of the waffles. If your waffle iron is interesting, it could make an appearance in the shot as well.

A dusting of sugar "pops" on the waffles. Because the waffles are cold the sugar doesn’t melt into them like it would if they were warm.   This is a more “messy” look as I wanted the sugar to fall where it naturally would.

Waffles are a great place to start experimenting with different styles because once the waffles are cold, they're firm and can be moved around and manipulated (easier than a constructed burger, for example).

If your preference is more sterile and clean, this next photo is an example of that style: 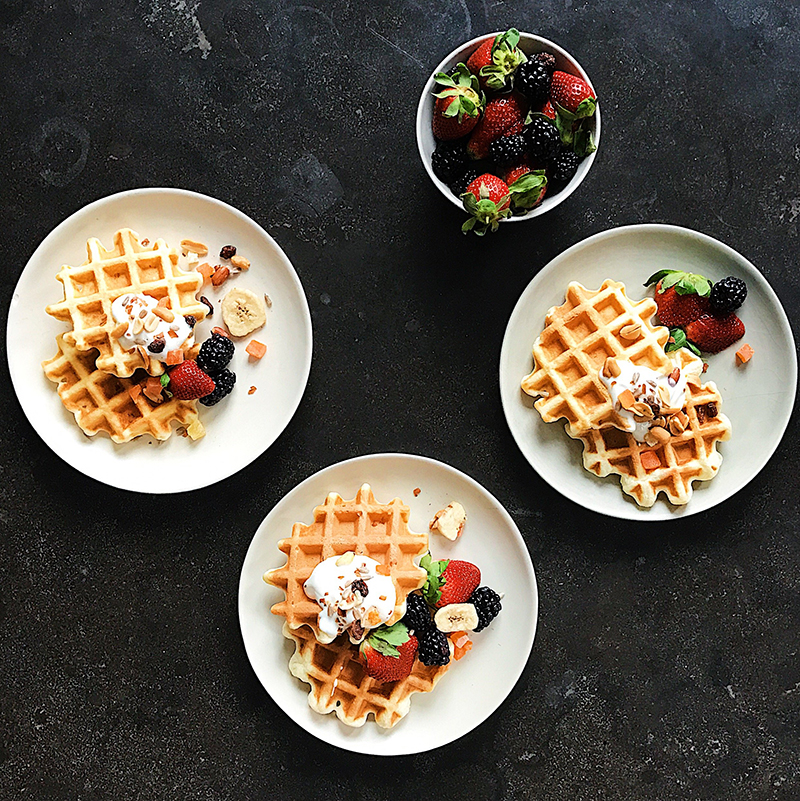 The Rule of Threes

The rule of three applies: odd numbers are more visually appealing. In this case the intent was for the eye to start at the top and follow the berries and yogurt down to the left and then down again to the right.

I intentionally left out cutlery, napkins and other space fillers. 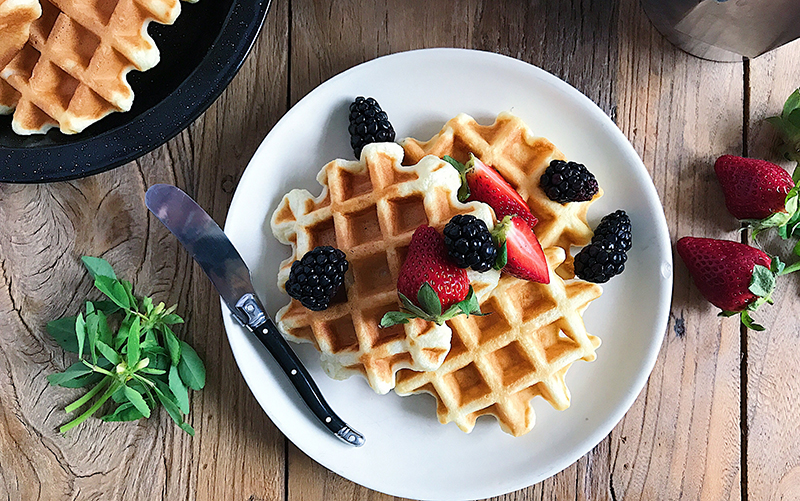 In this next picture, I created a more romantic scene.

I reserved a bit of leftover coffee from my morning pot and just topped it with water for this shot. I removed the bottom carafe portion of the Bialetti coffee pot to keep it lower in the frame.

And while professional food stylists may have an herb garden to choose from, my crisper was looking a little lackluster. Fresh mint would have been my first choice, but no such luck. I did have some fresh fenugreek though. And while it is NOT something we would have with our waffles, I felt the table needed a punch of colour and fenugreek is not common enough that the average person would pick it out. I would NOT put rosemary or basil, for example, on the table for sweet waffles. If I had some fresh flowers in the house, it would be nice to add a few stems across the table.

I style chronologically based on the need to add wet accompaniments to the dish.

PRO TIP: Once you've added a lot of syrup you can't go back, so it's best to work through dry or lightly dressed shots before you go for the really syrupy ones. 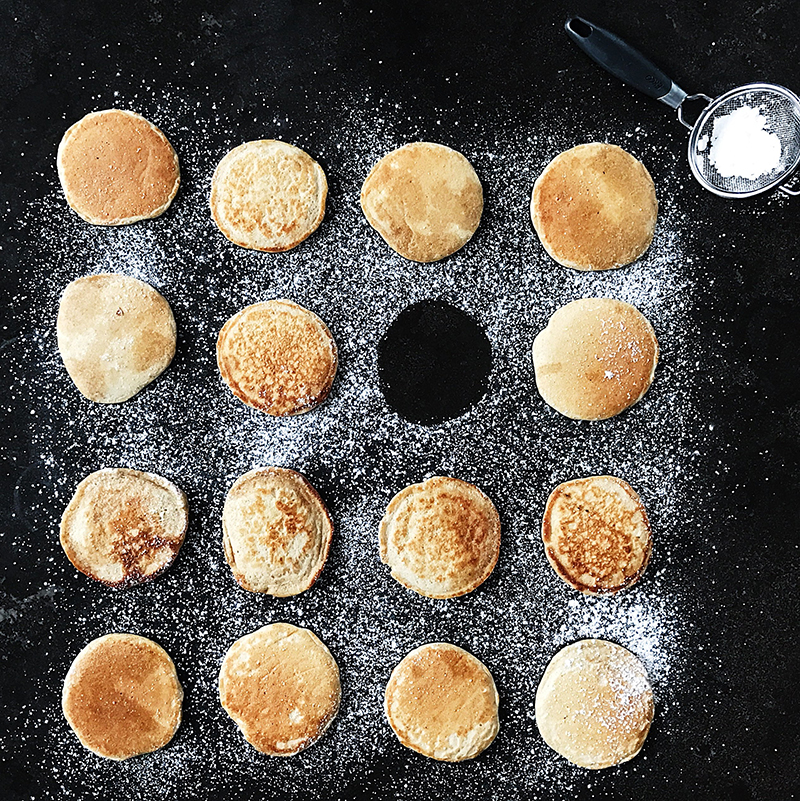 This first shot is just whimsical. Being a food blogger, it's important to get the most content out of everything you cook. It's not practical or realistic, but it is artistic without fussing or propping.

Adding Movement & A Human Touch To Your Photos

The next set-up is similar to the waffle table shot except for the addition of the human element.

I like to create movement in my photographs and pancakes don’t have a lot of movement (unlike soups and sauces). By just pooling the syrup around the pancakes and adding in two arms you get a much more emotional scene. I was able to use the same props I did for the waffles, but this time added milk and granola.

PRO TIP: Just a hand holding a mug or reaching for a strawberry can completely change the feeling the scene conveys. 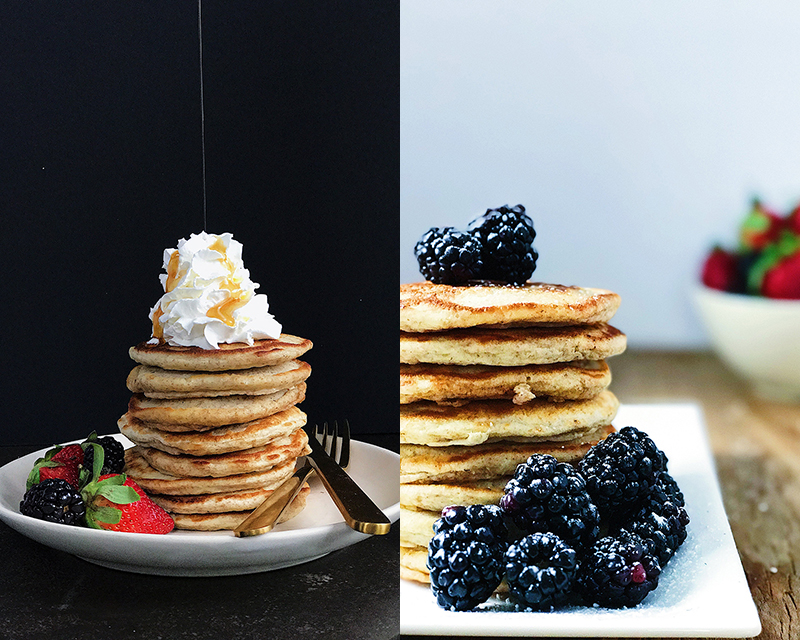 The next two shots are both illustrating the stacks.

The first I would call more juvenile or childlike and the second more mature. Height upon height is what you get with the first scene.

PRO TIP: When you stack the pancakes, if they still feel too limp, insert a food-safe piece of cardboard between every couple of layers for firmness.

Have everything set up without the cream or syrup at this point and take a few pictures to see how it looks. Whipped cream melts and syrup drips, so you want to know you have the look you're going for before you add those perishable elements. 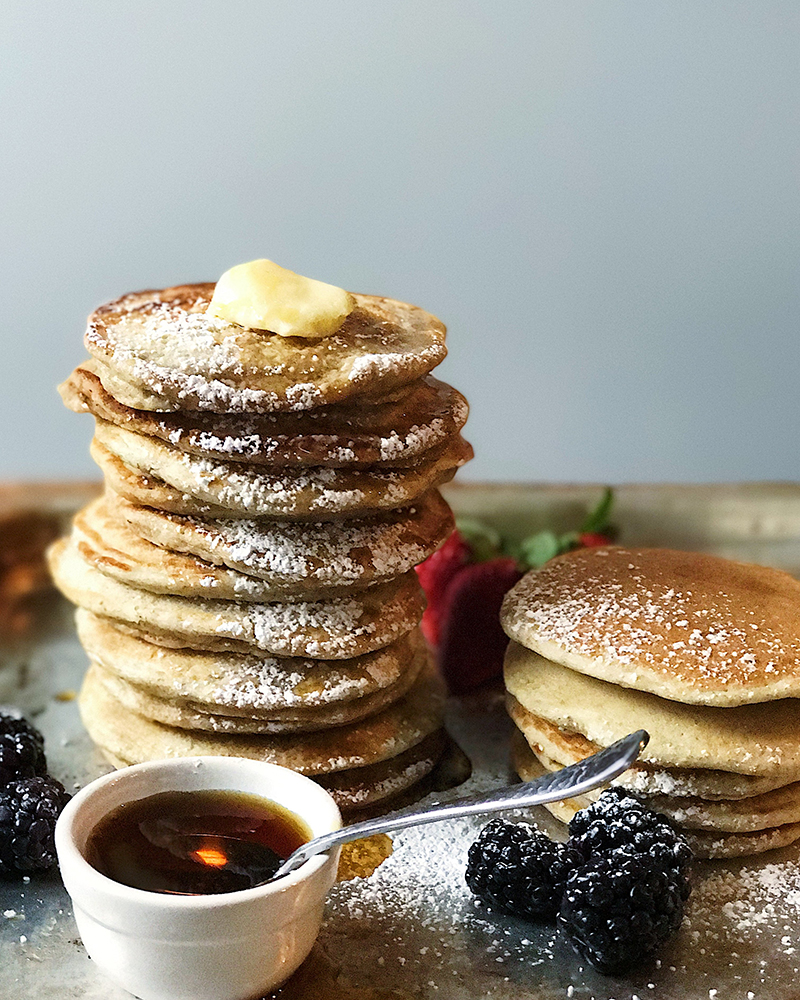 Old sheet pans are one of the best props to have on hand. If they're shiny, tarnish them up with steel wool, bake them with butter and run them through the dishwasher. They're great backgrounds both vertically and horizontally.

I tend to prefer a wider angle set-up but pancakes can be great to get in close. I think the appeal of the pancake is the stack, so getting in close to show all those brown edges can be very beneficial in the shot.

Unlike the seven-layer, iced birthday cake, waffles and pancakes are two perfect foods to start experimenting with your plating style. They're easy to make in large batches (and remake quickly if need be!). Start simple and add layers to the shot methodically and gradually. Your eye is the only eye that matters — enjoy the process!

Lisa Bolton is the creator, writer and photographer behind Food Well Said, her blog about bringing thoughtfully prepared, whole food recipes. She lives in the Lower Mainland of BC and you can reach her on Instagram, Twitter, Pinterest and Facebook.

Thanks for sharing your styling tips.