How To Make A Cooking Video: Getting Comfortable On Camera 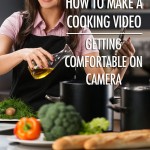 One of the biggest challenges with making cooking videos is getting comfortable on camera - especially if you want to create cooking show style videos. We've put our best tips together so you can be the star of your own videos in no time at all.

With video becoming more and more popular with brands and food blogs, more and more of us are asking "how do I make a cooking video?"

It can seem a bit overwhelming at first, just like picking up a DSLR did when you made your first tentative steps into the world of food photography. But many of the principles for making a cooking video are similar to those of food photography: lighting, angles and styling. And there are some new pieces, like sound, movement and ... queue the music from "Psycho" ... being on camera!!

For a lot of people, being on camera can be terrifying. I know, because I'm one of those people! But, thanks to two amazing high school drama teachers, I got over it (thanks Mr. Bryson and Mr. Vint!) and you can too. Don't get me wrong, I still get nervous and I still practice a lot but I know I can do it and the world won't end!

As bloggers we're used to being behind the scenes, doing our thing in relative peace and privacy. A lot of us hate having our photos taken, never mind being on camera. And even those of us who don't mind posing for the odd selfie can find ourselves completely frozen and tongue tied when video is involved.

So what to do?

Fear not … you can be comfortable on camera! Here are some of our on camera tips to help.

Be Yourself — Just Be a Bigger Version of Yourself

Be yourself — we've all heard that 10,000 times when it comes to video. Tells us something we don't already know, right?

The one part that nobody ever mentions is that being yourself on camera is great, but you need to be a bigger version of yourself.

That's right. You need to ramp your personality up about 10 notches. The quieter and more reserved you are, the more you have to ramp it up. You need to be you but you need to be a louder, more animated, clearer speaking version of yourself.

It's going to feel really weird the first time you do it. And probably for the next 20 or 30 times you try.  You're going to feel like a silly overacting clown (don't worry about it, the feeling will go away as you practice).

So, don't change your personality, just make it a more exaggerated version of you. And the more you do it, the more comfortable you'll become and the more it'll be second nature to raise your energy level as soon as "action" is called!

Film Yourself and Watch it Back

Film yourself and watch it back and notice your little quirks — we all have them.

I'm terrible about making eye contact with the camera; my eyes dart back and forth when I'm not talking. So now when the camera turns on I make a conscious effort to look right into the lens. Where do your eyes go?

Others realize they have a verbal quirk, like saying "like" or licking their lips. Do you talk too slowly? Or too fast?

What do with your hands? Do you move them or are you frozen to your spot? One of the hardest things for actors is knowing what to do with their hands if they're not using them in a scene! What about your posture? Do you fidget?

You don't notice these things until you actually see yourself on camera so it's really important to film a few rounds and see what you look like on camera and what you can fix.

Don't Be Afraid to Move

Video is about movement. If not, we could just photograph things. It can be really easy to come across as robotic, awkward or look like a statue on camera if you stay still.

Don't be afraid to move. Use your hands as you talk. Have props handy: a pot you can stir, something you can spread, grate, or chop while you talk. Did you notice in the "Star of the Show" videos I was always holding a plate of cookies? They were my security blanket so I didn't have to worry about what to do with my hands!

Do NOT Read a Script

Don't read a script. There's absolutely no way to hide that you're doing it. Even the pros on "Saturday Night Live" can't hide when they're using cue cards and it looks awful. If they can't hide it then you can't either. If you have things you want to say and you're not comfortable winging it (and few of us are until we get really comfortable on camera), then memorize them and practice them over and over again.

Don't talk in a monotone. Again you might not even notice you're doing this until you watch yourself back.  Practice what you want to say and how you want to emphasize certain words. If you've ever taken music lessons or acting classes, think back to what you learned about phrasing: pausing for emphasis, accenting certain syllables, et cetera.

Stop Worrying About What Others Will Think

Don't be afraid to get silly. If you want to make people laugh or entertain them, you have to stop worrying about what they'll think. That will freeze you up faster than anything.

And here's the thing … you might feel like you're overacting or doing something embarrassing, but odds are really good you're the only one who'll think that. Everyone else is just going to think "Wow, that was really fun! What else has she done?"

Practice On Your Own

Which leads to … practice! Practice practice practice. Practice over and over again. Do it in the mirror first if you're still a bit shy with a camera. Then film yourself. Keep practicing until you don't feel that jolt in your stomach when the camera goes on.

Practice pumping up your energy levels. Practice moving, practice speaking clearly. Try using Instagram Stories and live video or FB live video or the Periscope app if for nothing more than to get comfortable on camera and at thinking on your feet in front of an audience.

Follow these tips and you'll feel much more comfortable in front of the camera in no time flat!

How To Make A Cooking Video: Tips For In Front of the Camera was written by FBC Co-founder and Managing Editor, Melissa Hartfiel. Melissa would like her parents to know that those four years of high school drama classes actually did pay off!

SUBSCRIBE TO GET YOUR FREE SPICE BOX EBOOK
You are subscribing to the FBC Food Lovers Newsletter.
You can unsubscribe any time!
Click Me
29shares

Hehe! Great advice, Melissa! Oh lord I took drama in eay high school. I was terrible, a frozen in time actor. I’m terrified of video but weirdly never thought to practice – just like any other skill! Thank you for this timely piece! 🙂

Great article Melissa…again, you are my “go to” for all answers in this food biz!!! ?

This is really good advice thanks a lot! B.T.W. There’s a typo in the section do not read a script.

thanks for the tip – all corrected now!

thanks for the tips.

As someone who occasionally had to do TV interviews in a previous life I found this right on the mark. Wearing the right clothes, (something one is comfortable in) or perhaps having a signature look are also things to consider.

Clothes are a big one – sometimes things you love in real life can look totally different on camera!