Chef Alvin Leung and a Recipe For Sweet & Sour Chicken

We had the chance to ask the self-proclaimed "Demon Chef" (aka Chef Alvin Leung) from MasterChef Canada questions about living with Type 2 diabetes, National Diabetes Awareness month and his latest gadget which goes around the world with him to help manage his diabetes. He was also kind enough to share his newest recipe for a healthier take on the classic, Sweet & Sour Chicken.

When were you first diagnosed with type 2 diabetes?

Six years ago. I was really, really sick. It was a stressful day. And I thought I was having a stroke or a heart attack. I went to the hospital. So they did all the check-up and found out that…the good news is, “You don’t have a heart attack, you don’t have a heart problem. But the bad news is that you may have diabetes.” So, it was a sick feeling.

Did you think it would drastically change your life?

Absolutely, definitely, 100% because my grandmother died of diabetes. I remember she went to the hospital. I was very young then. And my father said “they may have to cut her legs off”. And the next day she passed away. So there’s one [experience]. And my father was a diabetic so there was very little dessert and sugar in the house because of that. And of course that made me more hungry for sugar when we were out of the house, because we couldn’t have that [at home] when we were children.

So I wasn’t aware of what to do…but I was aware of the potential outcome and also…getting your legs cut off, going blind – [outcomes that] a lot of people were unaware of, I knew that. And I knew [it meant] no sugar, no starch, so he [Alvin’s dad] wasn’t allowed to have a full bowl of rice. And he loves to eat and I love to eat. So I was really preparing myself to be in for a big big change in lifestyle. And not for the better. But it happened to change this for the better [sic].

Just because, I was overweight, I wasn’t exercising and I changed my lifestyle. And I think by doing that, because of diabetes, I’m actually enjoying life more now.

Have you noticed misconceptions people have about diabetes that aren’t always correct?

Ok, I think the number one assumption is that you just have to cut sugar and that’s not true. You have to cut your carbs, notably your starches – especially the ones with high GI. Such as white rice, pasta, glutenous rice. I love sticky rice – that’s definitely off the diet. Fruits – you know people think…no sugar in your coffee but go ahead and have watermelon, bananas, and I’m just naming them because they’re probably the worst in terms of the UI diet, the UI range. And you know, I live in Asia and there’s so many great fruits in Asia. Mango, lychee, durian if you like it and all these are forbidden or off-limits.

Having diabetes and checking your blood sugar levels is extremely important, how has technology helped you in this regard?

First of all, in the old days, you had to prick your finger twice – at least. Once in the morning to get the flashing. And then in the midday or any time after you eat to get an indication of what your sugar/glucose level is. Number one is – I hate pain, so doing that to myself was really difficult. And secondly – the one in the morning was easy but the one in the afternoon…you know get an open wound and you’re inside a kitchen environment. That is a no no. It got to a point where I just stopped doing and said, “hey, I'll take my chances”. Now, with the Abbott Freestyle Libre (FSL) glucose monitoring system, I just do it one. It’s neat, it’s clean. It’s relatively painless. I have fun. It’s like a new toy. Instead of twice a day, I’m doing it twice an hour. And it’s not just to monitor or to track. To me, it’s also a safety blanket. It’s reassuring.

(editor's note: FSL is a sensor which is approximately the size of a toonie and a reader smaller than the size of a smart phone to quickly monitor a patient’s health. Receiving its Health Canada license in June 2017, this non-evasive technology means that Canadians with diabetes will no longer have to routinely prick their fingers to check glucose levels)

How has the FSL made life easier for you in the kitchen, traveling, on-set, etc?

When you see results, you become proud and when you’re proud, you stick to it. So it’s a fantastic system. And it motivates people. By being able to see what is going on (which means you have total control of yourself), it motivates me to keep on my diet. It’s like a scale when you go on a diet. Every time you step on a scale [and you see you’ve lost] an ounce or two once or whatever and you see your numbers are going great, you say “hey, it motivates”, I mean honestly. And that’s one of the assets. Not only is it informative but it also motivates me because you see great results.

Q - What other types of technology do you love to use in the kitchen?

The kitchen tap! It’s hard to make anything without water. But seriously, as a chef, it’s about using what you have available in front of you.  These days, I think there are a lot of technological innovations…which is why it’s so easy to execute recipes now. And I’m not going to selectively name specific ones. There’s always a lot of new equipment that makes the job more precise, and more consistent. I do like to use gadgets, provided the space is available. But remember, all these gadgets are just modified versions. At the end of the day, it’s not about the gadget. It’s about gadgets that makes sense with how you’re using your knowledge, creativity and skills.

Can you provide any cooking or culinary tips for those living with diabetes?

RELATED:  Get Dressed and Win With New OPA Pourables and Litehouse

Well I think you gotta find some recipes so you can go and try to use ingredients with low GI (Glycemic Index). And if you go to any website, you will find them. And you don’t have to worry about the meat and the fish. It’s the starches and the fruits. You can try to use natural sugar. A lot of times when you cook, you don’t want to use artificial sugar substitutes or [fruit substitutes] because some of them are quite nasty to eat. And all you have to do is just make it low sugar rather than making it sugarless. I mean, soft drinks, ice cream, you can [choose sugarless options], but cooking, when you start to make it sugarless it starts to get not tasty. It doesn’t work if you don’t enjoy it.

So I have developed one recipe and there will be more coming, using ingredients with GI less than 55. So that includes starches, fruits, juices…and I’m not doing steak recipes or salad recipes. But a lot of times, lots of savoury treats have high sugar content to them, it doesn’t have to be desserts. So, like sweet and sour pork. I did a sweet and sour chicken recipe, which I found very very tasty and healthy. So yeah, I’m doing recipes. But I want tasty recipes. Not boring or bland ones.

November was National Diabetes Awareness month. What do you want people to know about diabetes?

By having control of your life, your lifestyle doesn’t have to change in fact it can be better. And one of the ways to do that is to track your blood sugar. And for me, the FSL is something that you must have.

For people who do not have diabetes – you’re lucky, you’re fortunate. For the people who don’t have diabetes, be aware and watch out because you eat food. Because if you keep on living an unhealthy lifestyle of excessive sugar, starch, the chances of you getting it are huge. So that’s my message.

And also it’s a disease. And it’s a disease that [can cause people] to lose work days, work hours. It’s gonna cost a lot of money. Lost work days, and serious hospitalizations. You have people with type two that go regularly. It’s gonna cost a lot of money. So my message is, be prepared and try to avoid it. And for the government, try to look at this very, very seriously.

What else is going on with you these days? Any exciting plans that you can share with us?

I’m doing MasterChef Canada Season 5. It’s going to be fantastic. I’m almost finished filming it so I’ve got one more day to go and it’s gonna be a super season with a lot of new challenges. And it’s going to be very exciting. I am shooting a couple new shows in Asia. I’ve opened five restaurants this year: Korean concept, I have a duck concept, Spanish concept. So I’m enjoying life. I enjoy each show. It’s a lot of work – I’m up to my neck with work. And I’m doing it with diabetes. 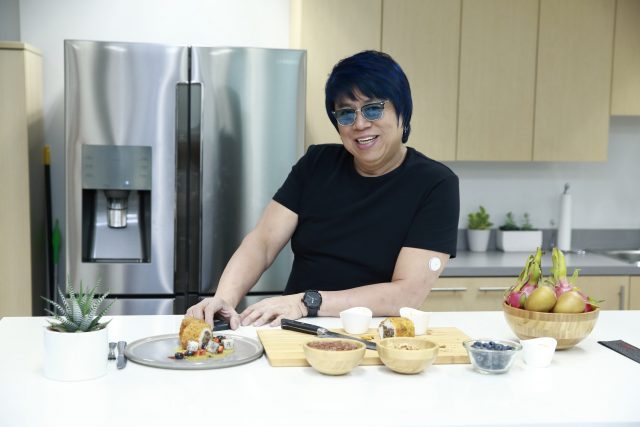 Print
A healthier and diabetes-friendly take on Sweet & Sour Chicken. All fruits and starches with GI (Glycemic Index) less than 55
Ingredients
Instructions
3.2.2925