One Curious Ingredient: Learning About Gochujang

What is gochujang? What's it used for? Should you have it in your pantry? In our monthly column, One Curious Ingredient, Michelle Peters-Jones explores the history and culinary use of ingredients or dishes that are unfamiliar to her — and probably many of us!  Previously in our Food Trends TV column we highlighted gochujang, the Korean hot pepper paste that's growing in popularity in North America.  Today, we're taking a closer look and learning more about gochujang. 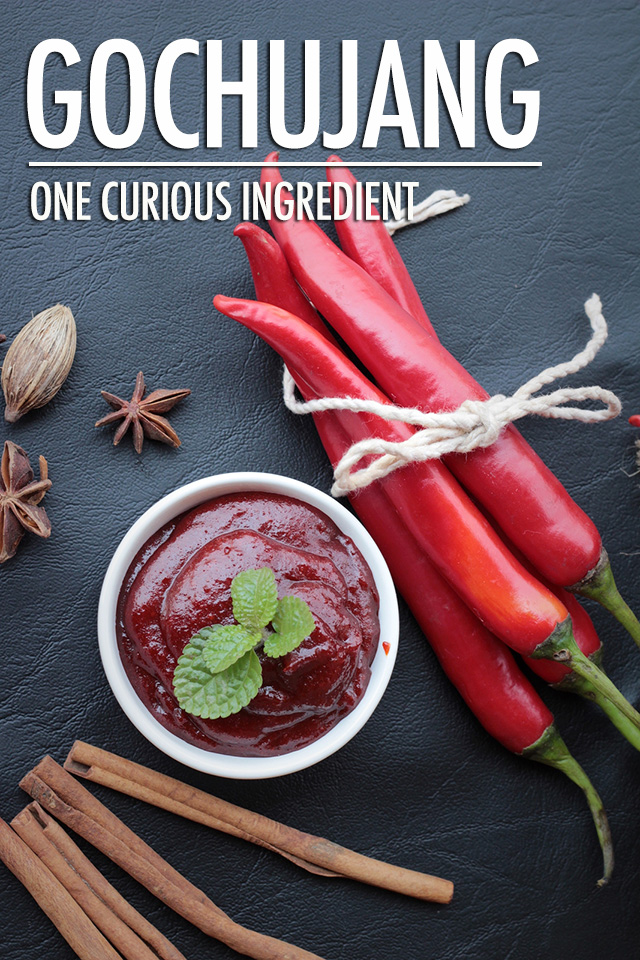 One of the things that fascinates me about food across the world is the preponderance of similarities between cuisines and the culture of food and eating.

Partly the consequence of early trade and travel and, in more modern times, that of globalization, food has always been a deep connection between people. To share food is to share bonds that help us understand each other. In more practical terms, with the whole controversy swirling around cultural appropriation, it's a fascinating look at where our food comes from, and how our backgrounds have affected our relationship with said food and culture.

Take, for example, hot chili sauces and pastes. Pretty much every culture in the world has its own version of hot sauce. Whether it's North African harissa, or Indian masala, or Louisiana hot sauce, or Thai nam phrik, or the Sri Lankan sambal, or even the currently ubiquitous Sriracha, hot sauce pretty much transcends borders. So this month's curious ingredient, for me, was gochujang, the Korean hot pepper paste.

Coming from India, I usually have no problem pronouncing the names of unusual ingredients, but it took me a while to start pronouncing gochujang correctly, even with the help of a Korean friend (at this point, I had a little bit of sympathy for my husband, who tried his best to pronounce vazuthanangapal curry, an eggplant dish from India). But eventually I managed to get it right, and also ended up chatting about it with my friend's mother.

In its simplest form, gochujang is a Korean fermented hot chili pepper paste that can be used both as a condiment, when mixed with other ingredients like oil or sauce, and a cooking ingredient.

Unlike a lot of hot sauces, which are made mainly with chilies and vinegar, gochujang also contains — along with gochu (Korean hot peppers) — sticky glutinous rice, fermented soy beans and salt, which is what gives it that addictive, umami taste.

What's interesting about gochujang, is that the variety of gochu, or chili peppers, that's used to make this paste is very specific to Korea and has to have a mildness and a certain level of spice. So, unlike a lot of other hot sauces, gochujang cannot be made using just any chilies.

A recent paper claims that unlike the chili peppers used in Indian, Thai or Mexican cooking — which usually are of Central and South American origin — the Korean gochu is a biologically different variety, and has been cultivated much longer than chilies that were brought over from the new world (Kwon et al., 2015).

RELATED:  The Spice Box: Getting to Know Star Anise

The original gochu chili seeds were thought to have been brought over by migratory birds, after which they became a staple in Korean cooking and, in particular, in the production of gochujang.

This lends itself to a fascinating history of this pepper paste, which is quite unlike others, being produced a few hundred years before the arrival of other chilies in Asia.

Gochujang isn't your run of the mill hot sauce where the focus is on the heat! Gochujang paste has more flavour depth that comes from the addition of the rice, fermented soy beans and salt to the gochu peppers. This gives it a true umami taste that's both spicy, salty and a little sweet.

It's this depth of flavour that makes it so much more than a hot sauce!

What Is Gochujang Good For?

Despite its popularity, people do get confused about the usage of gochujang paste. In Korea, as recounted to me by my friend's mother, gochujang is used in a lot of dishes to add spice and depth. When used as a condiment or sauce, it's usually mixed in with other ingredients like sesame oil, soy sauce or sugar, to cut through its "raw" taste.

As a condiment or sauce, it's served with quite a few Korean dishes, including the popular bibimbap and ssam jang (a sauce that's known to accompany Korean barbeque). It's also used in everyday Korean dishes to add flavour and heat, including meat and vegetable soups, stews and marinades. Like a lot of other seasonings, it's best to add it a little at a time, until you like the flavour it imparts. If you're looking for ways to use it, take a look at these 20 Recipes Ideas For Using Gochujang.

Where Can You Buy Gochugang?

Gochujang is available in most Asian markets and grocers, usually in rectangular, red plastic containers. A couple of popular brands are Haechandle and Daesang Sunchang. Sunchang is in the southwest part of Korea, and this area was considered one of the best in producing the Korean gochu used for gochujang. It is also mentioned in older writings about gochujang.)

And finally, did you know that gochujang is part of the newly launched gastro-diplomacy program of the government of South Korea to increase awareness about Korean food as well as encourage more people to visit Korea as part of their food tours? They don't have to convince me much!

Have you used gochujang in any way? Let us know in the comments, including a link to any recipes you’ve posted!

SUBSCRIBE TO GET YOUR FREE SPICE BOX EBOOK
You are subscribing to the FBC Food Lovers Newsletter.
You can unsubscribe any time!
Click Me
204shares

I can’t find Dapsang Sunchang. Is it Daesang sunchang? I found Gochujang by Daesang Chung Jung One on Amazon.