In our monthly column, One Curious Ingredient, Michelle Peters-Jones explores the history and culinary use of ingredients or dishes that are unfamiliar to her — and probably many of us! Today, Michelle takes a closer look at something that sounds like nuts, but don't let the name "tigernuts" fool you! 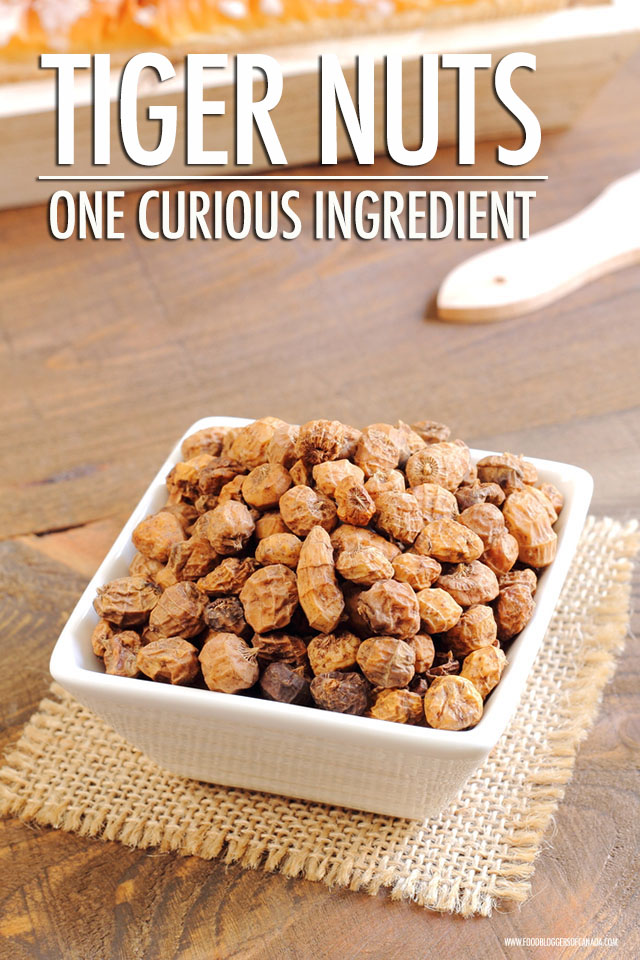 When Melissa asked me to write about tigernuts as this month's One Curious Ingredient column, I assumed — as I'm sure many others would — that tigernuts were a kind of nut.

To those who follow a paleo diet this ingredient is probably pretty familiar to you already. Food trend expert Dana McCauley has showcased them as a potential trend on one of her Food Trends TV instalments.  But as I delved deeper into this curious ingredient, I was intrigued to find a whole new world of food opening up to me.

First off, tigernuts are not nuts at all. Also known as earth chestnuts, earth almonds or yellow nut grass, they're an ancient root vegetable from the sedge family, tubers of what we know as Cyperus grass. These vegetables grow all over the world, though they originated in Africa, and were a source of food and nutrition as long ago as the fifth millennium B.C. In fact, they were so widely consumed in ancient Egypt that they were memorialized in the pyramids as well as in ancient carvings and writings. There has also been evidence of them being found in the stomachs of embalmed pharaohs. The ancient Egyptians also used ground tigernuts as a medicinal ingredient, and it was widely used in ointments and cosmetics.

Tigernuts can be cultivated or grow wild. Cultivated tigernuts are harvested from the roots of sedge grass and are hard, small tubers, either yellow, brown or a dark brown, almost black colour. They're a fast-growing crop, almost weed like, planted in April and May and harvested in November and December. Each plant can have quite a large quantity of tubers, therefore they're seen as a valuable commodity in fighting food poverty and malnutrition in the developing world.

RELATED:  Spicy! Over 20 Ways to Use Gochujang

How To Use Tigernuts

Today, tigernuts are mainly cultivated in Africa and Spain. Tigernuts travelled to Spain via trade with the Arab and North African communities. Called chufa in Spain, they're the key ingredient in a popular drink, horchata de chufa, made with tigernuts blended with water to release their "milk," after which sugar is added to taste. In Northern Africa, the vegetable is ground into breads and also pressed into oil. The grass is also used as a feed for livestock.

Tigernuts have an almond milk-like flavour, with a slight nutty sweetness. To use, these tubers need to be washed thoroughly in cold water and then soaked for at least 12 hours. After soaking, they can be ground or cooked according to the recipe used.

Tigernuts as a Healthy Superfood

Tigernuts are are widely available as a superfood and are seen as being incredibly healthy, which like explains why they're trending up. As a prebiotic, they're full of fibre and are seen as excellent for a healthy digestive system. High in starches, fats, protein, minerals (including  potassium and phosporous), vitamins E and C, and sugar, they're a nutritious powerhouse and seen as a valuable source of energy, comparative to the nutritional benefits of olive oil.

They're also known to help in regulating blood sugars and high blood pressure, as well as fighting cancer and cardiac illnesses. However, like all food products, please consult your doctor before consuming high quantities of this food.

Finally, did you know that Cyperus grass in ancient Egypt was also used to make papyrus?

Have you used tigernuts in any way? Let us know in the comments, including a link to any recipes you've posted!