The Spice Box: Getting To Know Cayenne & Chilies Peppers

Getting to Know Cayenne and Chili Peppers is part of a monthly series here on FBC called The Spice Box. Primarily written by Michelle Peters-Jones, these articles create a spice primer for new and experienced home cooks alike! 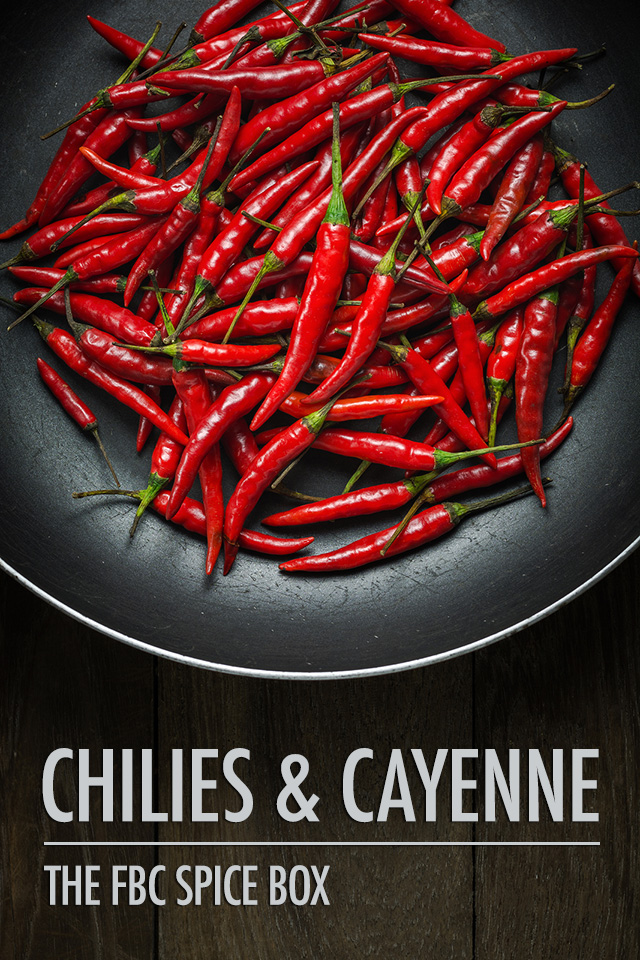 Scientific Name: Capsicum annuum
Varietals: Too many to count

Honestly, I don't know what I was thinking, trying to profile cayenne or chili peppers in just one post here on The Spice Box. Almost every cuisine in the world uses one or another varietal of chili peppers to add mild or fiery heat to their cooking, and to classify them all would be a series in itself.

So, in this column I figured that I'd do a quick introduction to how to use fresh and dried chilies, as well as ground chilies, and then take a quick trip around the world through chili peppers.

Cooking with Cayenne and Chilies

Chili peppers are mostly used fresh, dried, flaked or ground. The heat of chilies is usually measured using the Scoville Scale, with the higher the Scoville number, the hotter the chili pepper. Currently, this title is held by the Carolina Reaper, at a mouth-destroying 1,569,300 SHU (Scoville Heat Units). I think we'll stick with the gentler versions!

Native to Mexico, chilies were spread around the world during the colonial era, with the Portuguese credited with bringing them to Asia. That said, some Korean historians do debate the point. But it's generally accepted that chilies and chili peppers were used in Mexico and Mexican cooking in the first instance.

Seeds are the hottest parts of chilies, so if you want a milder heat, make sure that you start by scraping out the seeds in your chili peppers. If you like it hot, keep them in.

They come in a variety of colours and sizes, and are best stored in the refrigerator, loosely wrapped in paper towels. I have also frozen them quite successfully, though it is worth remembering that frozen fresh chilies will lose some of their heat.

They can be used whole, to infuse a delicate heat, or slit or chopped to amp up the heat levels.

Dried chilies are a pantry staple in my house, and I use a wide variety of them. The usual way to cook with them — like with most spices — is to dry toast them first, to release the oils. Dried chilies can be very delicate, so make sure they don't burn while toasting. They can then either be ground, or used as directed by your recipe.

Flaked chili peppers are dried chilies, crushed into flakes, while ground chili powder is made from chilies blended into a finer powder. Based on the variety of chili peppers used these can be hot, medium or mild.

When using ground chili powder, remember to check the heat levels or your guests might be in for a nice hot surprise.

Chilies Around the World

In this section, I'll focus on profiling a few chilies that are used in countries and cooking around the world. This is certainly not a comprehensive list, but will serve to familiarize you with some of the varieties used.

RELATED:  The Spice Box: Getting to Know Star Anise

Being native to Mexico, Mexican and South American cooking uses a wide variety of chilies. The most common among them are ancho, pasilla, d'arbol, cascabels, guajillo and morita. These chilies are usually used dried, and dry roasted on cast iron comals before using.

Jalapenos, poblanos, serranos and habanero peppers are more often used fresh, and their heat levels vary according to the chili used and how ripe they are. The riper the chili, the hotter it usually is. 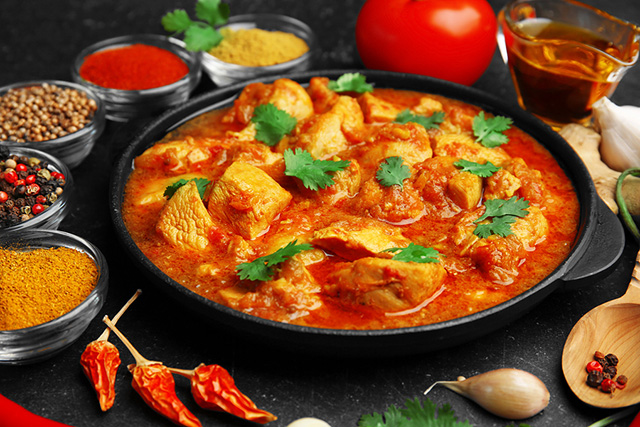 Fresh chilies are used, seeds and all, in curry pastes and hot sauces, as well as to season the finished dish.

Dried chilies are usually soaked in hot water to soften them before being pounded into pastes. Chili powder is not usually used in Thai cooking, but can be present in some dishes and spice mixes.

Indian cooking is known for its liberal use of chilies. Almost every Indian spice mix has some variety of chili pepper in it, with the mixes from Western and Southern India being the hottest.

Fresh chilies are also a staple in this cuisine, again, with red and green bird's eye and a longer green 'finger' chili being the most commonly used. Chilies are added both at the beginning and end of cooking, and some communities also offer fresh green chilies at the table, to serve yourself.

Chilies are also a staple in Middle Eastern cuisine. Turkish chilies like Urfa biber, also known as Isot biber, are toasted in the sunshine and "sweated" by covering at night, flaked into soft, moisture filled flakes and served at the table. Aleppo chilies are also hugely popular all over, and take their name from the Syrian city of Aleppo.

While hot chilies aren't necessarily a staple in European cooking, some cuisines do use versions of them. Hungarian paprika uses a version of cayenne peppers, as does Spanish and Portuguese cooking. Some Italian dishes like Arrabbiata sauce also use chilies to add heat.

Chilies are widely used in Southern cooking, and in making the dish also known as chili. Hot pepper sauces like Louisiana and Tabasco are also a common sight in the Southern states.

And finally, did you know that chilies were grown more as botanical curiosities and as ornamentals in European botanic gardens, rather than as a spice?

Are you addicted to chilies? How hot can you take it? Leave your recipes using chilies in the comments.

I enjoyed reading about the chillies am interested in learning more about your other spices!