Restaurant Roundup heads further east as we continue our cross country tour of the Canadian dining scene.  This week we touch down in Quebec City as Marie Asselin of Food Nouveau treats us to a tour of the city's bistros.

Many people come to Quebec City dreaming of indulging in classic French cuisine. Although part of our culinary heritage does come from the French (yes, we have delicious croissants!), the city in fact counts few classic French restaurants among its offerings, and they are certainly not the best places to sample what our chefs are capable of.

One type of restaurant that’s growing in popularity in Quebec City is what could be called the “terroir bistro.” Just like classic bistros, our new-wave bistros serve moderately priced meals in casual settings. They’re staffed with friendly servers and have a fun, informal, and somewhat raucous atmosphere. The surprise is that instead of rehashing classic bistro dishes, they serve a refined cuisine, one that makes the most of our local ingredients.

The following bistros are owned or led by a younger generation of chefs who are reinventing what Quebec’s cuisine is all about. They’re my favourite places to eat at because their unpretentious nature means you can go on a whim, knowing you’re going to eat good food—really good food—among the very best the city has to offer.

It’s a bit unfair to say Le Clocher Penché is part of a new wave of restaurants since they’ve been around for so many years. They opened in the St-Roch neighborhood long before it was a trendy place to be, and they prioritized using local ingredients long before the term “locavore” was coined. Housed in a former bank—you need to walk through the old, foot-deep vault door to get to the washrooms—the restaurant serves comforting dishes that change through the seasons. Service is faultless and friendly, the wine list is well curated, and the weekend brunches may be the best in the city.

One of the more recent additions to the city’s roster of bistros, La Planque is the home of Guillaume St-Pierre, a winner of Quebec’s Top Chef-style competition, Les Chefs. Because of the chef’s notoriety, the restaurant was eagerly awaited, and it indeed lived up to the highest expectations. St-Pierre’s refined cooking could easily be labeled “fine dining” if it were not served in such a cool atmosphere, and the plates sometimes look like works of art. The finest seasonal produce is put forward and framed with flavours and textures that make every bite a delight. Reservations are mandatory.

Part restaurant, part wine bar, Le Moine Échanson serves what’s probably closest to classic bistro fare: the frequently changing menu includes homemade terrines, generous salads, rich stews, and savoury pies, all served in a rustic but elegant way on wood planks and slates. The restaurant is known for its offal offerings and everything is impeccably prepared. The French-focused wine list is worth the visit alone. Every dish on the menu is paired with a specific wine, most of which are private imports, but servers are very knowledgeable and will always allow you to taste before you decide on what you want to drink. Bottles can also be purchased to go. 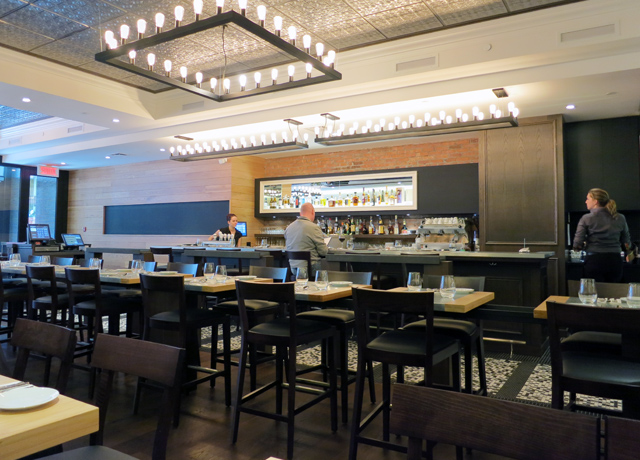 A unique concept in the city, Chez Boulay makes its own, casual version of Nordic cuisine, using “boreal” ingredients such as venison and game meats, foraged vegetables and seasonings, and locally made oils and syrups. Backed by one of the city’s finest chefs, Saint-Amour’s Jean-Luc Boulay, and led by another Les Chefs alum, French-trained Arnaud Marchand, the restaurant serves dishes that are bold in flavour and generous in size, but refined in taste. The minimalist décor is a cross between a Scandinavian café and a French bistro, and the service is slightly more upscale in style. Their weekend brunches are also excellent and very popular.

Probably the most creative concept of the bistros listed here, Le Cercle is a multidisciplinary space that is both restaurant and bar. It hosts art performances, DJs, and music shows, and caters to a crowd that ranges from families to hipsters, all the while managing to make it all fit together. And the food is great too: the Le Cercle owners are in fact active players in the local food community, hosting a weekend farmers’ market, and managing a produce basket delivery service in the summer. The menu features small plates that can be shared or assembled to form a tasting menu, and a large selection of “bites” that go perfectly with their affordable, house-created cocktails.

This article was written and photographed by Marie Asselin, a French-Canadian graphic designer, translator, and blogger. She is the author of food and travel blog Food Nouveau. She lives in Quebec City, QC. Twitter: @foodnouveau