Our Restaurant Roundups  feature a tour of restaurants in cities across Canada. Whether it's satisfying a sweet tooth in Edmonton or tapas in Winnipeg or favourite street food trucks from coast to coast, we celebrate Canada's thriving restaurant scene and talented chefs!  This week Andrew Coppolino takes us on a tour of Waterloo's delicious burger restaurants!

Too often a mundane affair, relegated to industrial preparation and QSR paper wrappers, or reduced to the rattling sound of frozen disk applied to backyard grill, the hamburger can however bust out in many different ways.

And in Waterloo Region, it does just that.

Like most metropolitan areas – and Waterloo Region is the 10th largest metropolitan area in the country – there’s a vast range of burgers in a host of variations and demeanours. We even have an annual contest called Burger Badanga that pits four restaurants in a judged competition for burger bragging rights to support charitable organizations.

Independent restaurants create burgers of distinction here, if so grand a term may be applied to the humble beef patty. For instance, the burgers at Beertown Public House in Waterloo and Cambridge (and London, ON) might have a cool Cali disposition with beef brisket, guacamole, goat cheese and a chipotle aioli.

The Crazy Canuck joint on the border of Waterloo and St. Jacobs has a homemade patty, classic toppings and eponymous craziness with names such as the “Whoa Nelly Burger” – which would be two rather large beef patties.

But let’s look at three in particular, which represent slightly different burger ideologies and personalities.

This is old-school burger preparation in a sports bar-and-grill incarnation with trappings of neon “PBR” signs, sports on television and a gallimaufry of movie and rock concert memorabilia.

At the heart of Fratburger – and a pink heart it is – is a very good, no-nonsense burger in a style that was once delivered to your car window by a grade-10 girl in uniform and wearing roller skates.

It reigns through its simplicity, its meatiness, its ability to trickle juices down your chin and slowly insinuate itself into the very basal ganglia of your food memory.

The menu is small: only a few items from burgers and fries to fresh-made milkshakes. Add “Squeezers,” “Toppers,” “Cheeze” and “Extras” (none of which sounds particularly appetizing, but there you have it). Order just a burger, and it costs you $5. The extras run you a buck an item.

Fratburger has a meat grinder inside a walk-in that’s used two or three times dailty for grinding locally sourced beef – three different cuts, in fact. They won’t disclose the proprietary mix, but baseball-sized hamburger domes sit happily in the fridge ready to meet the hot flat-top and get seared to heaven.

And sear is the key culinary point. You don’t get it with a grill; you only get it with a good, hot slab of metal that results in two important effects: a nice, slightly crisp, brownish-black Maillard reaction on the outside and a soft, meaty, juicy texture on the inside. Ask for the burger to be cooked only to slightly pink inside and you’ll get more deliciousness.

I’ve tried Fratburgers in several permutations with blue cheese, peameal, guacamole, mushrooms; I’ve had one with just cheese; I’ve gobbled one with a fried egg, but the most enjoyable way is absolutely plain. Get naked and taste the meat flavour, the simple peppery seasoning. Enjoy the textures – and let the juice run down your ganglion.

The bun similarly draws on purist burger ideology: the school of thought that advocates for a good sturdy burger bun with a heavier crumb and a thicker crust will have no truck here. Fratburger uses old-school light-bodied, white-bread Garfield “Wonder” Weston buns to sop up juices.

It’s no nonsense; it’s a simple burger-shop formula simply executed with thought and by following simple principles. The burger-ideology, you see, is simply nothing to be trifled with – at the same time that it needs not be fussed over unnecessarily. Juicy-meaty speaks for itself. 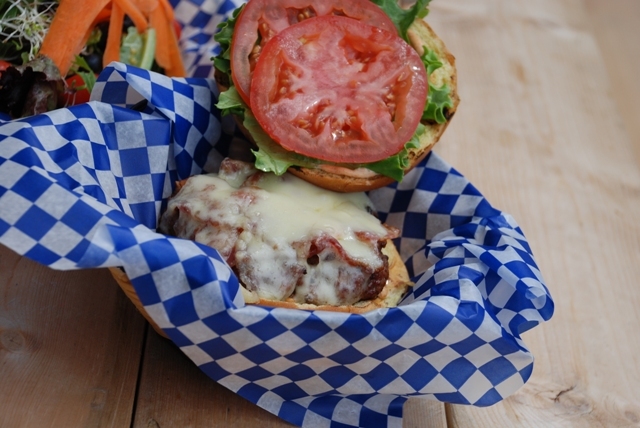 This is a “new” old-school burger – inventive and zany at times but always well executed and deliciously prepared. And broadcast quality: Little Louie’s has been just recently featured on Food Network television’s “Ya Gotta Eat Here.” And so it should.

The small venue is tucked in amidst a residential neighbourhood in Cambridge, Ont., and makes one mean hamburger and mighty fine fries.

Chef Steve Allen, a son of Nova Scotia, found a perfectly quirky building that was possessed of the exact character he wanted for a place with the improbable handle “Little Louie’s Burger Joint & Soupery” (LLBJS).

RELATED:  Where To Eat This Weekend: PEI Edition

Here’s how LLBJS works: go to the counter and take a little clipboard and golfing pencil and fill in five steps. Add your name. Mark “dine in” or “take out.” Choose 5-ounce or 8-ounce burger, or double beef slider. Veggie options available.

The burgers are perfect: good quality freshly ground beef, not burdened with additives and filler and cooked properly. A butcher around the corner grinds the beef – LLBJS picks it up daily.

Allen prepares the burgs with his own recipe (and ideology): he’s of the school that adding a few proprietary ingredients really boosts flavour. Moist and tender inside, the burger meat has not been overworked and beautiful clear juices slowly trickle down the meat with just the slightest, ever-so-faint hue of pink inside the crisp browned exterior of the patty. (God bless Mr. Maillard.)

Then there’s a fresh, soft Challah-like bun with its sweet hint of body enough to corral luscious juices.

The quirkiness of the Little Louie’s building, the pylon sign and the gravel parking lot will remind of road-side burger joints you pass en route to cottage country. However, the drive to Cambridge for LLBJS’s top quality burgers and fries is a lot shorter. The vacation is in the flavour. 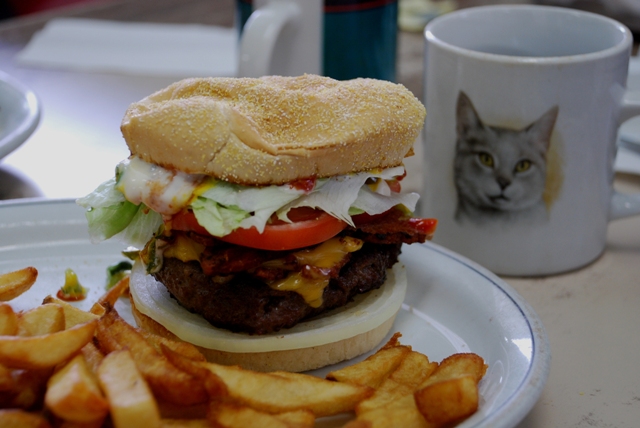 This greasy spoon-cum-diner is a Kitchener institution. It hasn’t changed since the day Jimmy opened it. The menu is limited (there isn’t really a menu), but they do a solid breakfast with some great home-fries and typical diner burgers.

The place has been around since the late-1940s and seems to be going as strong as ever, stuck though it is in time. A Saturday morning visit will likely find Jimmy’s packed with a dishevelled and shaggy breakfast crowd.

Cutlery and dishes are mismatched, the latter likely Pyrex or Corelle Living Ware to mismatch the battered chrome and formica. Recently re-covered banquettes contrast with the kitsch and the junk from several eras: an old 1800s horse poster, 1960s cartoon and metal survivalist signs that you’d better behave yourself because “there’s a gun on the premises on three nights of the week: you just have to guess which three.” You can get keys cut here too. 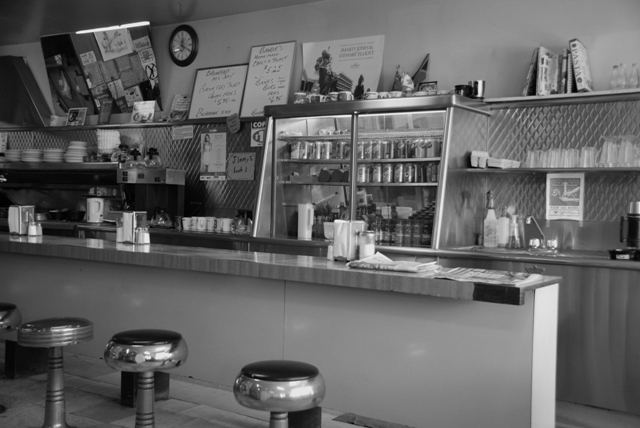 The cooking gear, trowels and spatulas behind the counter are well-seasoned and construction grade. Pots lids have done a half-century of steam-duty on the flat top. ( Check out the wonderful photographic essay of Jimmy’s by photog Ian Willms)

The “Banks Burger,” named for the cook who used to make them, is a now frozen burger on a commercial corn meal-dusted bun with the usual condiments – with the exception of smokey bacon made by a local Waterloo Region company and sliced by hand in the diner.

The Jimmy’s burger-experience is to engage with history, to commune with a diner era that saw GIs return home after the cataclysm of war and watch the shoe-banging tensions of the Cold War unfold. It was communism versus capitalism and complaining about the “Government” (as usual). It was Sputnik and Elvis. It was the Avro Arrow. It was betting on the ponies. It was technology and good ol’ American culture broadcasting brashly around the world on a thing called a television.

And I’ll bet that Jimmy’s was unmoved by all of it.

SUBSCRIBE TO GET YOUR FREE SPICE BOX EBOOK
You are subscribing to the FBC Food Lovers Newsletter.
You can unsubscribe any time!
Click Me
3shares

I’ve tried many of the new burger bars that do the build your custom burger that have become the in thing the last couple of years. Though with that said I’d probably say my favourite place to grab a burger is probably still Johnny Fresco’s. Their burgers are excellent and the fries and gravy are probably the best in the region.

I find Little Louie’s I love the inventiveness. While I have certainly had misses there, I love the fact their burgers of the week are culinary experiments. This appeals to me as a cook, as I always love trying new things out instead of playing it safe all the time.

Have you tried the lamb burger at Fresco’s?

I really have to disagree with the review of Fratburger.
If you take the burger patty as a stand alone piece of meat it is completely tasteless.
They rely on their sauces to make the burger rather than enhance the patty.