In our continuing Canada's Tastemakers series we profile people who are making an impact on Canada's food scene,  from authors to producers to chefs and more. Today Tiffany Mayer shares the story of Rob Firing, Canada's first cookbook agent, author of  Steak Revolution and student of the relationship between humans and cows.

They say in publishing it’s all about who you know.

In Rob Firing’s case, getting to know Canada’s Food Laureate, Anita Stewart, 20 years ago set the literary agent on a path to becoming the country’s pre-eminent steak scribe.

Firing was Stewart’s promoter and publicist at the time. He was also an eager student, eating up everything the expert on Canadian cuisine espoused about the foods of our Home and Native Land.

“It really opened my eyes to what local food was,” said Firing, who works for Transatlantic Agency. “I investigated the heck out of everything. I took to that really readily. Life since then has been a marriage of food and books.”

Last month, that union bore Steak Revolution, Firing’s first solo cookbook about one of nearly every omnivore’s most prized “indulgences, rewards, and celebrations.” It’s as much a field guide about sourcing and cooking steak as it is a collection of recipes that celebrates the lesser-known cuts of the cow — an animal Firing seems to adore as much as his tuxedo cat Ponty.

More than a love letter to one of his favourite foods, however, Steak Revolution calibrates the misconceptions about a farm animal that desperately needs the help of a PR pro like Firing in this era of Meatless Mondays.

“Steak is special and it is something of a celebration. You tend to eat it at the end of the week a lot and it can be expensive,” he explained. “All the more reason to know more about it and treat it with respect.”

Firing really started to sink his teeth into the topic as an early twenty-something working at The Keg in Toronto’s Yonge-Eglinton neighbourhood.

At the time, the steakhouse chain was transitioning from using sub-primal cuts butchered on site to grilling pre-cut steaks. He learned a lot about cooking steak — well-done isn’t even acknowledged in the section of Steak Revolution about the perfect stages of doneness. Firing also discovered he loved eating the beefy cuts, especially an untrimmed, bone-in ribeye cooked over a live fire.

Still, it wasn’t obvious he’d go on to pen a such a meaty volume, even after working with Stewart. Firing was busy establishing himself as Canada’s first cookbook agent. Both with his own company and for 15 years at Harper Collins, he represented some of the biggest names in the food world. Jamie Oliver, Anthony Bourdain, Laura Calder, Jamie Kennedy and Ricardo L’Arrivee have all had Firing championing their work.

He’s also worked closely with J. K. Rowling, the late Tom Wolfe, and Margaret Trudeau. And on the morning he and I chatted at a Kensington Market coffee shop, he kept a close eye on the clock for a 1 p.m. appointment with Joanne Lipman, former USA Today editor-in-chief and author of That’s What She Said: What Men Need to Know (and Women Need to Tell Them) About Working Together.

But through it all, there’s been steak to celebrate the end of those storied work weeks. First, though, there were some eye-opening visits to the butcher shop, including the serendipitous one where the proverbial light went on and the idea to write Steak Revolution came to Firing.

Some time had passed since the release of his first cookbook, The Everyday Squash Cook: The Most Affordable and Versatile Superfood, co-authored with Ivy and Kerry Knight. Research and experience also told him that single-subject cookbooks sell well.

“I was wondering what my next book might be,” Firing recalled. “The shine had come off the squash book as it had been a couple of years … and it was so obvious I could do [steak].”

RELATED:  Canada's Chefs: Sousanh Chanthalangsy of Yellowknife's One of a Thai

That’s because he had spent the past decade being “steak-educated” by butcher shops, particularly Sanagan’s Meat Locker in Kensington Market, whose owner, Peter Sanagan, wrote the foreword in Steak Revolution.

One of the most important lessons learned: “Like many other kinds of food, steak has terroir,” Firing said.

So he travelled the world to sample that hard-to-describe taste of place in steak produced elsewhere. He discovered the best steak in the world is txuleta from the Basque Country of northern Spain. He nearly fainted the first time he ate one. 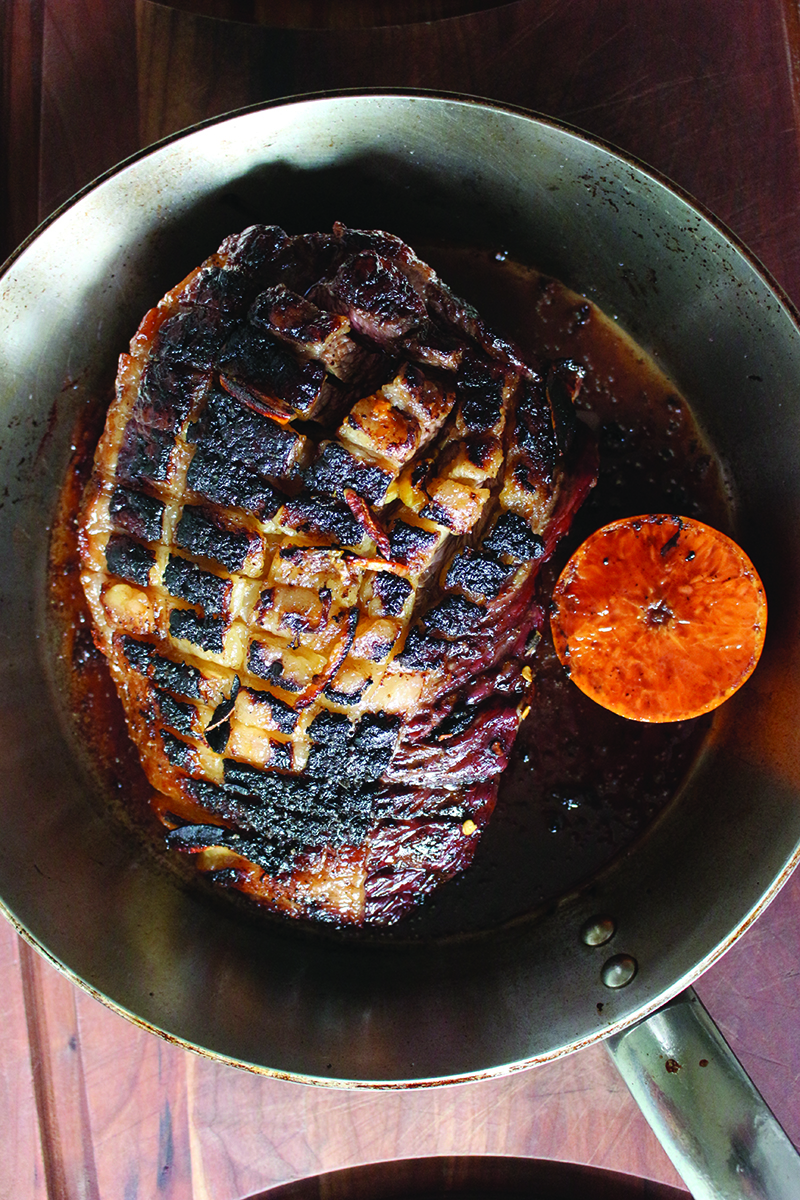 Firing learned those Spanish cows are massive beasts that can live up to 18 years, grazing the grasslands of the region and developing yellow fat that’s packed with carotenoids, which our bodies convert to much-needed vitamin A.

In North America, beef cattle are slaughtered at 18 months, and are raised using different methods, all of which he discusses in his book.

From there, Firing delved into the history cow, which was first domesticated in Iran 10,500 years ago. He studied the relationship between the bovine and human, and learned about vegetation dynamics. Then he boned up on the work of other writers, including Nicolette Hahn Niman, an environmental activist, vegetarian and cattle rancher, who makes the case for sustainable beef production — three words that some environmentalists have long argued don’t belong together.

“When someone starts researching something, facts stick to them more than other people,” Firing said. “There’s a lot to know and I certainly don’t know everything.”

Still, what he does know, he’s happy to share in a way that’s not preachy but enlightening and empowering. His hope is to “get more people to shun styrofoam trays and go to the butcher counter in the grocery store or the butcher shop and see what they can offer.

“(The styrofoam tray) leads to people thinking about meat as a commodity,” he explained.

It took Firing two years, one food photography course, and a lot bavette, hanger steak and tri-tip to write Steak Revolution. He chose to focus on a dozen different “butcher’s cuts” to get people thinking about the entire animal, and to show them lesser-known cuts can outshine the common striploin or filet.

Firing also tapped into the different cuisines of the world to come up with his recipes, including a sizeable chapter on sides with vegetables well represented.

“Almost every different cuisine in the world has different kinds of steak and ways to prepare it,” he said. 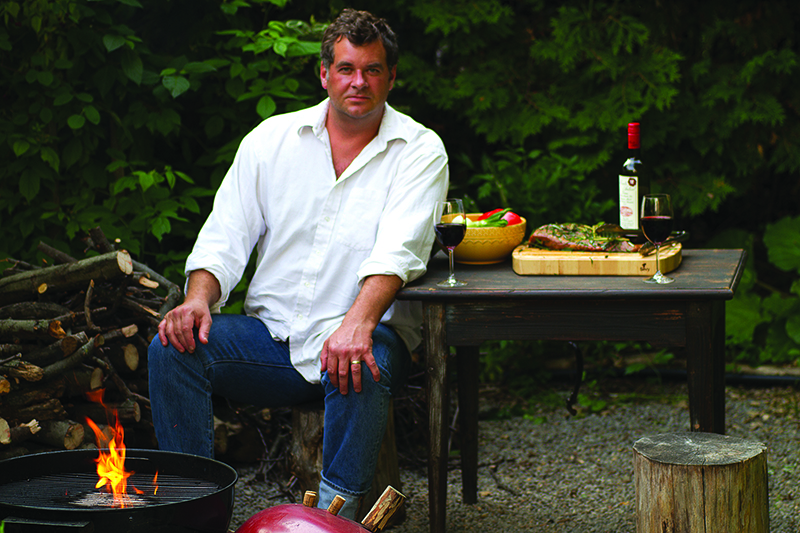 His neighbours were his taste testers — Firing’s wife is vegetarian — and though Steak Revolution has now found its place on bookstore shelves among the names he’s represented, there’s still always one of those sub-primal cuts in his fridge. And in them, the muse for his next book, which won’t be a cookbook but will still honour the cow.

“I really love cows,” Firing said. “As I creep toward some distant retirement, I do want to do more of what I want to do, and food is it, and the issues around it.”