Do you feel like you just don't have time to make a satisfying weeknight dinner? The answer to your dilemma is as close as that  slow cooker gathering dust in the back of a cupboard. As Tiffany Mayer discovered when sitting down with Ricardo, there's a slow cooker renaissance happening, and it offers something for everyone! 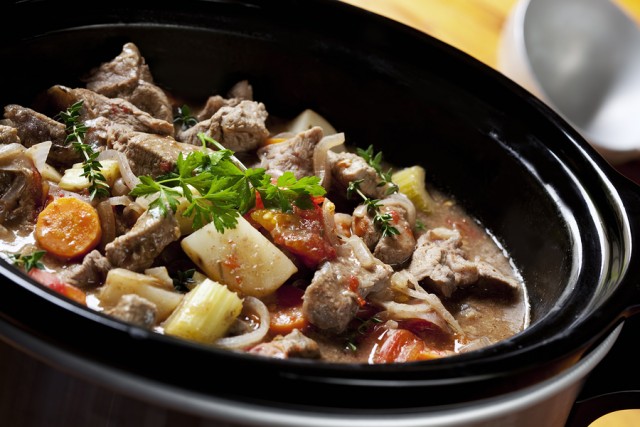 There was a time when Ricardo Larrivée was skeptical of the slow cooker. It seemed dowdy; a kitchen gadget bound to be a dust collector.

But at his wife Brigitte’s behest, Ricardo started cooking with one and the slow cooker eventually worked its way up the ranks to become an invaluable tool in his busy home. It also became the subject of two cookbooks penned by the TV star and food writer.

“I started to ask people what their problem was in the house at night,” he said. “It was eating healthy but not really making the effort. The second thing was time and price and I thought maybe this was the answer to these things.”

It was for FBC member Kelly Kwok. The founder of Life Made Sweeter didn’t grow up with a slow cooker in her house. It wasn’t until she got one for Christmas after she was married that she started playing with it, turning out the odd soup or stew during the week to ensure a meal on the table after a long day at the office.

After having children, Kelly relied on her slow cooker even more to make her favourite meals while she tackled parenting and laundry.

This fall she released her first cookbook, The Asian Slow Cooker: Exotic Favorites for Your Crockpot, to spread the word. It joins Larrivée’s newest homage, Slower is Better: From Taco Fiesta to Chocolate Pudding Cake, on shelves and in kitchens.

Theirs aren’t the only titles dedicated to an apparatus that takes care of dinner while we take care of everything else. Best of Bridge’s The Family Slow Cooker is also out this fall to convince us to pull our slow cookers from the depths of our kitchen cupboards and create satisfying, inexpensive meals.

And rumour has it, Martha — yes, that Martha — is working on a slow cooker cookbook, too. It all adds up to one thing: a bona fide comeback of the contraption created to make supper a cinch.

Slow Cooking to Stretch a Dollar

Say slow cooker and, chances are, many think of murky, mushy stews and chilis. It can happen if something gets left on the warm setting too long.

Slow-cooked meals are more like magic for our taste buds and wallets when done right, though. Meals seem to multiply in those oval vessels. Slow-cooking usually means leftovers, and that means lunches for the week. Freeze your favourite stew recipe instead and you have something to eat the next time you’re too busy to lend a thought to cooking dinner.

Most slow cooker recipes can easily be doubled, too, making batch cooking a breeze. Your favourite takeout joint is likely the only one to be disappointed by your stockpile of ready-made meals.

Crock pots also lend themselves to turning cheaper cuts of meat into decadent eats. Ricardo nails it when he says slower is better, particularly with cuts like pork shoulders and beef shins. Slow heat makes otherwise tough, underrated bits tender. It also make them more flavourful, given all the time for ingredients to mingle and mellow together.

No vegetarian is left behind in this latest slow cooker revival, either. Slow-cook batches of beans  on a Sunday afternoon to have on hand for favourite recipes during the week. It’s a healthy, cheaper alternative to sodium-soaked, canned versions.

Ricardo spills the beans on slow-cooking legumes in his book. Spoiler alert: boil for 10 minutes in unsalted water first to get rid of natural toxins that are hard to digest before transferring to your slow cooker.

It’s a beautiful thing walking into a home filled with the aromas of dinner. It does require some planning, however, and that forethought is often why slow cookers rarely make an appearance in some kitchens.

Ricardo polled Canadians and discovered nearly two-thirds of us don’t think about what we’re having for dinner until 4 p.m. that afternoon. That doesn’t bode well for the slow cooker, but it can if we rethink meal prep.

When stopping at the grocery store on the way home from work to get the fixings for tonight’s feast, pick up what you’ll need for tomorrow’s, too, he suggested.

After dinner and before all the dishes are done, start preparing for the next day. Chop, dice, sauté, roast and assemble everything in your slow cooker, put it in the fridge, then pull it out and plug it in the next morning.

Supper prep can also be done before breakfast for simpler recipes that don’t require extra steps between chopping board and crock pot.

In a sense, it’s like making Sunday dinner mid-week but without all the work. “Long simmering stews or braised meat, how are you going to do that on a Wednesday? It’s impossible,” Ricardo said. “So if you want to vary the food experience you have in a week, [a slow cooker] is great.”

Ricardo has plenty of stories of gathering friends around a slow cooker or six. They’re brilliant for potlucks, which he writes about in a chapter of his book dedicated to hosting an Indian feast.

Family meals, big and small, also become less of a fight because slow cooker dinners offer variety while doing away with formality.

Take, for example, Ricardo's idea for a family taco party. Cook favourite fillings in the slow cooker, set out bowlfuls of fresh sides and let everyone serve themselves without any arguments from those who want bean tacos over beef.

For special occasions, like Thanksgiving or Christmas dinner, the slow cooker can be a trusty sidekick to the stovetop or oven. It can cook veggie sides, particularly those that need to be done at different temperatures than the items occupying prime real estate in your oven. Potatoes, squash and tomatoes are all perfect candidates to hang out in a slow cooker while you focus on everything else.

That said, don’t fear doing a roast, chicken or holiday turkey in the slow cooker. Ricardo assured it can handle such a big job, too.

“See the slow cooker as a tool, like your stove, like a steam oven,” he advised. “It’s just a tool. You can use it to cook things for a very long time but you can use it also to steam a piece of salmon.”

Slow Cooker Renaissance: Meet the Comeback Kitchen Tool was written by Tiffany Mayer, a freelance journalist and author of Niagara Food: A Flavourful History of the Peninsula’s Bounty (History Press, 2014). She blogs about food and farming at eatingniagara.com. You can also listen to her newly launched food podcast, Grub.

SUBSCRIBE TO GET YOUR FREE SPICE BOX EBOOK
You are subscribing to the FBC Food Lovers Newsletter.
You can unsubscribe any time!
Click Me
121shares