Canada’s Tastemakers: Dean Kreutzer of Over the Hill Orchards and Winery

In our continuing Canada's Tastemakers series we profile people who are making an impact on Canada's food scene,  from authors to producers to chefs and more. Today Tiffany Mayer shares the story of Dean Kreutzer of Over the Hill Orchards and Winery in Lumsden, Saskatchewan, whose passion is breeding fruit trees and other fruits that can withstand Prairie conditions. 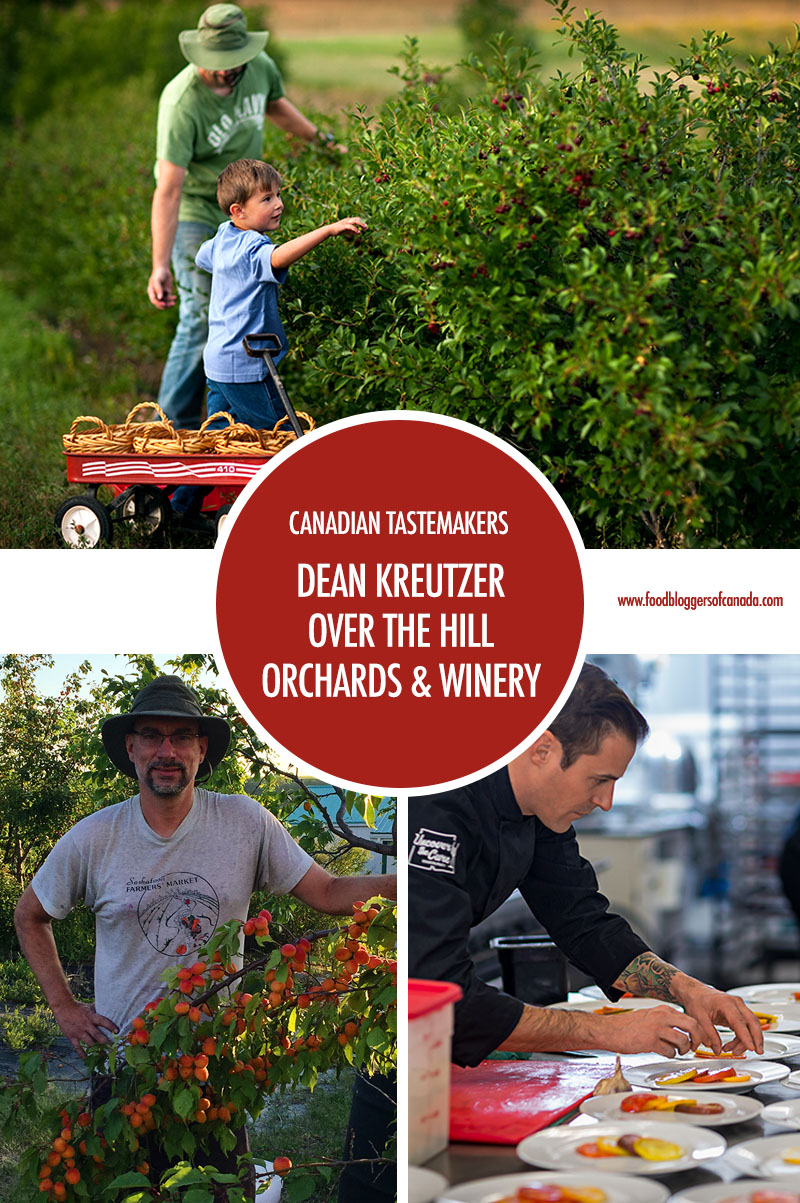 Niagara and the Okanagan Valley are in the throes of another peach season. Fuzzy fruit abounds at local farm stands, and farm workers can't seem to pick fast enough to relieve branches sagging from the weight of this year's crop.

Dean Kreutzer doesn't need a peach harvest of such mythological proportions to be a happy farmer. The Lumsden, Saskatchewan man is thrilled to get just a couple hundred pounds from his trees taking root on his property half an hour outside of Regina in the postcard-worthy Qu'Appelle Valley.

But while peaches are proving challenging to grow on the Canadian Prairies, other fruits aren't — and no, we're not talking about the Saskatoon berry ubiquitous in these parts.

Kreutzer, who owns Over the Hill Orchards and Winery with his wife Sylvia, is proving Saskatchewan is a Canadian fruit belt in its own right, able to produce cherries, plums, pears, haskap, apricots, apples, grapes, and one day, perhaps, peaches.

"It's like trying to have citrus in Southern Ontario. That's what we're trying to do here — make a hardy peach or a hardy almond," Kreutzer said. "If you could grow lemons or oranges outside there, that's like what we're doing here."

The couple are making inroads with stone fruit in Canada's bread basket, though. While Kreutzer has to grow his peaches in pots so he can move them indoors once those unbearable (for a peach) Prairie winters take hold, he grows apples, grapes, plums and cherries in the ground with surprising success.

Prairie cherries, a sour variety developed at the University of Saskatchewan, have proven prolific producers. Bushes can turn out bumper crops pushing 70 pounds. And if left on the tree long enough, a Prairie cherry can trump a Niagara Montmorency in flavour.

In 2000, Kreutzer found himself sampling his first Prairie cherry at the University of Saskatchewan. Next, he was on road trips to the Okanagan, Niagara, and Fresno, California, to bend the ears of growers and learn about fruit breeding and the delicate art of pollinating by hand. Then he was off to Minnesota and Wisconsin to glean the intricacies of growing tender fruit in harsh climates.

Kreutzer returned to the Land of Living Skies to establish one of the province's first Prairie cherry orchards. Today, the Prairie cherry has become nearly as common a sight in these parts as a sheaf of wheat or canola flower thanks to the couple steadfastly pushing the revelatory concept of growing the stone fruit in central Canada.

It's impossible to go to a craft show without finding a vendor — or several — staking their livelihoods or serious side hustles on selling local, small-batch Prairie cherry jam.

"There's a lot of orchards in the Prairies now whereas before it was just Saskatoon berries," Kreutzer said. "There's almost too much now. We had to evolve."

Enter apricots, apples, grapes and haskap, and Kreutzer's attempts to breed and commercialize those fruits that aren't exactly synonymous with Saskatchewan. It's not quite blazing a trail to become Canada's next fruit belt, but the Prairie landscape could change, if ever so slightly, because of Kreutzer's efforts.

"If I look back in life, I'd like to have a legacy. If people can look in their backyard and have wine grapes or almonds growing there, that's a pretty good legacy," he said.

Especially for a guy who was more likely to make his mark producing computer software when he tasted that first Prairie cherry in a test orchard so many years ago.

Eighteen years ago, Kreutzer was toiling away as a computer programmer in Regina when he walked into a local garden centre looking for flowers and laid his eyes on fruit trees that weren't those omnipresent Saskatoons.

They were hardy varieties of apricots, pears and plums, and they planted the seeds of an epiphany for a guy with no agricultural background. Kreutzer made room for everything he could in his urban backyard.

"I don't know what attracted me to do that. I didn't have land. I only had a backyard."

A few years later, that backyard became 40 acres in Lumsden, a bedroom community of the Queen City. Kreutzer's "mind exploded with opportunity."

There was room for more trees, sure, but it was where a new career would take root as a tree fruit breeder and, to sustain that passion, as a fruit winery operator.

"It's not for money. Computer programmers make a lot of money. If I didn't have to make money, I'd do just fruit breeding," Kreutzer said. "The winery pays for all the stuff I want to do." 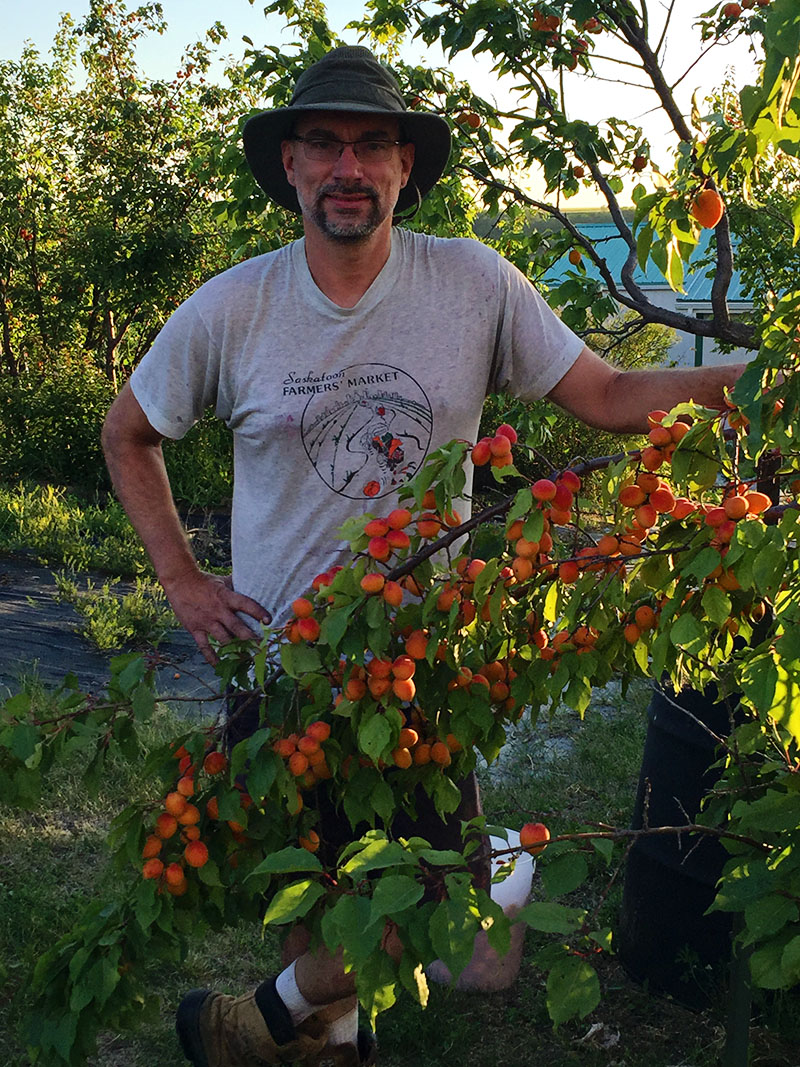 He learned quickly that apricots could turn out beautiful blossoms, but the early bloomers were vulnerable to Saskatchewan's late frosts. They looked stunning but getting fruit was a three-year event, if Kreutzer was lucky. The fruit was also half the size of a typical Niagara version.

He brought in hardier varieties of apricots from other parts of the world, including Russia and closer to home from a tree fruit bank in Harrow, Ontario. Kreutzer painstakingly took pollen from one and placed it on the stigmas of flowers on another tree. The hope was to ultimately create an apricot that would bloom later and provide more reliable crops.

This year, 12 years after he pollinated his first trees, Kreutzer has four apricot varieties he's releasing for sale to the public, though he still can't guarantee they'll fruit every year.

"It takes a long time." Kreutzer said. "My babies are the apricots. They're the ones I started with. It's difficult to improve on them, which makes it a challenge and people are surprised we grow them."

Kreutzer also has wine grapes in the works. He predicts he's four years away from having something viable to grow on Canada's flatlands or in outlying areas of emerging wine regions, such as Quebec. It will be about eight years before he has a seedless table grape ready for people to plant in their backyards.

"There's definite advantages to growing grapes in Saskatchewan than down East where you have lots of humidity and disease you have to spray for," he said. "Not only could this open up areas in Saskatchewan and the Prairies but it could open up spots elsewhere in Ontario and Quebec, or elsewhere in the world that are not so great for grape growing."

Kreutzer tests made-for-the-Prairies apple varieties developed at U of S, too. They come with names like Prairie Sensation and boast a long shelf-life and flavour that's "world-class."

"If we were doing this full time, we'd probably have this done but we have a winery to run."

It's a winery that grows certified organic fruit and turns it into tipple, including a flagship sour cherry. It's one of 11 wines Over the Hill produces. The lineup also includes Pinot Noir, Chardonnay and Gewürztraminer made with grapes Kreutzer grows himself and pads out with fruit from the Okanagan Valley.

He and Sylvia also call on local chefs to cook weekly dinners at the winery throughout the summer. Food is paired with Over the Hill vintages, and some courses include Kreutzer's tree fruit.

"People are just out-of-their-minds thrilled with the quality of food and the surroundings. That's our focus, to create a cool experience for our customers," Kreutzer said.

And to see more orchards — though maybe not peach — and vineyards in places we'd least expect them.

"I can't really say why I was attracted to growing fruit. I guess it was the challenge," Kreutzer said. "My personality, I need to do something unique and different. Maybe it's an ego thing. I like to break ground. I'm not curing cancer but I like the idea of doing something meaningful."