In our continuing Canada's Tastemakers series, we profile people who are making an impact on Canada's food scene,  from authors to producers to chefs and more. Today Tiffany Mayer talks to Christian Elsing about his job as tea sommelier at Victoria's Fairmont Empress Hotel.

Christian Elsing doesn’t reach for a neon-hued sports drink after going hard on his bike or during a workout.

Instead he drinks tea. Mint tea, to be exact, with orange juice, lemon juice, a pinch of salt and lots of ice. But the key is the tea “for the flavour.”

If someone wants to feel like the Duchess of Sussex, Meghan Markle, Elsing has a tea for that: a minty green brew with strong licorice notes, the way Markle is said to enjoy a spot.

Feeling festive? Elsing has a tea for that, too. Two, in fact: a marzipan rooibos and a Grand Bazaar spice made warm and spirited like the holidays with Turkish spices.

As the resident tea sommelier and lobby lounge manager at Victoria’s Fairmont Empress Hotel, Elsing has an aromatic beverage for just about any palate, food pairing, or mood that strikes come high tea time at one of Canada’s oldest and most stately inns.

“We have so many beautiful teas here. There’s so much involved with all these teas and that’s why people come here,” Elsing said.

What Is A Tea Sommelier?

So what exactly is a tea sommelier anyway? Elsing’s job isn’t much different than his counterparts' in the wine world. He has to know the finer points of the teas and tisanes he steeps and pours: the differences between green, black and white (they’re all from the same plant); where the leaves and herbs are grown; how the elevation of a plantation might affect their flavour; and how and when tea leaves are harvested.

It’s knowledge that would undoubtedly make him a ringer on a trivia team. More importantly, though, it enhances his guests’ experience at the Empress with information about a topic few understand despite tea being the most widely consumed beverage in the world after water.

“If you sit down and just drink tea, you may enjoy it, you may not. But if you know what you’re drinking, you will enjoy it more,” Elsing explained. “Bringing [people] a passion for tea is amazing and it’s a fascinating world.”

Take the Empress’s Madame Butterfly Jasmine, one of Elsing’s favourites of the 21 teas he serves. It’s green tea layered five times with jasmine to infuse the leaves with a delicate perfume before being rolled and knotted by hand. Or the Rose Congou Emperor, which is produced in a similar way to impart the floral essence that Princess Diana reportedly loved in a cup of tea.

Elsing can talk a blue streak about Blue Suede Shoes, a green tea made indigo with pea flowers like those used in the Empress’s exclusive 1908 Gin.

And the story behind that Meghan Markle brew? Elsing created it himself using ingredients from The Metropolitan Tea Company in Toronto, which supplies all the Empress’s leaves. It’s also where Elsing trained to become a Level 1 tea sommelier and is working toward Level 2 certification.

“The variation of tastes created is so much greater than wine. It’s handy work,” he said.

It’s not necessarily the kind of work you’d expect of a card-carrying member of Team Hot Chocolate, however. Growing up, the German-born Elsing didn’t care much for what became his life’s work when he moved to Victoria seven years ago.

“The main reason is whenever I tried tea, it was never a very good tea. People buying tea would go to the supermarket, and having tea, there was nothing fascinating about it,” he recalled. “Until you try the good teas of the world, you’ll see it in a completely different light. [It] blows your palate away. There are few things you can eat or drink that have that many variations.”

You’ll still find a container of hot chocolate in his pantry today amongst all the tea he keeps on hand. You’re less likely to find coffee, however, unless he needs a “smack in the face” to wake up, and only then he’ll drink the freshly ground and brewed java at the hotel.

His energy, at least on the job that he's had for the past two and half years, comes from a love for what he does, which is overseeing afternoon tea at the Empress for as many as 450 people a day.

“It’s a privilege and a pleasure. It just drives you through the day. You just go, go, go.”

That’s not to say high tea is a hurried affair. Elsing and his team of tea servers, some who’ve worked at the hotel for nearly 50 years, ensure a leisurely experience for those partaking in a tradition as old as the 110-year-old storied Empress hotel.

They guide guests through the process of high tea, from presenting the blends in a sensory menu, which allows people to see and smell them, to ensuring the correct steeping time — usually three to five minutes.

They’ll advise on the best way to enjoy a particular tea, too. Milk, sugar, and honey from the Empress’s own hives are fine additions to black tea. A little milk, for example, can go a long way to suppress the tannins in that cup of Assam.

“The only thing you don’t want to add anything to is green tea and fruit teas. They just don’t taste right,” Elsing advised.

Still, there’s no judgment if anyone does take their White Monkey Paw milky.

“It doesn’t matter what we say,” Elsing said. “In the end, it’s your taste that counts. It’s always your personal taste. That’s the main thing.” 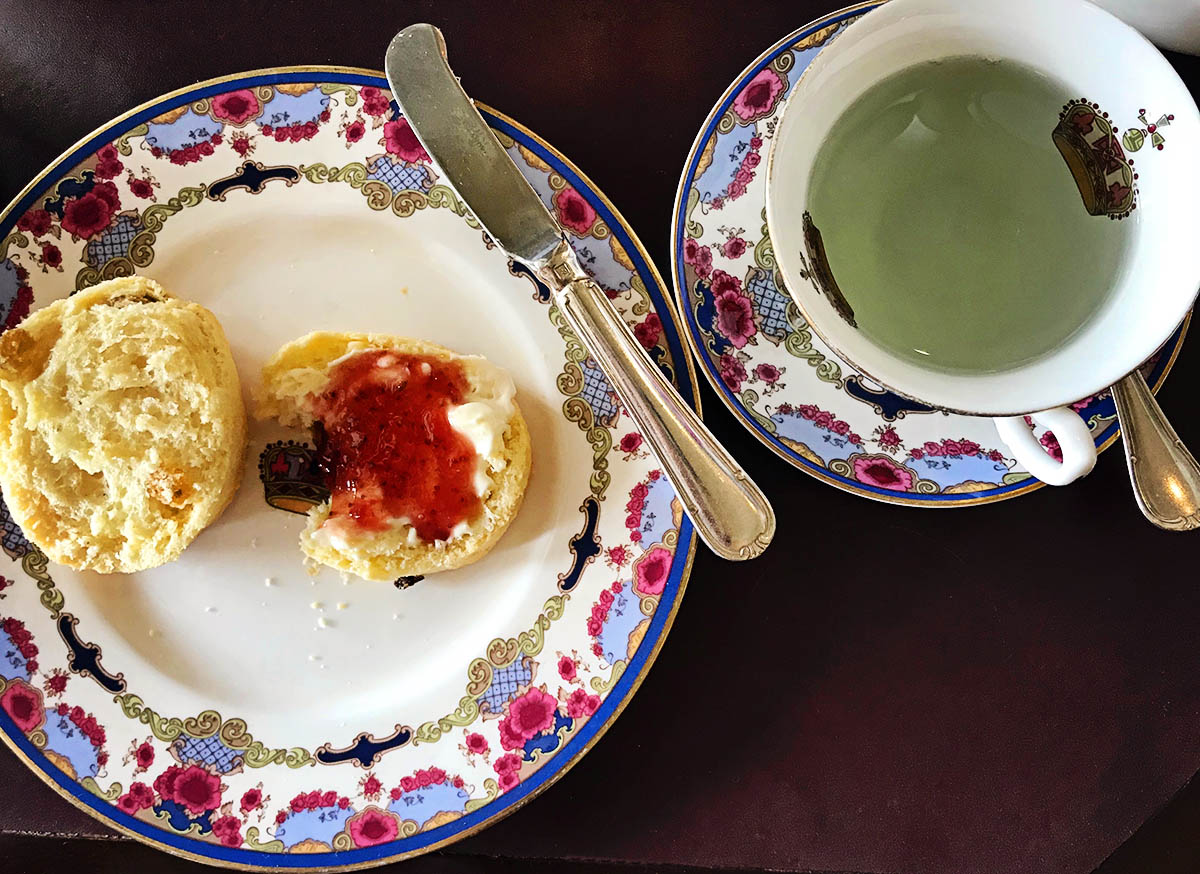 One rule Elsing is keen to enforce is having guests eat their scones first instead of their tea sandwiches. They’re at their peak, warm out of the oven, when they arrive at the table with house-made clotted cream. There are few, if any, protests from guests about having dessert first, Elsing noted.

“(Afternoon tea) is a celebration, a bit of a process,” he said. “Just enjoy everything.”

What do the tea leaves say?

All tea is from the same leaf of the same plant called Camellia sinensis, Elsing explained. The different colours and intensities depend on whether a leaf is steamed, baked or oxidized.

Green tea is made from leaves that are steamed and dried soon after harvest. Black tea is oxidized. Oolong tea is partially oxidized and creates something that tastes like a mix of black and green teas. Lapsang souchong is smoked and the most polarizing of all the teas served at the Empress.

“People either go bananas for it or they don’t,” Elsing said.

No matter what you drink, steep to taste, at least three to five minutes, tasting the tea after three minutes to determine its readiness.