In our continuing Canada's Tastemakers series we profile people who are making an impact on Canada's food scene,  from authors to producers to chefs and more. Today Tiffany Mayer shares the story behind the creation of Tofino, BC's Wickaninnish Inn's eponymous cookbook that's an ode to local ingredients and storm watching season.

There are two items critical to surviving the wrath of the Pacific Ocean during storm season.

One is Gore-Tex. The other is a bowl of chowder.

Warren Barr, executive chef of The Pointe restaurant at Tofino’s Wickaninnish Inn, can attest to the necessity of both. As the man helming the kitchen at what’s become a beacon for weather watchers, Barr can set you up with the most important of the two survival essentials.

After all, you can watch the Pacific thrash about under ominous skies Gore-Tex-free from the safety of The Pointe with its floor-to-ceiling, 240-degree panorama of Chesterman Beach — while eating bowls of Barr’s corn and clam chowder, of course.

“It’s amazing,” Barr said of the storms that, combined, can drop up to 2,500 millilitres of rain between November and March on Vancouver Island’s west coast. “It’s awe-inspiring by the very definition of the word … seeing one of those storms come through.”

Equally jaw-dropping is the landmark Relais & Chateaux hotel’s latest claim to fame. The Wickaninnish Cookbook: Rustic Elegance on Nature’s Edge was released last month. It’s filled with sturdy, glossy pages that tell the story of a place that turned Mother Nature’s fury into a tourist attraction, and made pragmatic, stick-to-your-ribs chowder a thing of elegance.

To ensure storm watchers elsewhere in the world are covered, the cookbook offers four chowder recipes, including Barr’s satisfying version that’s a formidable shield against any tempest when paired with homemade bread and butter, and beer. 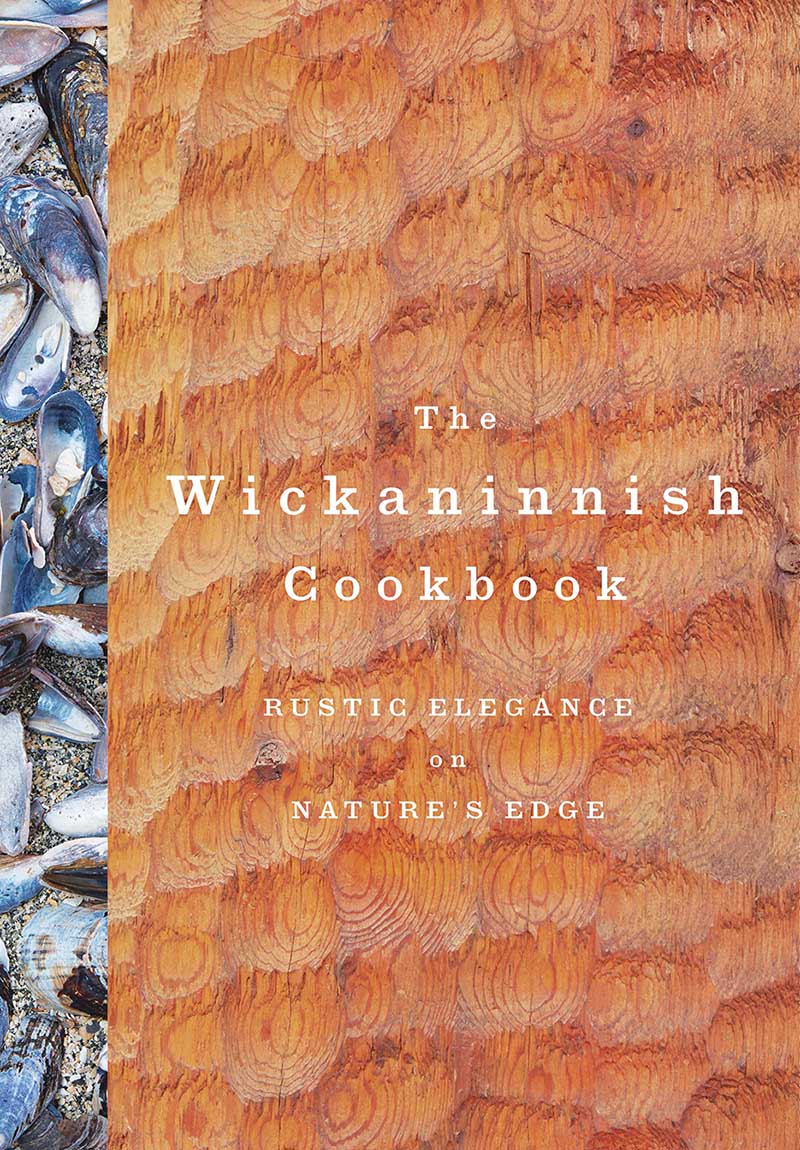 But there are more than 100 other recipes, gathered from every chef who’s stood behind the burner at “The Wick’s” crown jewel Pointe restaurant since it opened in 1996. Together, they take readers "from breakfast to dinner, and from storm watching to beach picnics.”

The real intention of the cookbook, however, is to mark the 20th anniversary of the inn, founded by Tofino native — and Mother Nature’s best PR rep — Charles McDiarmid. It was a last-minute idea during the 2016 milestone that Barr recalled being easier said than done.

A party was planned for October that year with many of The Wick’s regular and return guests invited to attend. “The idea started floating from some ambitious person,” Barr explained.

The hope was to have something written and published in time for the party. It had to include recipes dedicated to The Wick’s ingredient-driven philosophy. They’re favourites going back to opening chef Rod Butters, who helped The Wick earn the world-renowned Relais & Chateaux designation, and from each of his successors who maintained it by making everything — even the butter — from scratch.

“But it was hard to corral that many chefs,” Barr said.

Then there was the photography — lick-the-page food shots and devastatingly beautiful landscapes — required to complement engrossing words. What was supposed to be a quick project turned into an effort that took two and a half years.

The end result was more an homage to Tofino, once a remote community accessible only by boat, floatplane or airplane, than a cookbook, Barr noted.

“It was a great way to celebrate the 20th anniversary, even it it was a bit late,” he said with a laugh.

Still, it was “surprisingly easy” to convince The Wick’s past chefs to get involved. Many, like Butters, came young and hungry, “on the edge of things” in their career, and used the Inn as a launch to other prestigious posts.

Each one had to be keen to work with the most hyperlocal ingredients, like hemlock tips and cynamoka berries. And they had to do it at the calibre demanded by Relais & Chateaux to ensure The Wick’s continued membership in the global association of luxury hotels and restaurants.

RELATED:  Where to Eat This Weekend in Tofino, BC

All have since gone on to open their own restaurants or lead storied kitchens elsewhere:

The recipes all have their time and place in The Wick’s history, with each chef choosing their favourites to include. But rather than be a chef-y book bound to become a coffee table tome, The Wickaninnish Inn is deliberately geared to the home cook, including those far from Canada’s westernmost edge.

“We would definitely like them to have fun cooking. Some are easy recipes and some are aspirational,” Barr said.

Only one is impossible, save for those who call Tofino home. Barr’s elk with forest flavours requires hemlock tips to season salt and oil, local mushrooms, those cynamoka berries, also known as evergreen huckleberries, and elk, herds of which roam the island.

“I put it in there knowing absolutely no one would be able to cook it,” he said. Still, he did so hoping it would inspire people to cook with what’s available to them “to create something special to their region. Terroir gets used a lot, taste of place, but that’s what it’s meant to do.”

Most of the dishes in the cookbook are Barr’s “for nothing else because I was there” when the book came together. Wintry plates are also well-represented, a nod to The Wick’s place in storm watching culture.

“People come for the storms in November and get angry if it’s sunny,” Barr said.

He isn’t worried they’ll stop coming, sunny skies or foreboding, now that the secrets of this dining destination are out there to be consumed elsewhere.

Barr figures the book, with a cover that mimics the hand-hewn beams framing the panoramic windows at The Pointe, will beckon a new crop of storm watchers to head West and settle in for a bowl of chowder from his kitchen, Gore-Tex optional. 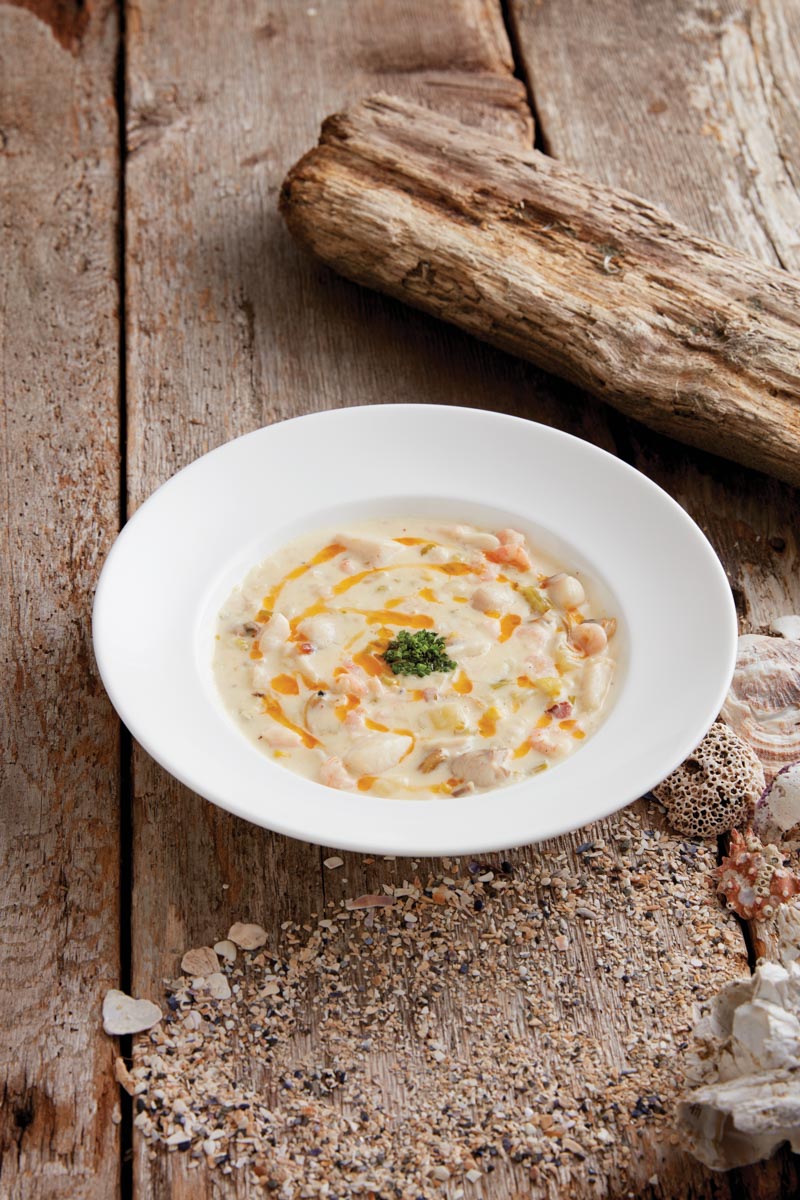