There are many dishes we associate with a particular culture that were actually invented or heavily adapted here in Canada.  In It's Canadian, Gabby Peyton shares the history behind some surprisingly Canadian foods. Today, Gabby explores the history of Hawaiian Pizza. Has there ever been a pie as hotly debated (and by world leaders, at that) as ham and pineapple pizza? 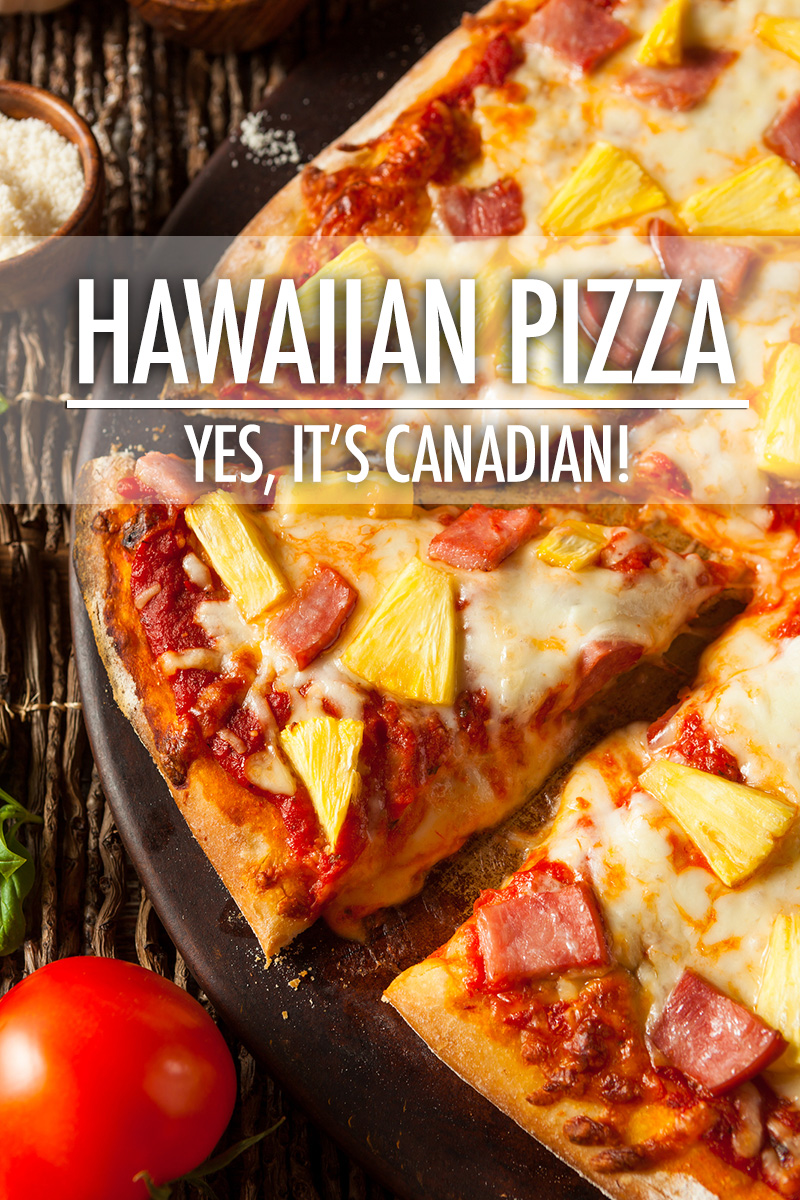 Pineapple on pizza: has there ever been a debate so heated over a pizza topping? Presidents have said they want to ban it, celebrities tweet their stances vigorously, and both varietals of Justin (Trudeau and Bieber) have weighed in on the subject, all without much consideration of how this dish came to be. It’s all about if you like pineapple on pizza and there’s no middle-ground with these opinions.

As far as iconic Canadian dishes go, Hawaiian Pizza is a new one. We’re not talking about generations of grandmas whipping up ham-and-pineapple pies: it was invented in a diner in Chatham, Ontario in 1962.

So how did Canadians end up with this odd combination in our culinary history? Like many dishes comprising Canadian culinary lore, Hawaiian Pizza began with an immigration, but its roots don’t go back to Italy.

Canada’s pizza presence was not solely founded by the Italian-Canadians who came across the Atlantic in the 19th and 20th centuries. From Olympia Pizza in Vancouver to Peter’s Pizza in St. John’s, many of the country’s pizza places are owned by Greek families who’ve been tossing pies for more than half a century.

It’s All Greek to Me

Chain migration (people from the same town moving to the same new city) was as common for Greeks as it was for Italians in the mid-20th century. Between 1946 and 1981, more than 100,000 Greek immigrants entered Canada and opened businesses like groceries, travel agencies and restaurants, which included many beloved local pizza places. In a 2017 interview with the Vancouver Sun about his family’s pizza shop, Olympia Pizza (which has been open since 1967), owner George Kerasiotis said opening up a pizza shop was just the thing to do at the time.

Greek-owned pizza shops sprung up from coast to coast. In Halifax, the inventor of the famous donair was Greek pizza shop owner Peter Gamoulakos. Even Boston Pizza, one of Canada’s biggest restaurants chains, was founded by Greek immigrant Gus Agioritis. This connection would have been more obvious had he gone with one of the other two names he was considering when opening Boston Pizza and Spaghetti House in Edmonton in 1964: Santorini or Parthenon.

See Pizza, Will Put Pineapple on It 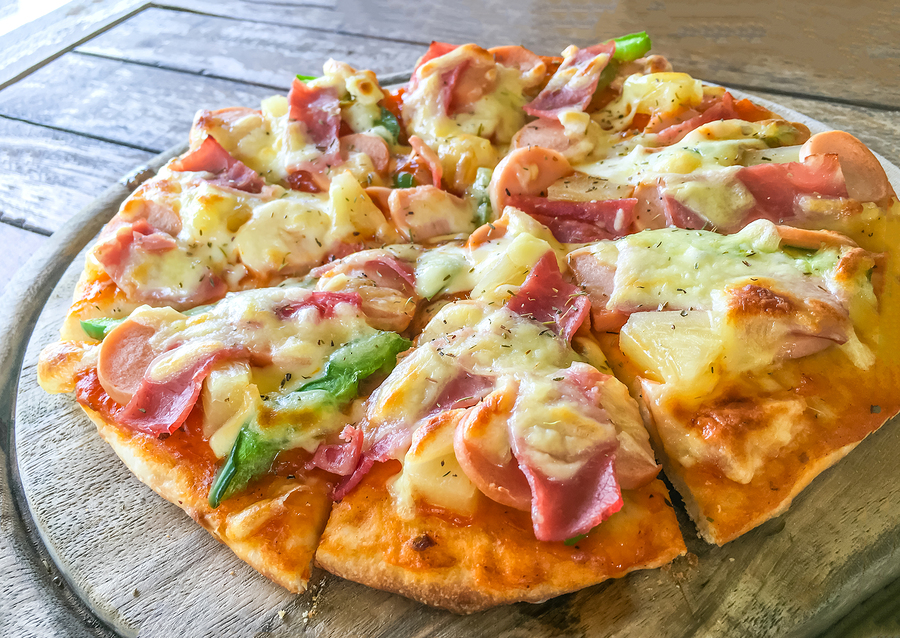 As you may have guessed, the inventor of Hawaiian Pizza was also born in Greece.

Twenty-year old Sam Panopoulos immigrated to Canada in 1954, and a lucky pit stop in Naples along the way had him taste pizza for the very first time. Panopoulos helped pizza make its way from Detroit to Windsor and then to Chatham, where he changed the way Canadians thought about pairing pineapple and ham forever.

Panopoulos opened up The Satellite Diner on King Street and served up the expected diner staples, but was also known for experimenting with new foods, and at one point even hired a Chinese cook to produce American-Chinese dishes.

Before the 1950s, few Canadians ate pizza or had even heard of the circular supper. In fact, Panopoulos said he had to go to Detroit to get a slice of 'za before he opened up his pizza shop. While one of the first pizza shops in Canada, Sam’s Pizzeria and Cantina, is said to have opened in Windsor in 1946 (ingeniously right next to the University of Windsor), the first pizza shop didn’t open in Toronto until 1957.

Because the public didn’t know much about pizza, you could get away with trying a lot of different combinations — no presidents were trying to ban putting some canned mushrooms on there (even though they maybe should have).

In 1962, Panopoulos says he decided to toss on some canned pineapple he had on the shelf along with some cubed ham, and Hawaiian Pizza was born. Tiki fever had come from Hawaii becoming a state in 1959 and it was no stranger to Canada, but he claims he called it Hawaiian because of the brand of canned fruit sitting on the shelf.

RELATED:  Iconic Canadian Food: The History of the Halifax Donair

The Future Is Fruity

Since its inception, Hawaiian Pizza has been controversial. Every time anyone in Canada has ordered pizza for a group, there's been serious debate whether to order a Hawaiian or not. In February 2017, Iceland’s President Guðni Th. Jóhannesson said pineapple should be banned from pizza, which sparked a social media firestorm. Everyone from celebrities to world leaders chimed in, which should keep the flames burning for many years to come. Panopoulos died in June of the same year, but not before he had a chance to defend his topping choices in a variety of radio and newspaper interviews.

Fruit on pizza isn’t necessarily a new thing, but it seems the future of pizza may see more of these sweet and savoury combinations. Pear, prosciutto and balsamic vinegar has become a classic combination for pizza, and there are dozens of recipes calling for roasted grapes on top of your favourite pie.

Blogger Cookie + Kate posted a recipe for a strawberry, basil and balsamic pizza in 2013, and How Sweet Eats posted strawberry pizza with caramelized onions and bacon last year.

One thing seems to be certain: while no one is merging the I-love-Hawaiian-Pizza and I-loathe-Hawaiian-Pizza camps, it has become part of Canada’s culinary history in a way no other dish has. From its inception by a Greek immigrant to the frozen-dinner aisle, it's definitely our most controversial iconic dish.

Pineapple on pizza? I think yes! Best thing ever thought of. Also I had no idea that pineapple pizza originated from Canada… Delicious!