The Spice Box — Getting To Know Cloves

Getting to Know Cloves is part of a monthly series here on FBC called The Spice Box. Primarily written by Michelle Peters-Jones, these articles create a spice primer for new and experienced home cooks alike! 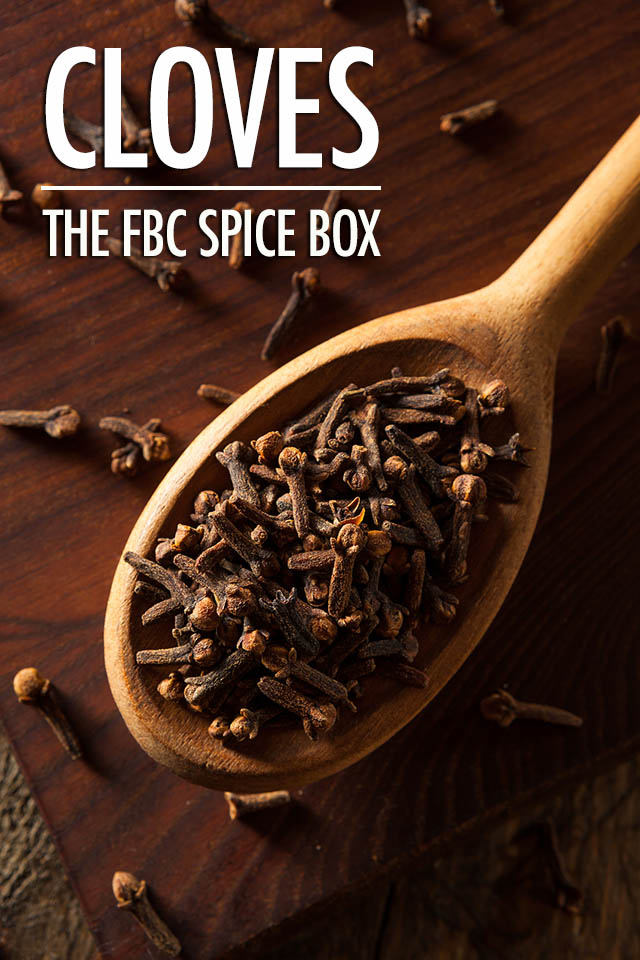 Did you know that cloves are actually unopened, pink flower buds that are dried? These little aromatic buds pack a powerful punch of flavour and are used in culinary traditions all over the world. Cloves are native to the Spice Islands (Maluku or Moluccas, the heart of the spice trade in Indonesia.) They are now cultivated in major tropical regions including Zanzibar, India, Sri Lanka, Madagascar and most recently in Brazil.

The history of cloves and clove production is a violent one, with the Dutch East India Company at the heart of monopolizing the clove trade in the world. Battles were fought to gain control of the spice trade from the Portuguese and later the English and French, and the clove trade, along with the scarcity of the spice, helped the Dutch gain an edge in the colonialism that took place in South-East Asia. Cloves were also the source of Dutch wealth for a long time.

Cloves are one of the most common and earliest known spices in the world. Cloves have a strong aroma, almost medicinal in their fragrance. The main source of this strong flavour is the powerful compound eugenol, which is the basis for a lot of the health benefits of cloves. The flavour of cloves has been alternately described as floral but with strong undertones of eucalyptus. The flavour of cloves can very easily overpower other spices, especially if they're used with the oils still intact.

Cloves are a popular spice in many cultures and, like I mentioned earlier, have to be used sparingly and with caution as they can very easily dominate a dish. Cloves that are sold as spices are normally what we call 'exhausted cloves,' as they have the majority of their oils stripped from them. This makes them less powerful. One way of testing if your cloves are 'exhausted' is by pressing them hard with your fingernails. If they release a little oil, then they have not been stripped and therefore are more powerful. Cloves are also considered to be 'warming' spices and contain several nutrients, which make them an incredibly healthy spice.

Cloves can be used both whole and ground. In Asian cuisines they're used in spice mixes, to add fragrance to broths and pilafs, and are an important part of drinks like masala chai. In Europe, cloves are used to add flavour to meats, in baking and in seasonal specialties like mulled wine and gingerbread. They're also used to make 'pomanders,' a Victorian English tradition where cloves are studded into oranges and handed out as presents to perfume the air and provide 'warmth and comfort' during festivals.

RELATED:  The Spice Box - Getting to Know Dill

Buy whole cloves, if possible, as they retain their fragrance for longer. Like a lot of spices, ground cloves degrade faster and should be used up straight away. Look for plump, fragrant buds and store them in tightly sealed containers, away from the light. Whole cloves last a lot longer than dried, and are best bought from Asian groceries which have a high turnover of spices, guaranteeing a fresher product.

Non-Culinary and Health Uses of Cloves

Cloves are one of those spices whose health benefits and non-culinary uses almost exceed their culinary benefits. Eugenol, the compound found in clove oil, is used variously as an anti-inflammatory, digestive aid, anti-bacterial, anti-microbial, anti-fungal, analgesic and to help with nausea. The ancient Indian medicinal system of Ayurveda used cloves as an aid for helping with breathing problems as well. Cloves and clove oil were used for a long time in dentistry to help ease the pain of cavities and to minimize pain.

Clove oil is also used in the perfume, aromatherapy and cosmetic industries as it's beneficial in controlling skin irritations like acne and burns. It's also used as an insect repellent, particularly for mosquitoes (now this is a use I can totally get behind!). In Indonesia, cloves are used in cigarettes although they are banned in some countries.

Did you know that the word ‘clove’ comes from the French word ‘clou,’ which means 'nail'? It may also be derived from the Latin 'clavus,' which also means 'nail.' Tradition states that, in Indonesia, a clove tree is planted when a child is born, as it symbolises love and protection. Another tradition also states that burning cloves would stop other people gossiping about you (okay, I'm off to burn some cloves now).

Looking for more spices and herbs to help with your holiday baking?  Here's some of our favourites

What’s your favourite use for cloves? Leave a link to a recipe on your blog in the comments so everyone can check it out!