The Spice Box: Getting to Know Nigella Seeds

Getting to Know Nigella Seeds is part of a monthly series here on FBC called The Spice Box. Primarily written by Michelle Peters-Jones, these articles create a spice primer for new and experienced home cooks alike! 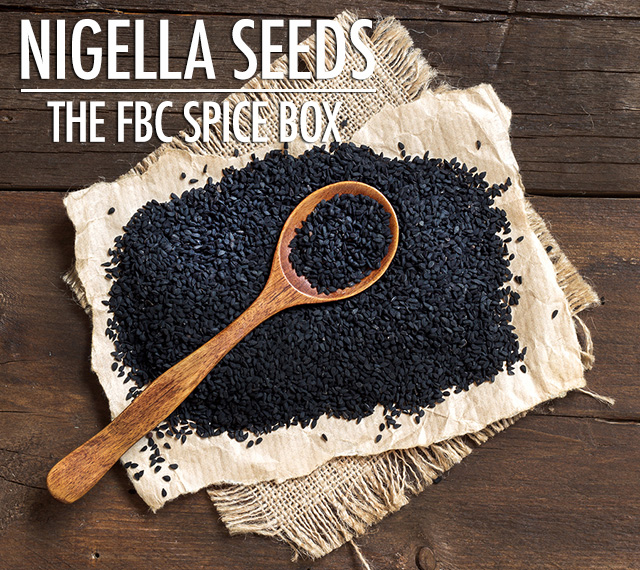 I have a confession to make. A long time ago, I was completely addicted to "The Apprentice. "No, not the Donald Trump version, but the one on the BBC, helmed by the British businessperson Alan Sugar. In one of the first seasons, he challenged the apprentices to find a whole collection of things at below retail prices. One of those, that all the apprentices struggled with, was this spice. I remember yelling at the TV, go look in the Indian markets people, in the Indian markets. They're charnushka seeds, or as they're known in Hindi, kalonji (our FBC editor Marlene would know this name —her cat is called Kalonji). My yelling didn't work, and neither of the teams sourced the spice.

Nigella seeds are also sometimes mistakenly called black onion seeds, but this unique and unusual spice has nothing to do with onions. They are also mistaken for black cumin or black sesame seeds. Nigella seeds are the dried seeds that come from the seed pod of the nigella plant.

Native to Asia and South-West Asia, these plants have travelled across the world, and the spice is used in several Asian, Middle-Eastern, and some European cuisines. The plant and flowers are also used as decorative foliage in gardens.

Flavour Profile and How to Use Nigella Seeds

Nigella seeds have a strong, slightly bitter allium flavour, with smoky undertones of black pepper. They can be distinguished from black sesame seeds by their shape — they are more triangular than oval.

The best way to use them is to dry roast them in a hot, heavy pan, and then use to flavour the dish you're using them for. They are commonly used in Indian, particularly Bengali, cuisine as a topping for naan, vegetable curries and in a Bengali spice mix called "panch phoron'"(five spices). They can be used both ground and whole, though I prefer using them whole, as I find the ground spice can often be a touch on the bitter side (which is characteristic of some Bengali dishes).

RELATED:  The Spice Box: Getting to Know Marjoram

The whole seeds are also used as bread toppings in many other cultures, including Turkish and Armenian bread and in Middle-Eastern flatbreads.

You can source these seeds in any Indian, Middle-Eastern or Asian grocer (I have often found them in the ethnic aisles of Superstore), and they're stored like most other spices, in an airtight container in a cool, dark place.

The whole seeds can be used for almost a year, after which they are still edible, but with a little less flavour than when they're fresh. Use them to top breads and bagels, as well as in curries and spicy pickles. They're usually found under their ethnic name, "kalonji" or sometimes even as onion seeds.

Like most spices, nigella seeds are used in a variety of ancient, traditional and herbal medicines. They have a history of being used to cure everything from flatulence (what is it with spices and digestive problems, eh?) to high blood pressure and breathing problems. They are also known as "seeds of blessings." to reflect their restorative and healing powers.

And finally, did you know that nigella seeds are also called "Roman coriander"? Can't get away from those ancient Romans anywhere! Nigella flowers are also called "love-in-a-mist" flowers due to their dainty pastel colours and feathery foliage.

What have you made with nigella seeds lately? Let us know in the comments!

Great article! We use nigella seeds on our naan all the time.