The Spice Box – Getting to Know Rosemary

Getting to Know Rosemary is part of a monthly series here on FBC called The Spice Box. Primarily written by Michelle Peters-Jones, these articles create a spice primer for new and experienced home cooks alike! 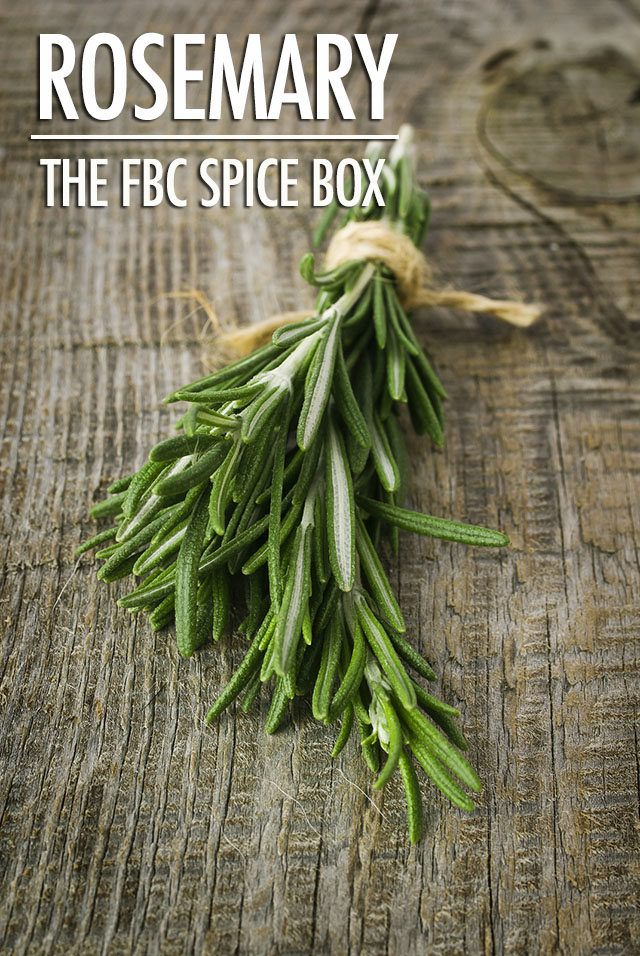 "There's rosemary, that's for remembrance," says Ophelia in Shakespeare’s Hamlet. When I was assigned rosemary as my herb of the month, I was quite flabbergasted. I couldn’t actually believe that I hadn’t officially profiled this incredibly versatile and hardy herb in the spice box. What an oversight! An omission that shall be rectified, forthwith. Indeed.

Known as a ‘miracle’ herb, rosemary is probably very familiar to most of us in the culinary world. It's one of those herbs, however, that's used as a lot more than just a flavouring, being popular as medicine, preservative, anti-oxidant, pest repellant and a mental and physical stimulant.

Native to the Mediterranean region, rosemary has been cultivated and used as a culinary herb for a long time. It's an attractive and distinctive looking evergreen herb with spiky blue/grey/green leaves with purple or blue flowers and a woody stem. It's grown both as an edible herb and for aesthetic reasons.

Rosemary is quite easy to grow, both as an indoor or an outdoor herb. It can be started as seeds or cuttings, and needs well drained, sandy or loamy soil and full sun exposure. The plants can be started indoors and moved outdoors. Rosemary can grow into quite a big plant, so make sure it has plenty of room to grow, or keep pruning it back to ensure delicate leaves. Once summer is done, the plants can be transplanted into large pots and brought indoors, if you wish. Place them near a sunny windowsill. Harvest the leaves as and when you need them, gently cutting fronds at the bottom, and avoiding pulling the leaves.

Rosemary has a very distinctive, strong, resin-like fragrance, thanks to the essential oils in this herb. Some call the flavour almost pine-like, with a camphor, mint, sage and bitter woody aftertaste. Like our last profiled herb, lemongrass, rosemary does not mellow upon cooking, and it needs to be used with caution as it can very easily overpower less assertive herbs and flavours.

Rosemary is mainly used all over Europe and the Mediterranean, as well as in North America, but can be found in other cuisines as well. It's used in both sweet and savoury cooking. It pairs well with hearty meat stews, and is almost a cliche with lamb and other strongly flavoured meats. It's also used in marinades and flavourings for fish, and you can toss in a couple of sprigs with roasted potatoes and vegetables for a delicious herby flavour.

Rosemary can be added to the coals of a barbeque to add a smoky note to barbequed meat and the stalks can be used as a skewers for kebabs. Rosemary, if not used whole, does need to be finely chopped or crushed as it has woody, tough leaves that will be chewy if left whole. Rosemary is also an essential part of the bouquet garni, a group of herbs used to flavour French dishes.

Of course, as I mentioned earlier, rosemary is used just as much for its medicinal properties as it is for its culinary ones. It has been used as an aide to boost memory, as an antibacterial and anti-fungal agent, and as an essential oil in perfumes, cosmetics, home fragrances and other body products. It's grown in rock gardens and other topiaries, and is an attractive herb to plant in the garden. It's used for scenting drawers and you can also use an infusion as a facial toner.

And finally, did you know that rosemary is one of the few herbs that's used both at weddings and at funerals?

Print
My friend and I tried this incredible smoked rosemary gin which she got from her trip to the Okanagan and I knew it would be perfect as a summer gimlet. Who doesn't love an early spring cocktail anyway?
Author: Michelle Peters-Jones
Recipe type: Cocktail
Serves: 1 cocktail
Ingredients
Rosemary Lime Syrup
Smoked Gimlet
Instructions
Rosemary Lime Syrup
Smoked Gimlet
3.2.2925
3.2.2925

What have you made recently with rosemary? Share your tips in the comments and leave a link to a recipe so everyone can check it out!

Have a spice you’d like to see profiled? Let us know in the comments!

Hands down my absolute favorite herb!!