The Spice Box – Getting to Know Turmeric

Getting to Know Tumeric is part of a monthly series here on FBC called The Spice Box.  Primarily written by Michelle Peters Jones, these articles create a spice primer for new and experienced home cooks alike! 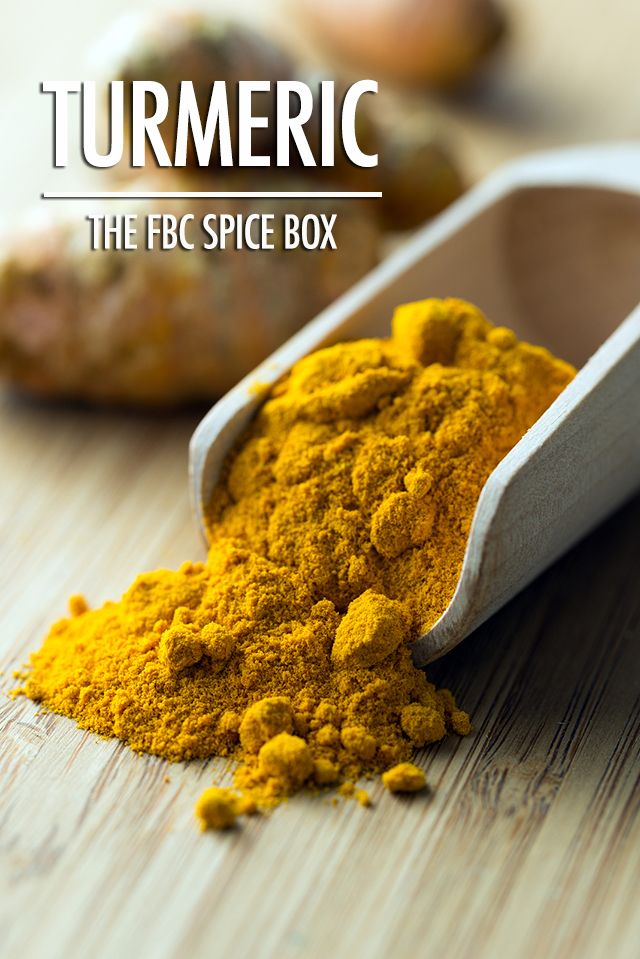 In recent times, turmeric is having a moment in the spotlight. There have been a host of studies on its health benefits, and it is touted as a potential preventative from cancer to depression to its well known anti-inflammatory and antioxidant properties.

Turmeric is a perennial rhizome, native to South India, and is grown all over the tropics, including South East Asia. It requires a significant amount of rainfall and thrives in warm, wet conditions. Originally a member of the ginger family, there are over a hundred varieties of turmeric, and they are propagated using roots.

Turmeric can be used fresh or dried. The flavour of fresh turmeric is slightly more stronger than the dried, powdered version. Fresh turmeric is red or yellow, and once dried, turns into the everyday bright yellow spice that we know it as. It has a pungent, earthy fragrance, a mix between ginger (which it is closely related to) and pepper. Fresh turmeric has a more hot-gingery taste than dried, which has a slightly more powdery, musty fragrance. The taste of turmeric is hard to describe, but it can vary between a gentle spice with lightly bitter overtones.

How to Use and Store Turmeric:

To dry turmeric, the roots are first boiled for about 30 – 40 minutes. They then need to be dried completely. In India, it is common to see large swathes of turmeric drying in the sun. Here, I use a very low oven or a dehydrator to make sure that the roots are dry. If drying in the sunshine, watch the roots carefully over a couple of days to ensure that they don’t go mouldy. Once the roots are completely dry, you can store them whole in an airtight jar, away from the light, and use as directed in the recipe. You can also use a spice blender to powder the roots, and store it in its powdered form. While turmeric can last for a long time, it is best to use it within six months to a year to ensure that you get its full health benefits.

RELATED:  The Spice Box: Getting to Know Basil

Other Uses for Turmeric:

Turmeric, while mostly used as a culinary spice, also has several other uses, the best known of which are its medicinal properties. The main medicinal compounds in turmeric are called curcuminoids and curcumin is the one that gives turmeric its antioxidant, anti-inflammatory properties. The actual amount of curcumin in turmeric is about 3%, so if you want to harness its health benefits, it is best to take it as a supplement. Pharmacies and natural health stores can offer better advice on how to take supplements properly.

Turmeric is also used as an ingredient in folk medicine, especially in the indian Ayurvedic tradition. Turmeric is thought to prevent breakouts, and is used as a component in natural skincare. It is also widely used as a food and fabric dye.

There are many recipes that harness the antioxidant powers of turmeric. My favourite turmeric heavy recipe is my Madras Curry Powder that you can use in place of generic curry powders. You can also add a teaspoon of turmeric to most Indian recipes, even if they don’t call for turmeric. I like adding a good amount to a simple masala dal and a quarter teaspoon to plain rice. Not only does it add a beautiful golden colour, it also gives it an ever so slightly smoky flavour that I love.

I also love this ‘Miracle Tea’ by Robyn Eckhardt (Eating Asia), which combines turmeric with ginger, lemongrass and green tea. It is my secret weapon against colds, and I’ve been making it for a while and managed to stay cold free as a result.

What have you created with Turmeric?  Leave a link to a recipe on your blog in the comments so everyone can check them out!

Great post! I have been trying to incorporate more turmeric into my diet. Here are some links to turmeric recipes on my blog.

These are perfect, Elaine. Thanks for the links.

I just love adding turmeric to recipes! I’ve got a fantastic anti-inflammatory smoothie that incorporates turmeric and tastes like a tropical dream!
http://herbalancedlife.com/2014/11/07/anti-inflammatory-tropical-smoothie/

I use turmeric in almost all my curries and dals (lentils). Here are some recipes on my blog that use turmeric:

In the middle-east we make a dessert from Turmeric named Sfouf. I heard mixing Turmeric with Green increases the “bio-availability” of one another! Great post thanks for sharing.

By far one of my top favorites spices. Thanks for the post.