Canada’s Tastemakers: Stephen Beaumont and Will Travel for Beer

In our continuing Canada's Tastemakers series we profile people who are making an impact on Canada's food scene,  from authors to producers to chefs and more.  Culinary travel may be all the rage but David Ort talks to James Beard award winning Toronto beer writer, Stephen Beaumont, about his 13 beer books including his newest, Will Travel for Beer, beer travel planning, tricks of the trade and more. 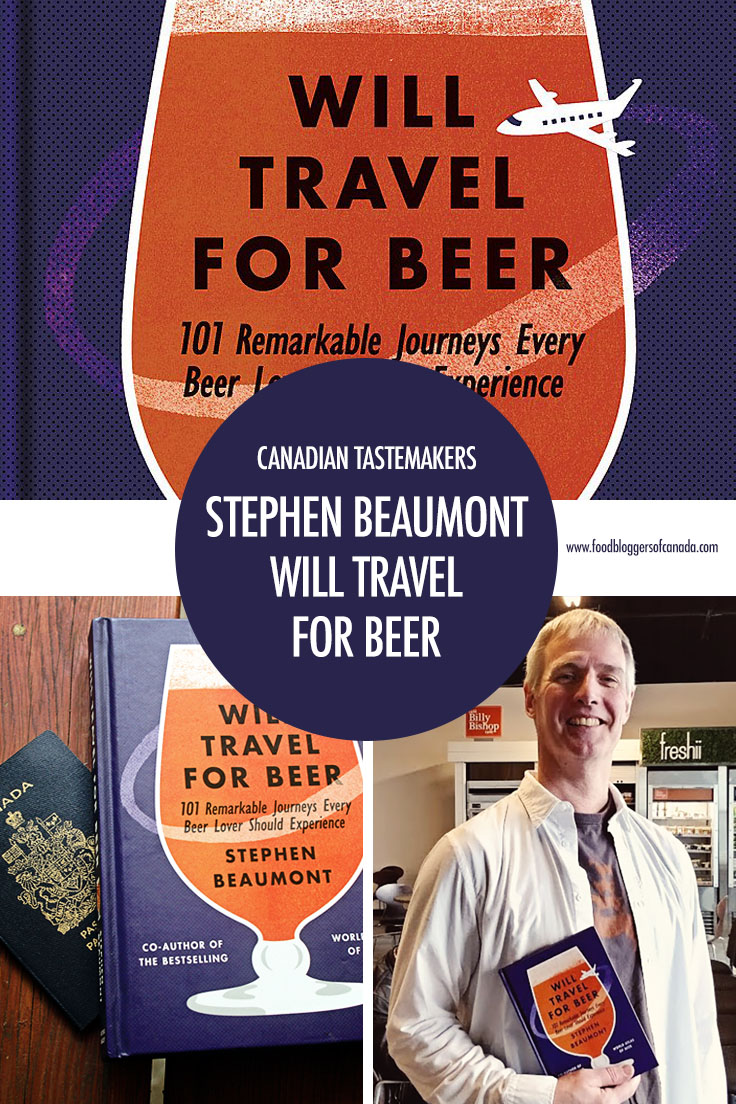 Stephen Beaumont’s thirteenth book, Will Travel for Beer: 101 Remarkable Journeys Every Beer Lover Should Experience, is on shelves now. Back in March, we were on the same trip to Burlington, Vermont for the Beer Marketing & Tourism Conference. We had more than a few beers together, managed to cram four breweries into one afternoon and both announced that we are editing new (and separate) beer magazines in Toronto this spring.

His new book is a guide to those 101 destinations, but it goes well beyond city guides with top pubs and breweries to cover festivals, interesting beer accommodations and extraordinary experiences like a pub crawl by helicopter in Australia.

On the flight home, Stephen generously offered to sit down and talk (with glasses of wine), as best we could over the turboprop whirr, about Will Travel for Beer.

This is lucky thirteen, but can you tell me about what brought you here? 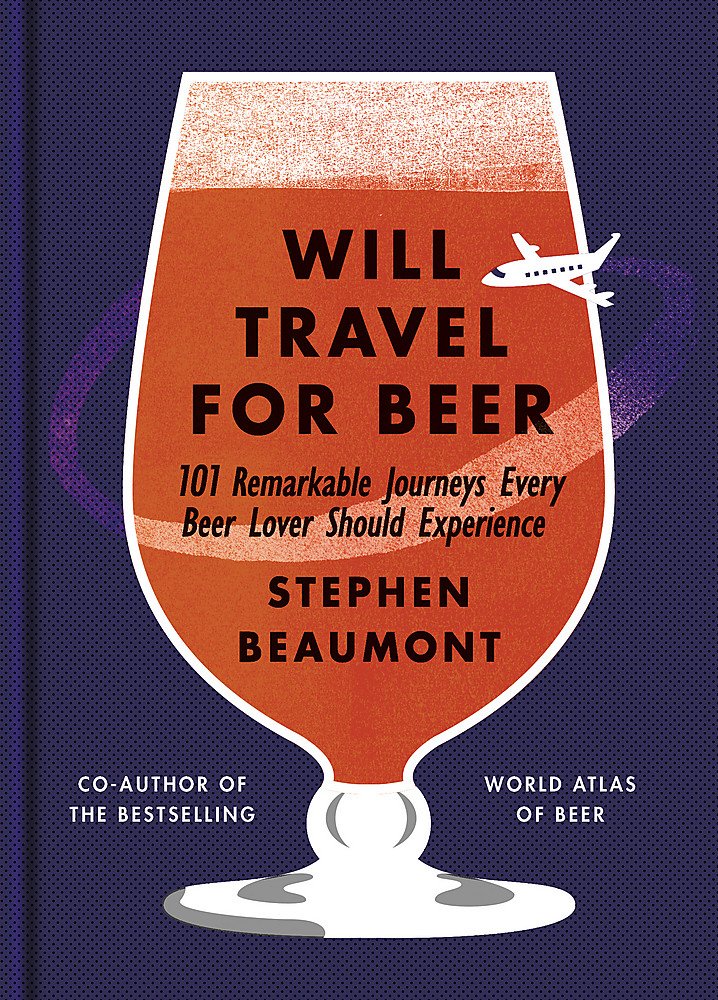 Stephen Beaumont: Number 1 came out in 1994. I’ve always considered myself to be a travel writer. Travel figures into pretty much everything I write.

The Great Canadian Beer Guide was a cross-Canada guide to beer. So, by definition, it was a travel book. I travelled to just about every brewery in Canada in a three-month period.

There were only 82 of them. Buses when necessary, not necessarily buses. A couple of ferries. The worst flight was going Toronto to Sudbury to Thunder Bay to Toronto and the flight between Sudbury and Thunder Bay was the milk run.

Who is the reader for Will Travel for Beer? How are they using it?

SB: There’s a lot of information out there. Travelocity launched a beer tourism index and estimated that, as far back as 2014, 10 million people toured small and independent craft breweries.

There were no books on the market that said: “hey, if you’re going to do a beer journey then these are some of the best places to go.”

So, this is a guide to start that planning?

Which journey is the one to start with to get a sense of how this book is different from other travel books?

SB: The place to get started is whatever’s closest to where you’re going. There’s enough geographic scope in the book that most everyone is going to have something that is near them.

Did you do any of the travel specifically for the book?

Also, I made a specific trip to Halifax to update my knowledge of Nova Scotia breweries.

If you’re travelling for beer and beer-writing research would you rather be travelling alone?

SB: I’d always rather be travelling with Maggie [his wife]. That said, when I’m travelling alone I can be fleeter of foot. It’s not unusual for me to be in a town one day and hit 10 to 15 pubs.

Is there anything in your travel kit for beer travel? Hangover cures? Special kits for bringing bottles home?

SB: My favourite hangover cure is not to get hungover. Pretty good at that. I haven’t had a hangover in a long time.

My rule of thumb is: If I’m in a hotel for two nights I don’t unpack my bags. Anything over two nights I unpack them quickly. The first thing I do when I get to a hotel room is looking at everything. What makes sense for how I’m going to set up for how long I’m there. And then I’ll get to unpacking and getting things away.

What’s your first stop after unpacking?

SB: Usually, if I’m travelling alone and I’m going for research I’ll have something in mind for the first stop. Often it’s meeting someone because I have fellow beer travellers and what I call my beer spies all over the world. And often they’re very helpful to me in showing me around and helping get to the heart of the matter in a quick fashion.

We did four breweries yesterday organized from lowest intensity to highest. Is that what you’re always trying to do?

SB: Absolutely. I go to brewery websites. As terrible as a lot of them are, I’ll research them and I’ll use Google Maps. I like to avoid taking transportation as much as possible. I’ll look for groups — maybe a couple pubs and two brewery taps in a certain area — and then I can take the Tube out there or maybe a taxi and I can just walk between stops.

Other than brewery websites, what about Ratebeer or other aggregators of beer information?

SB: Not really. Occasionally, I’ll go to Beer Advocate to verify addresses. It’s amazing how many brewery and bar websites don’t bother to list the addresses in a prominent position or the hours they’re open. Basic stuff like that.

SB: I think there are parts of the world that do. North America definitely does not. North America needs more interesting beer festivals. I’m supportive of the idea of theming beer festivals. Getting them to have a narrow focus. There’s a new festival they did last year down in New England, a pilsner festival. That really appeals to me. I like the idea of celebrating pilsner and getting all those great lagers in one place.

Any other favourite themed festivals?

SB: I always enjoy Cask Days. I’ve written it up for the book, I think it’s a great festival. It has very little to do with cask conditioning because a lot of the beer is from breweries who don’t really know how to do cask conditioning so they do something goofy and stick it into a cask.

Who collaborated on the book?

SB: I have three contributors to the book. One is my World Atlas of Beer co-author Tim Webb. Tim has been to a couple of very interesting places, including the world’s most northernly and most southernly breweries, so I had him write about those.

It had been far too long since I had last been to Cork, but I’m a fan of the city of Cork in Ireland, so I had John Duffy write up that.

And there’s nobody who knows beer in Australia as well as Matt Kirkegaard, so I had Matt write up a couple of places there.

What city in Germany do you most like to travel to?

SB: That’s really tough. I can say that one of my favourite brewery-crawl cities is Cologne. I love kolsch beer and that quirky accident of history. The city itself is spectacular, easy to get around. To be able to go from pub to pub to pub and only drink one style of beer is really interesting. And then you jump on a train and in half an hour you’re in Dusseldorf to do the exact same thing with a different style of beer.

You wrote about various large Oktoberfests. Is it worth going to the original?

SB: Absolutely. I avoided Oktoberfest for years and when I first went, I was so pleasantly surprised. What a lot of people who have never been to Oktoberfest don’t understand about it is that it’s not just the beer tents — it’s a Bavarian cultural festival. It’s very important to the Bavarian people. That's what makes it completely different than what most people think it is. It takes a lot of advanced planning because Munich hotels sell out very quickly. Staying outside of Munich is a handy little trick. You can just train in and out of the city because Oktoberfest is right inside the train station anyway.

Is there one thing that is happening in a lot of places that you’d rather see go away?

SB: There’s a slight trend towards infantilization. Making things that are cute and kitschy or making things that strain dangerously close to alco-pops. The world doesn’t need another pastry stout. There I went and said it. I want to see the end of that terminology completely. I had one last night from a brewery I highly respect, High Water Brewing and Steve Altimari (he’s a brilliant brewer), but as soon as I ordered it, I regretted it.

What’s something we haven’t talked about that you want readers to know about Will Travel for Beer?

SB: I keep coming up with tricks of the trade. I travel a lot. Noise-reduction headphones are worth their weight in gold. Sterile wipes — I sit down on an airplane seat and I wipe the whole thing down. I can’t afford to get sick and that’s a good way to avoid it. I credit Maggie for that one. She’s the one who got me into that.

Are there any tricks for a brewery taproom?

Do you find that because you’ve been a beer reviewer, writer and author that you have trouble shutting off that part of your brain and just enjoying the beer?

SB: Well, yes and no. I’m always thinking about the beer’s flavour profile. Which isn’t to say that I can’t just sit down and enjoy a beer. I do quite often. In fact, after five different stops and five different tasting flights, there’s nothing I like more than just having a pint. In fact, that’s one of the ways that I avoid getting drunk. When I stop thinking about the beer, I realise that I’ve probably had too much to drink.

So, I don’t shut off really, but neither do I obsess.