This week’s Canada’s Craft Beer post comes from our BC craft beer guy, Bryan Clegg. Today Bryan takes us on another Vancouver beer tour, with eight stops at craft breweries in the Brewery Creek beer hub.

In the City of Vancouver, there are two major beer hubs, Brewery Creek and Yeast Van. We’ve already taken an epic walking tour of Yeast Van, so now it’s time to give Brewery Creek the same treatment!

Brewery Creek has been a beer hub since the late 1800s, when an actual creek ran through the area down to False Creek. The booming business died down, however, and prohibition killed it off. It wasn’t until 1997, when R&B Brewing opened, that the brewing business in Brewery Creek sputtered back to life. And now it’s become a thriving area, with over half a dozen Vancouver craft breweries calling the area home.

So without any further ado, let's get this tour going!

How Do You Get to Brewery Creek?

As everyone knows, I’m a big fan of transit. How do you get your whole crew doing a beer tour without forcing anyone to stay dry? Simple: take advantage of Vancouver’s great transit system!

To start, take the Canada Line to Broadway-City Hall. From there it’s a short 10-minute walk to our first stop. Or, if you’re arriving by bus, the Number 9 stops a mere two minutes away from our first stop. The Broadway Corridor is a very well served transit route, with regular buses running east to west. For those coming out using the Expo or Millenium/Evergreen lines, the 9 runs at high frequency from Commercial-Broadway station and only takes 10 minutes to get to our chosen stop.

Check out the map here for your walking route. I’ve arranged everything in the most efficient order, assuming Canada Line start and finish points, from Broadway-City Hall to Olympic Village. The entire loop hits eight different breweries in a mere 3.9 kilometres. If you were walking the route non-stop, you could do the whole thing in less than an hour! Less time walking means more time doing what we’re all here to do — drinking beer!

I always say, don’t drink on an empty stomach. Lucky for us, our first brewery stop of the day also serves food! The menu changes depending on what time you start your tour. If you do this on a weekend between 10 am to 2 pm, you will order from their brunch menu.

After 2 pm? Check out the pizza menu. There are also all day items including a cheese board, charcuterie board, pretzels, and more.

Just a short eight-minute walk lies our next stop, Main Street Brewing. Located inside an industrial heritage building originally built in 1913, this is a beautiful space with a great atmosphere.

A mere three minutes after leaving Main Street you’ll arrive at Brassneck Brewery. After opening in 2013, Brassneck immediately became one of the darlings of the local craft scene. With a beautiful space, and a huge variety of high quality beer, it’s no surprise!

Brassneck is a "nimble" brewery, meaning they focus on small batch releases sold exclusively at the brewery. This gives them the ability to constantly experiment and play with new recipes. This creativity and variety has made Brassneck a must-visit brewery stop in Vancouver.

Seven minutes from Brassneck lies our fourth stop, Red Truck Beer Company. This brewery plays up their relationship to the past with plentiful old-timey imagery and marketing material that waxes poetic about the good old days.

A short walk takes you to R&B Brewing Co. Having opened in 1997, they’re the oldest brewery in Brewery Creek, and one of Vancouver’s oldest overall. They’ve managed to stay nimble and keep improving in a very competitive market, as evidenced by their award for top North American IPA in the 2017 BC Beer Awards. 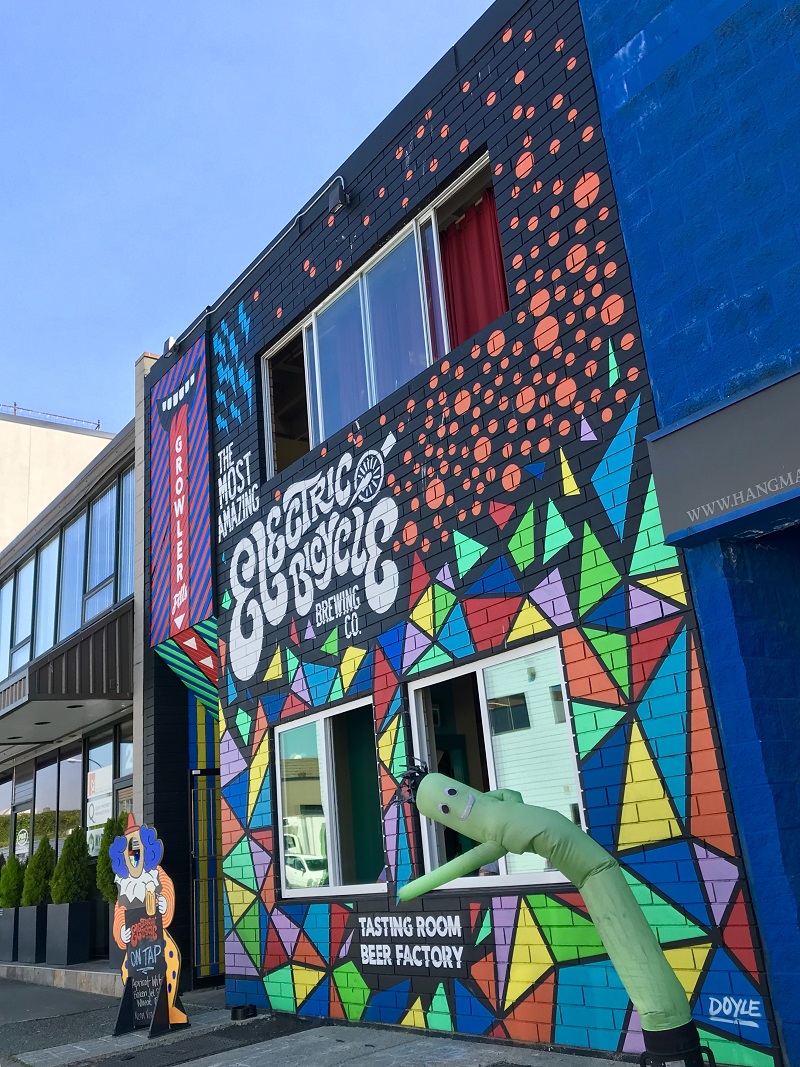 If I only had one word to describe this brewery, I would just say "rad’."From the taproom decor, to the growler artwork, to the beer names, everything about it just makes me think what a rad place it is. Everyone seriously needs to visit this tap room, if for no other reason than to soak in the aesthetics!

Thankfully, that’s not all you’ll be doing, as they pour a variety of groovy beers and serve some seriously good sandwiches.

Just a few streets over from Electric Bicycle is Faculty Brewing Co. Faculty’s focus is on making craft beer more approachable via education. Head brewer Mauricio has a background as a professor, and he’s brought that experience to the table here.

Every Faculty recipe is open-source, meaning it’s been released to the public for others to use. If you check out their recipe page you can see the beers listed in order of difficulty using a university-like numbering system. And of course, to go along with this great concept is a constantly rotating list of cool, experimental beers for you and your crew to try!

Big Rock falls under the label of local-ish. They’ve been around quite a while ... but in Alberta. The Vancouver brewery is relatively recent. So, they’re not local in the sense that they’re an Alberta-owned brewery, but they are local in the sense that they’ve got a huge brewhouse producing a lot of beer right on site, so I’ll give them a nod here.

They’ve also got a great food menu, and by the time you’re at this stage of the tour, you’ll likely have worked up an appetite!

There are a lot of great restaurants in the area, such as Tap & Barrel and Craft Beer Market. Both have great food and great beer, though Craft Beer Market takes the win with the larger beer selection. If you want to close out your tour with a shot at a big, varied menu, this could be a good finale.

Whether you finish your tour at Big Rock, Craft Beer Market, or Tap & Barrel, you’re not far from a skytrain! Olympic Village Station on the Canada line is *very* close to Big Rock. And if the Expo Line is better for you, no problem, it’s a short walk along the False Creek Seawall to Main Street-Science World Station. Whichever way you need to go, getting home without a car is easy!

Looking for Other Craft Beer Tours?