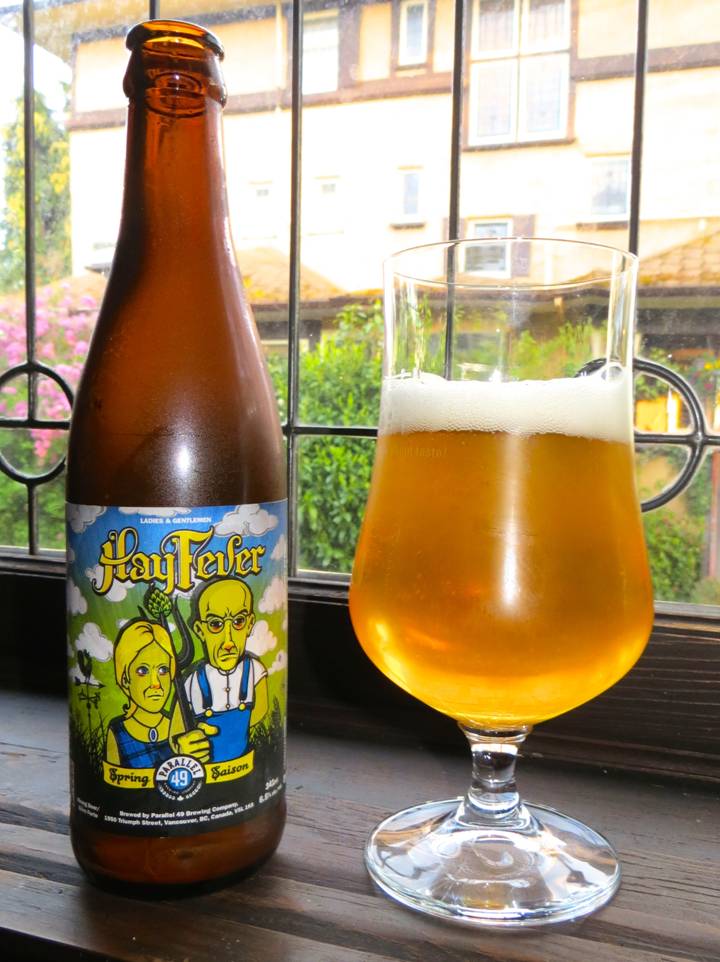 We're excited to have Joe Wiebe (aka The Thirsty Writer) join our Canada's Craft Beer team.  Joe will be covering Western Canada while David Ort continues to focus on Eastern Canada!

For my first Western Canadian craft beer blog I thought I’d follow my eastern colleague David Ort’s inaugural post on I.P.A.’s by featuring another style that has become increasingly popular in recent times: the Saison. Originating in Wallonia, a French-speaking region of Belgium, Saison ales are also called “Farmhouse Ales” because they were brewed by farmers in the winter, re-fermented in barrels and then served to the field workers or “saisoniers” in the summer. If you haven’t tried one before, Belgian brewery Dupont’s Vielle Provision Saison is generally seen as the prototypical example, and it is pretty widely available in Canada.

Stylistically, they can vary considerably, but most modern Belgian Saisons are very dry and effervescent with fruity characteristics. Dupont’s flagship version features an extremely pungent aroma that is at once sour/funky, floral, citrusy and spicy—a unique combination that is reflected in the complex taste. Saisons are among the most thirst-quenching beers around; once the glass is empty, it can be nearly impossible not to fill it up again.

Several Western Canadian breweries produce Saisons, sometimes as limited releases and some full-time. Here are a couple of the most interesting.

The “boomiest” among the recent boom of new breweries in Vancouver, Parallel 49 seems to put out more styles of beer than anyone else. Almost all have been solid, but this Hay Fever Saison is one that stood out from the crowd for me when it was first released last year as a spring/summer seasonal. And now that it’s back again, I think it’s even better.

Hay Fever smells, tastes and looks very much like Dupont’s original—only missing out on the extra carbonation, creamy mouth feel and sour/musty oomph that bottle conditioning adds to the Vielle Provision. Still, the six-pack option makes this a very attractive summer sipper guaranteeing it will enjoy a regular rotation in my fridge in coming months.

Spinnakers Gastro Brewpub is celebrating its 30th anniversary this year—it was the first brewpub to open in Canada and is still going strong three decades later. It’s been undergoing a bit of a generational shift in recent years thanks to the influence of brewer Kala Hadfield (daughter of owner/Publican Paul Hadfield) who has introduced more hoppy and Belgian styles to the beer list. The Dragonfly Rye Saison is a very interesting variation on the style—although it smells like a traditional Saison, the rye adds a rich, earthy flavour that fades into a slight fruitiness with a nice dry finish.

Spinnakers is celebrating 30 years of beer on Thursday, May 15 from 3-11pm with a Parking Lot Pig Roast & BBQ, featuring beer sampling from the past three decades, Beer Olympics, live music, Beer & History Tours, and more.

Other options to look for: Driftwood Brewery’s Farmhand Ale (brewed with a sour mash and cracked black pepper that you feel in your sinuses); Four Winds Brewing makes an excellent Saison in the Dupont style, and also puts out occasional bottle-conditioned versions with wildflowers or Brettanomyces (sour/wild yeast); Steamworks Saison is excellent; and Townsite Brewing’s Belgian brewmaster Cédric Dauchot brews his 7800 Saison to emulate the version made in his home town, 7800 km away from Powell River where he now lives and works.

FYI – Hay Fever is a Spring Seasonal and is almost finished in market. Seed Spitter Watermelon Wit is about to be launched for Summer. So better stock up!!