The Saint John River valley is one of the most gorgeous areas in Canada, in my opinion. Rolling hills, picture postcard scenery and quaint towns line the river that divides New Brunswick in half. The town of Nackawic lies on the east bank of the river about 65 kilometres west of the capital city of Fredericton and is home to the World's Largest Axe as well as Big Axe Brewery.

Peter and Tatiana Cole, who fell in love with the area during a visit, opened a bed and breakfast in 2013 and the brewery came on line in 2014. The top floor of their large home, which is two minutes off the Trans-Canada highway, has three rooms for the B&B. Each comes with a flat screen TV and an ensuite bathroom with a heated floor and tiled shower or a Jacuzzi tub; two rooms have their own private sunrooms.

The 53 acres of riverfront property are also accessible by four wheeler trails in the fall, by boat in the summer and snowmobile and cross country skiing trails in the winter. They serve a European style breakfast that includes freshly baked homemade croissants, fresh fruit, and a selection of jams, ham and cheese, fresh juice and coffee or tea. On occasion they also offer gourmet dinner options made with local seasonal ingredients for an additional fee.

The brewery is creating some of the coolest beers on the east coast, using a variety of local ingredients including maple and birch sap, sumac, chanterelle and chaga mushrooms, and partridgeberries while brewing IPAs, Wits, Stouts, Porters and Lagers. Their current brew system is 1 BBL and they have tap room hours from Thursday to Saturday for drinks and growler fills. When I stopped in I got a flight, which is served in a little picnic table, to enjoy on the deck while sipping and enjoying the view. The taproom is worth a view too, with their own photographs in repurposed windows up on the walls. 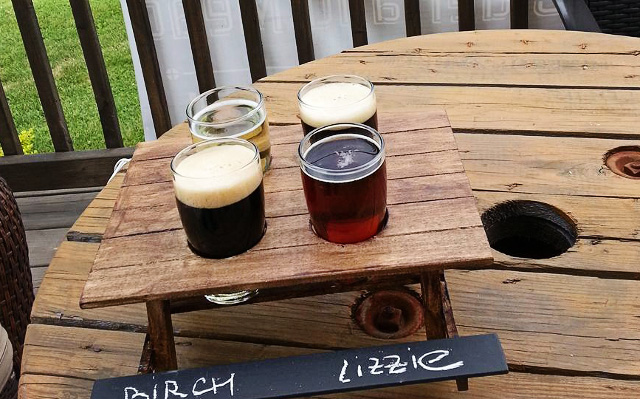 I recently spoke to Peter and big things are afoot. Adjacent to the B&B, a large new brewery is being constructed in a log-style building to match the natural surroundings. Still need a reason to visit? They're also hosting their first craft beer festival on July 15, 2017 from 4 to 8 PM, featuring New Brunswick's craft beer, cider, mead, wine and special brewery guests from Nova Scotia and Maine.