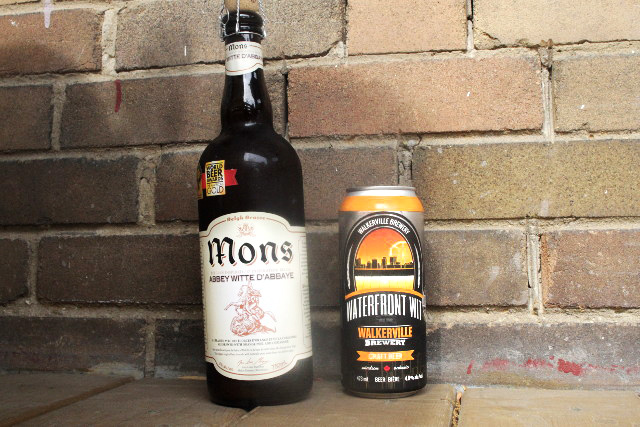 Why do so few craft breweries in central Canada make a witbier? The Belgian-style wheat beer, recognizable for including coriander and orange peel in the recipe, is perfect for afternoon sipping on hot summer days.

Mill Street’s Belgian Wit is quite good and is widely distributed, but that can’t be enough to discourage everyone else. After all, Side Launch’s German-style wheat beer has been around (previously under the Denison’s label) for over a decade and that hasn’t kept others from entering the German side of the wheat beer market.

Could it be that craft brewers are worried about how their beer will be perceived if it’s served with a slice of orange? Maybe, but that hasn’t stopped them from creating Berliner Weisses that often get an equally impure dose of raspberry (or woodruff) syrup in the bar.

It could also be that witbier has a short season — it's seen as a style strictly for the hottest days of summer — and with Ontario's notoriously complicated retail system, it can be difficult to pinpoint a release date.

Things are getting better and the selection is growing. To the point, in fact, where we have two Belgian-style wheat beers to consider today that are both from under-recognized breweries in Ontario and Quebec.

Walkerville, named after Hiram Walker, the founder of the distillery empire that brought the world Canadian Club, is traditionally a whisky town. So, it stands to reason that the local craft brewery must have done something right to find a following there.

Walkerville Brewery's Waterfront Wit is hazy yellow beer under a cap of tight, white foam. The aroma has a nice combination of wheat and citrus zest but its flavour is the real standout characteristic. All of the traditional elements of witbier — a slightly tart wheat character, bright orange zest (from Florida oranges, in this case) and mellow coriander seed — are amplified so that they all complement each other without a single one dominating.

RELATED:  Craft Beer: Embracing autumn with a hint of pear

In the shade or sun, this is a perfect summer refresher.

Belgh Brasse has been making beer in Amos, Quebec for over fifteen years, but you might not have heard of them. Amos is over six hours by car from Montreal in Abitibi, that part of Quebec due north of Ottawa. Over the course of the brewery's history, they have made a variety of different Belgian-inspired beers. The Mons line is named in honour of founder Jean-Louis Marcoux's home city.

Mons Abbey Witte is a hazy light yellow with a white head that falls quite quickly and leaves behind a good amount of lacing. On the nose it has a faint note of rising dough with a complementary citrus snap. Good carbonation helps lift the slightly sweet beer into a dry, coriander-accented finish. A more subtle wit, which, given its 750-ml size, is well-suited for sharing after an active summer day.

ABV 5%, Available widely including ON, QC