Food bloggers use a vast array of tools to turn out quality blog and social media posts, like computers, cameras, smartphones, apps and editing tools, to name a few. One of the most crucial tools bloggers possess is our moral compass. Tiffany Mayer reflects on ethics in blogging, and the impact of ethical decisions on integrity and credibility. 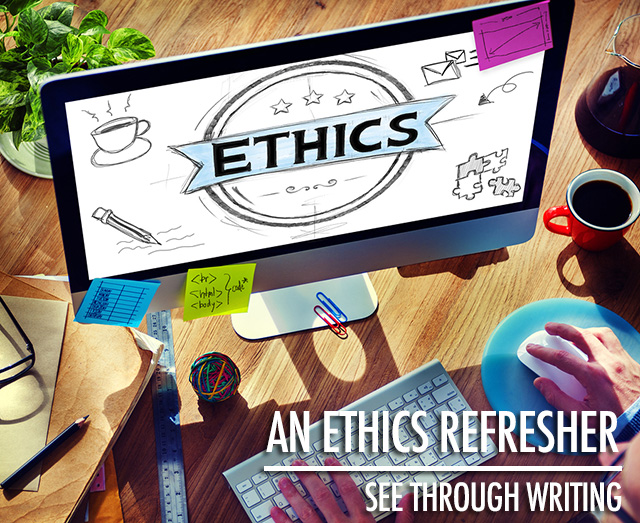 The other part is whether to disclose when you do.

Nothing sparks a discussion on blogger threads or in newsrooms like ethics. For some people, there are no shades of grey in the answer. You either do or don’t take freebies — or payment to promote a product or service — and if you do, you say so in plain language in a prominent place in your story or post.

That wasn’t the case last year, however, when 50 fashion bloggers took to Instagram on the same day to post photos of themselves in identical dresses. It was part of an ad campaign by U.S. department store Lord & Taylor to promote a new clothing line.

It turned out to be a brilliant marketing move, flooding one of the most popular social media sites in the world with photos of fashionable influencers wearing the same thing. The dress sold out a few days after the blitz.

As a token of thanks, the participating fashionistas got a free dress and were compensated financially for their posts, which Lord & Taylor vetted beforehand; yet none of the bloggers disclosed the retail giant sponsored their images.

In response this spring, the U.S. Federal Trade Commission came down hard on Lord & Taylor for violating digital advertising guidelines and “misrepresenting the ads were from independent sources.” The bloggers were spared any serious reprimand, but they, too, could have faced sanctions for not disclosing.

So what’s the big deal?

In the weeks since the FTC’s decision, there’s been incredible scrutiny of bloggers, and followup on whether some of those Lord & Taylor Instagrammers are now following the rules. Many aren’t and they’re being skewered by industry watchdogs.

Canada doesn’t have such regulations but that doesn’t mean we, as food bloggers, should post sponsored content without declaring it. Those American regulations of disclosure apply to any of us creating content that reaches an audience south of the border.

It’s true that sponsored content doesn’t perform as well when it comes to racking up likes, and that can mean a smaller paycheque for some campaigns. But the real perk of being transparent no matter the audience, is winning the trust of our readers who’ll see their favourite bloggers as credible and ethical sources.

“There’s a commercial risk (to not disclosing),” says Ivor Shapiro, who teaches ethics and chairs Ryerson’s School of Journalism. “Your audience will feel betrayed and not want to return to your site or trust you about particular things.”

Anecdotally, I’m seeing more #ad and #sponsored hashtags showing up in my own Instagram feed. I’m also seeing plenty of #notsponsored tags from people asserting a post is honest and self-generated, and not to be confused with any paid endorsements. But shouldn’t that assumption be safely made about a post that doesn’t state it's an ad?

The simple answer is yes. Shapiro says that’s an “implicit statement” we make in our own voice every time we publish something.

Figure out where you stand on the issue of disclosure as a blogger.

To do that, it might help to consider how you feel as a consumer when you see something you aren’t sure is an ad. As a reader, do you want to know if a writer has been influenced by swag or money to gush about their avocado scoop?

For further guidance, the Canadian Association of Journalists, which promotes excellence in journalism, has a long list of ethics guidelines that provide many accountability cues. This one, though, is worth highlighting:

We pay our own way whenever possible. However, not all journalists or organizations have the means to do so. So if another organization pays our expenses to an event that we are writing about we say so, and this includes when covering industries such as travel, automotive, the military and foreign trade… . (There are some generally understood exceptions; for instance, it is common practice to accept reviewers’ tickets for film previews, concerts, lectures and theatrical performances.)

“In my book, there isn’t any visible difference between blogger and journalist,” Shapiro notes. “The standards that apply to Kevin Donovan in terms of accuracy, independence and transparency, those standards apply just as much to Margaret Wente as to you as to Peter Mansbridge. It doesn’t matter who you work for. Those standard should apply.”

So should you declare the review copy of a cookbook you received? Could you have done your job without it? What about that free five-course meal at the new white linen restaurant desperately seeking press?

For Shapiro, the answer is easy. Follow your moral compass and listen to your gut. If you don’t tell anyone you got that $200-meal for free in your glowing restaurant review, or were compensated in some way for a post, ask yourself why.

“I doubt it’s about not knowing any better. That moral compass is something most people have,” Shapiro says. “We’re not talking about regulations. We’re talking about individual morality. Life is about basic things. We know right from wrong. We know when we’re doing something wrong.”

See-Through Writing: An Ethics Refresher was written by Tiffany Mayer, a freelance journalist and author of Niagara Food: A Flavourful History of the Peninsula’s Bounty (History Press, 2014). She blogs about food and farming at eatingniagara.com. You can also listen to her newly launched food podcast, Grub.