This week’s Canada’s Craft Beer post comes from our Eastern Canada craft beer guy, David Ort, as he looks at brown ales as a possible contender for a great summer beer. 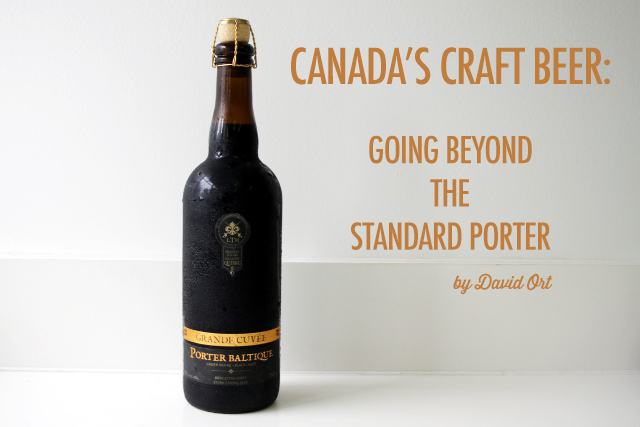 Porters are one of the oldest beer styles – IPAs, abbey tripels, and pilsners are all green by comparison. They are sometimes described as stout's weaker and less well-known cousin, often associated with London and industrialization, and otherwise fairly difficult to define. In Tasting Beer, Randy Mosher wrote that "studying the history of porter is like staring into the multidimensional universe of theoretical cosmology, with multiple shifting parallel worlds constantly warping and shifting the flow of time." Its history has also not been a straight line; the style nearly died and was revived in England during the 20th century. It's safe to say there isn't one prototypical example, but there are several that sit near the center of the scattershot chart.

Once porter leaves its homeland, strange and sometimes wonderful things happen to it. A probably-only-partially-true beer history factoid holds that the court of Catherine the Great fell in love with exported English stouts and porters. At some point, local Baltic breweries decided to capitalize on this fashionable taste and make their own version. These local versions used lager yeast but otherwise were faithful copies of the original. To some degree, this means that Baltic porters have been frozen in time and are possibly a closer representation of what early 19th century English porter tasted like.

Here on the far side of the Atlantic, porters are taken as a convenient base for that very North American compulsion to differentiate your product by throwing in whatever is at hand. Ontario's LCBO lists a cherry porter, maple porter, and a rum barrel aged version of the style. Great Lakes Brewery in Toronto makes a series of porters with somewhat cheeky names like Harry Porter and the Bourbon Soaked Vanilla Bean or Harry Porter and the Cherry Hoarder.

Like Baltic porters, smoked porters recall an earlier time in the style's history when a lack of technology meant that a crude kilning process gave most malted barley a smoky flavour. This month I have two beers that I think do a great job of representing both of these unusual diversions from the standard porter.

The moderate tan head slowly falls back and allows plenty of time to contemplate this enforced of a beer. The usual suspects for dessert – I get chocolate, vanilla, and cherries – dominate the aroma. This dovetails nicely with the sweet flavours of dark raisins and prunes that lead into a dry, roasty finish.  Les Trois Mousquetaires Grande Cuvee Porter Baltique is an extraordinary beer from one of Quebec’s top breweries.

Blacksmith was the first widely distributed beer from South River, Ontario’s new brewery. Two fingers of rocky, tan head sit on top of the jet black body. Only a bare wisp of smoke touches the aroma of sweet brown bread. The flavour  of Highlander Blacksmith Smoked Porter has more it on the finish after it opens with sweet vanilla and a toasty nuttiness. This is a fine sipping beer, but doesn’t have the heavy dose of smoke like many German rauchbiers, so won’t stand up as well to smoked food.

Both of these selections stretch the boundaries of the style description. And that’s okay. Porter is a big tent and especially because it’s such a popular cool-weather style we need options.