This week’s Canada’s Craft Beer post comes from our West Coast craft beer guy, Bryan Clegg. Today he explores Belgian Strongs — no, not the horses, but big and powerful beers. His investigation takes us to three breweries: Parallel 49, Townsite Brewing and Driftwood Brewing.

Belgian beers are a wide-ranging and wonderful style of beer. This month I’m going to take a look at some Belgian Strongs (itself a pretty varied category): more precisely, two Quads and a Strong Golden Ale. Quads are one of my favourite styles because of how big and powerful they are. Quads are the "biggest" of the Belgian Strongs, with huge malts, flavours, richness and the ABV to match. What’s not to love? In fact, one of my most memorable beer drinking experiences was going through the steps to unlock the Trappist Travesty badge on Untappd — a task that culminated in opening a wonderful bottle of Westvleteren 12. Ah, memories.

Anyway, on to the beers! 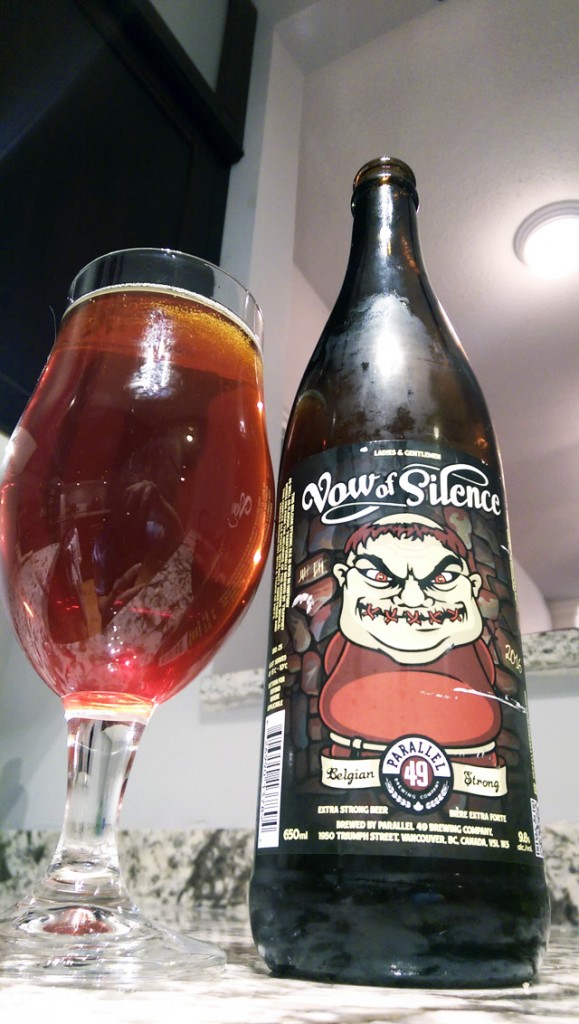 The first selection this month is Parallel 49’s take on the Belgian Quad. Vow of Silence opens the nose with sweetness and malts, then brings it even stronger in the taste. In fact, I find Vow of Silence to be too sweet. I can find some raisin in there, and of course it’s very malty. But I just couldn’t get past the sweetness; I even had trouble finishing the bottle. I’d recommend sharing it with a friend or two, that way you don’t get so much that it becomes cloying.

This quad from Townsite is rather delicious, with fig, malt, sweet, and bourbon on the nose. I found the taste well balanced, not too sweet. Bourbon is there but not overpowering, along with raisins/dark fruits, and a smooth finish. I’m impressed.

Driftwood Brewing — Son of the Morning

Let me start with this: Driftwood's Son of the Morning is not a Belgian Quad like the other two beers. It’s a Belgian Strong, and matches up nicely with the others in terms of ABV but it’s a golden ale, meaning it’s golden instead of dark, and leans towards effervescence as a way of bringing out the flavour. My determination to include Son of the Morning this month is the reason I had to call the article Belgian Strongs instead of Belgian Quads (I could have had the title “Work Those Quads,” but alas ...).

RELATED:  Canada's Craft Beer: The Collaborative Side of Craft Beer

So why was I so gung-ho to review it here? First, it hasn’t been brewed in years and, as such, I’d never had it. Second, the label is stunning. Like, seriously. Driftwood has been knocking out of the park with their labels lately and this one sets the bar at a new level. I can’t stop looking at it.

But what about the beer? It’s pretty good! It’s got light fruits, a bit of sweets, a bit of yeast going on along with a bit of hop bitterness. It all comes together rather nicely and isn’t heavy either, making it very easy to polish off the bottle.