In this week’s Canada’s Craft Beer we head to BC with our western Canada beer guy, Bryan Clegg. He’s looking at what might be his favourite beer style, sour beer. He reviews offerings from Parallel 49, Steel & Oak, and Driftwood, confirming that 2015 is a big year for sour beers in BC.

My first experience with a sour beer was a few years ago, fairly early in my transition to a craft beer-drinking fanatic. I was at St. Augustine’s on Commercial Drive in Vancouver with some friends and had a sample glass of a Flanders Red Ale brewed by Storm Brewing just down the road. It was something I could only describe as a spiritual experience. How did I not know sour beers existed? And where could I get more? Thus I was acquainted with what just might be my favourite beer style.

Modern sour beers are created from the addition of certain types of bacteria and yeasts in addition to more traditional brewer's yeasts; Lactobacillus, Pediococcus and Brettanomyces are the most common strains used to produce sour notes in beer. What’s interesting is that in the old days, all beers were sour to an extent. That’s because back before the advent of modern refrigeration and sanitation methods, wild yeast strains producing sour flavours had a way of getting into the brew whether brewmasters wanted them or not. But technology caught up and those external influences were eventually eradicated -- other than those brewers that purposefully brew their beers to be sour.

Belgium is the home of the sour with highly regarded producers such as Cantillon and Rodenbach. But more and more, brewers in other parts of the world have been experimenting with making sours. And I was one of the happiest people around when I first heard whispers that 2015 would be a big year for sour beers here in BC.

Four Winds kicked it off earlier this year with the phenomenal Nectarous Dry-Hopped Sour (another batch is on the way and possibly here by the time you read this -- go get some!). More recently Driftwood, Parallel 49, and Steel & Oak have dropped some tasty offerings of their own. Let’s check them out!

This is the lighter of Parallel 49’s two offerings. They call this a Summer Saison blended with real apricots and lactobacillus culture. It has a nice apricot flavour, though it could be a bit stronger in my opinion, and a light tart element, mostly on the finish. The sour here isn’t enough to scare anyone away, which makes it the kind of thing you’d introduce to someone who isn’t sure about sour beers and wants to dip their toes in the pool. 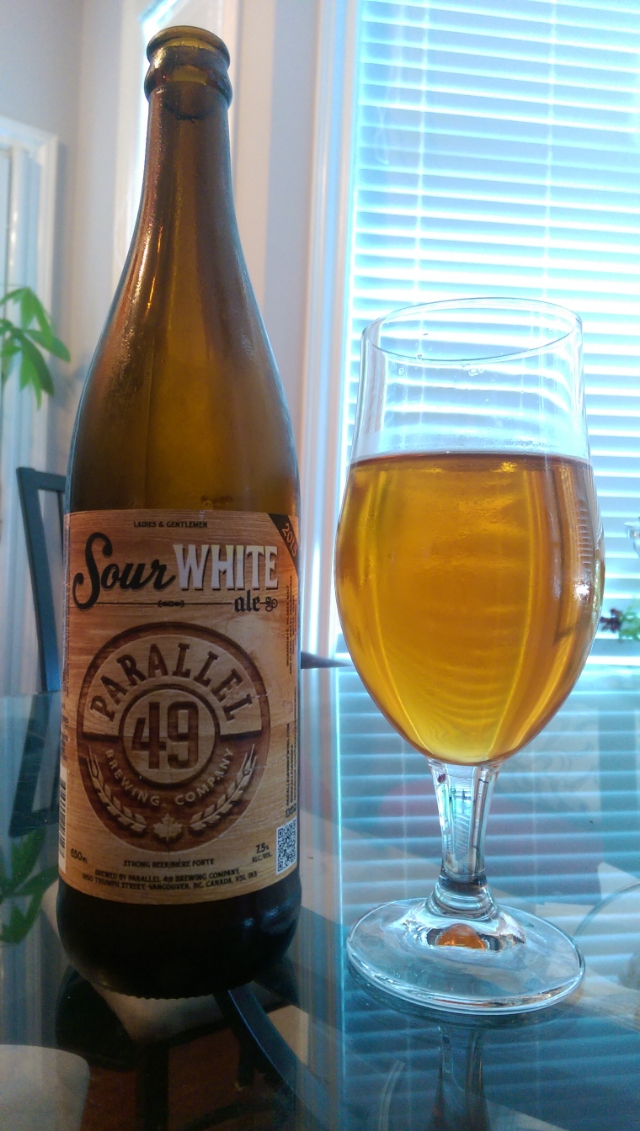 Part of P49’s barrel-aged series of beers, this Sour White Ale was aged in French Chardonnay barrels for over a year (I’m a sucker for barrel-aged beers). The pour is golden with a minimal white head that disappears immediately. It offers a nice aroma of grapes and sour funk. The taste is the same, with a bit of oak, sweetness and something a little bready. A solid beer, worth checking out.

The one-year anniversary beer from Steel & Oak (Happy Birthday S&O!) is another winner. Sour Red Lager, seriously? Lager is the one style of beer that craft beer nerds tend to shrug at more than any other, but S&O have come out swinging with the intent of proving that lager doesn’t have to be boring. This beer pours a light cherry red with a big off-white head and a fruity aroma. The taste has more sweetness, complex fruits, a malty base and a light tart finish.

This isn’t a big-time sour by any means, but it’s a damn fine beer.

Driftwood makes the best (in my opinion) series of sour beers in BC, known as the Bird of Prey series. This series has included releases such as: Flanders Red, Mad Bruin, Belle Royale, Lustrum, and now Obscuritas.

Obscuritas is a Dark Sour, with a nearly black pour and a beige head. The aroma promises dark fruits and tartness and the flavour is more of the same. It begins with malts and fruits, then finishes with oak, tart cherries and vinegar. I feel the vinegar throws off the balance just a little bit, but it’s pretty minimal. Overall, a really nice sour.

Check out our Summer Flavour Trend Report: Beer Beyond the Glass  for all the unexpected ways beer will be popping up in your food this fall and winter with Dana McCauley!