Canadian Community Cookbooks looks back at our grandparents' cookbook shelves for history and community in the spiral-bound collections of recipes created by church and community groups across the country. Think of them as historical artefacts, moments at the stove frozen in time. Today Gabby Peyton looks back at her roots with the Cook Book Featuring Favourite Newfoundland Recipes. 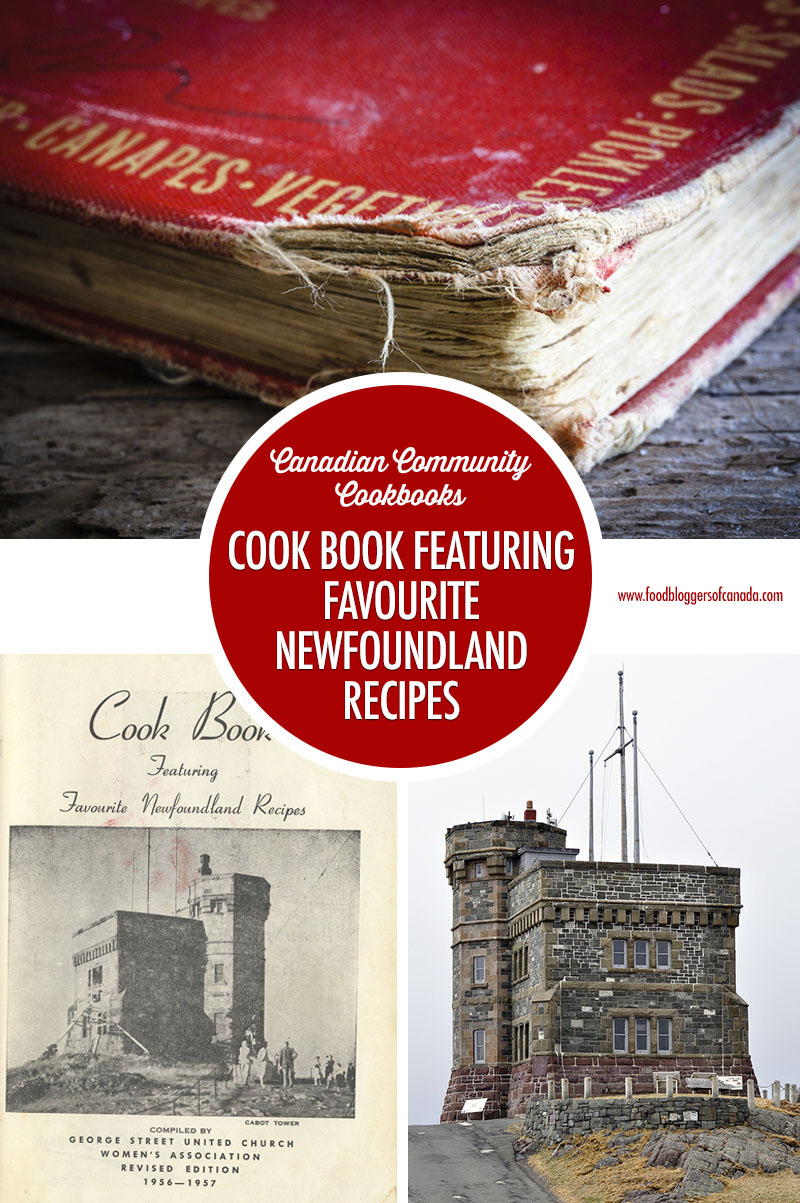 Editor's Note: Our article on the history of the Nanaimo Bars inspired the idea for this series on Canada's community cookbooks. Do you have a favourite Canadian community cookbook that your family has used for decades? We'd love to hear about it in the comments!

George Street in St. John’s, Newfoundland has a certain reputation. The street, known near and far for its large number of drinking establishments, has always been a place to share a drink with friends or listen to live traditional music. But on the quieter end of the street — the section that’s been cut off from the bars by the new convention centre — is the George Street United Church, which has stood since 1873. There, its Women’s Association created a series of cookbooks featuring their own dishes and showcasing the cuisine of Newfoundland.

For generations, these “church lady” cookbooks were shoved into shelves with their plastic spiral spines bending under the weight of The Joy of Cooking, but they stood the test of time. Your mom’s best casserole probably came from a cookbook just like this. Thanks to technological advances, many of these favourite community cookbooks have been digitized by various public domains. Cooks in Victoria can now read a Newfoundland church cookbook as easily as a granddaughter can rip it from the shelves of nan’s house in Fortune.

With this wealth of delicious knowledge, we can dive in and learn about the community in the cookbooks: the (more often than not) women who created the books, the recipes they chose to include in the books, and the congregations they fed with them. Thinking about the community cookbook as a historical artefact — a moment at the stove frozen in time — can reveal a whole new way of seeing it, cooking from it and even eating!

At the End of George Street

The George Street United Church sits at 130 George Street, nestled between a parking lot for the new office building and down the street from a flower shop. The 146-year-old white church constructed with stone from the Southside Hills stands tall as the second Methodist congregation in the city. It became the George Street Wesleyan Church in 1925 after joining the newly-formed United Church of Canada and that’s when those church ladies got cooking and writing.

Created by the George Street United Church Women’s Association in 1956, the Cook Book Featuring Favourite Newfoundland Recipes comes in the classic community cookbook template with a simple cover with an image of Signal Hill (which to this day is the most recognizable landmark in St. John’s) and spiral bound.

In her foreword, Muriel McKay, the Women’s Editor at CJON radio (later rebranded as NTV), writes, “we do have some ‘unique’ foods — as much a part of our cultural background, our heritage, as the sea itself.” McKay claimed that every Newfoundland housewife can be proud of her culinary art, predicting it will be a treasured cookbook home and away.

The recipes run the gamut with classic Newfoundland recipes and whole sections devoted to partridgeberries (collected and tested by The Jubilee Guilds), as well as pickles and preserves. The first section outlines typical Newfoundland cookery and even calls out some simple recipes of the Beothuk, the indigenous people who were wiped out by the arrival of colonist Europeans in the 19th century. The editor stipulates they didn’t actually try the recipe for Beothic Stew but “it might prove useful to your husband if he has any tendency to getting lost on hunting trips.”

Other historical dishes like colcannon or corned beef hark back to the British and Irish ancestry of the majority of Newfoundlanders. There are also several recipes for boiled puddings like Peas Pudding and Figgy Duff. Get figgy with it and explore the history of Figgy Duff in our series on iconic Canadian food.

Back When Cod Was Still A Newfoundland and Labrador Staple

Spoiler alert: there are a lot of cod recipes in here. This cookbook was published almost 50 years before the 1992 cod moratorium and the wealth of fish in Newfoundland and Labrador was still at its peak. Salt cod recipes dominate this section — salt fish with drawn butter, salt cod cakes, cod tongues and even jowls and fish faces are written about. There’s a full page devoted to Fish and Brewis, a hash of salt fish, hard tack and scrunchions (cubes of salted fatback pork).

The most notable absence in this book? Jiggs’ Dinner. The classic of the classic Sunday dinners in Newfoundland is missing, and for good reason: no respectable housewife would need a recipe for Jiggs’ Dinner — that would be like saying you didn’t know how to boil the kettle. Blasphemous.

The Importance of Preserving: It Must(ard) Be Pickled

Preserving has always been an important part of the Newfoundland kitchen. With long winters and a short growing season, housewives pickled, bottled and preserved summer vegetables to serve them on cold snowy days with dinner. Pickled beets, onions and cucumbers dominate the pages.

There are also several renditions of mustard pickles, which are still a staple at Sunday Jiggs’ Dinner. Mrs J.E. Butler’s recipe for Cauliflower Mustard Pickles is a classic, with tiny florets of cauliflower mingling for months with the mustard pickles. The hearty rhubarb that grows like a wildflower in Newfoundland also makes it into the cookbook, with at least a dozen recipes for chutneys and relishes

While cod may have been king for the traditional Newfoundland cook, there's no shortage of 1950s classics amongst the George Street United Church Women’s Association. Casseroles reign supreme in this section. So too does the use of canned ingredients and Carnation milk. Along with Macaroni and Cheese or Shepherd’s Pie, there is also Hot Tamale Pie, Ham Scalloped Potatoes, and Chicken Pot Pie made with canned chicken soup.

Economy Ham Loaf is made with canned pineapples, canned ham and ground veal while the recipe for Irish Italian spaghetti is basically a homemade meat sauce with no reference to an Irish ingredient whatsoever.

The George Street United Church Women’s Association cookbook is a meal frozen in time. From the ads for Elizabeth Arden makeup and Cream of West flour to the use of preserved ingredients which dominated Newfoundland’s cuisine for the better part of 500 years, it paints a picture of the dining table like no historian could.

Before you dive into the book, just so we are all clear, as they explain in the book: whorts are blueberries, partridgeberries are lingonberries, dogberries are the berries of mountain ash and bakeapples are cloudberries. Now you know!

READ THE ENTIRE BOOK: You can read the entire cookbook at the Memorial University of Newfoundland's Digital Archives Initiative Website.