You may know which classic Canadian dishes you like, but do you know the stories behind them? And how can we define Canadian cuisine if we don’t know its past? In Iconic Canadian Food, Gabby Peyton shares the back stories of a smorgasbord of iconic Canadian dishes. Today she explores the history of Chicken Bones, a staple in Atlantic Canada Christmas stockings.

They were always there at Christmas time: the bowl of chicken bones on my grandmother’s sideboard. If you tried to grab one as you walked by, 10 would inevitably stick together in your hand, and most of the time no one liked them enough to eat the whole handful.

No, I’m not talking about a pile of leftover bones, I’m talking about the traditional candy made by Ganong. This bright pink hard candy with a chocolatey centre has been a polarizing confection for over a hundred years. You either love them or you hate them … or you’ve never heard of them.

Here’s the history of Chicken Bones.

Chocolate to the Bone

The unlikely pairing of chocolate and cinnamon found their way into Chicken Bones more than a hundred years ago in New Brunswick. Ganong, Canada’s oldest family-owned chocolate factory, was founded in 1873 in the town of St. Stephen’s by the Ganong brothers James and Gilbert. 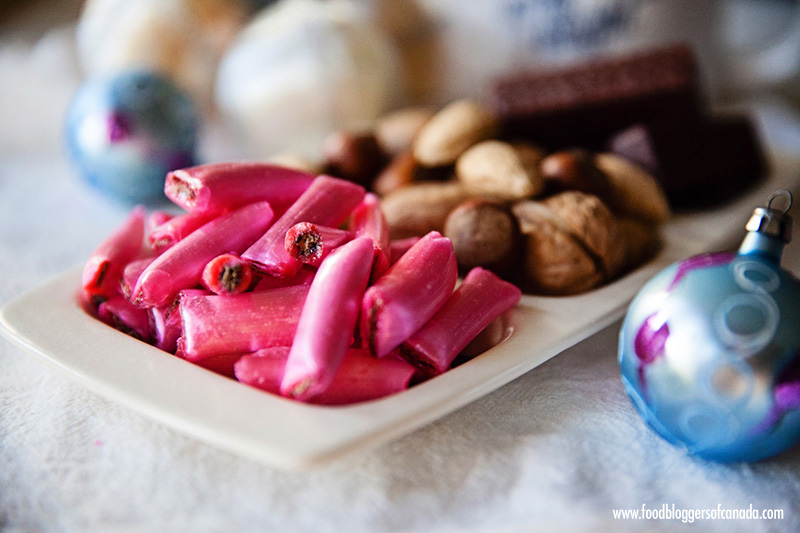 In 1885, an American candy maker by the name of Frank Sparhawk moved to St. Stephen’s from Baltimore to start working at the Ganong factory. Chicken Bones was just one of the boiled sweets the candy savant created during his tenure at the St. Stephen’s factory. During the last part of 19th century, Ganong created new candies every month as the penny candy industry was just beginning to flourish in North America. The candy stick was a favourite among Canadian children, and Ganong was also pumping out Dudes, Sunbeams, Zoo-Zoos and the All-Day Sucker, a precursor to the lollipop.

Those dear Bones have outlasted them all as the only hard candy Ganong still makes — more than 700 million candies have been made to date. The bright pink candy exterior is still hand-stretched and then rolled to encapsulate the dark chocolate centre.

The sequestering of this candy is partially due to the flavour combination, partly because of their anonymity outside of the East Coast. Opinions are strong about Chicken Bones … some people love to see that bowl of pink bones on the sideboard, but others roll their eyes at the mention.

One thing everyone agrees on is that Chicken Bones are a huge part of Christmas tradition in the Atlantic provinces. Many a stocking in New Brunswick and beyond has been stuffed with Chicken Bones for over a century. While no one really knows why Chicken Bones became associated with Christmas (even the CEO of Ganong wasn’t able to explain why), they're a staple on the East Coast. Western Canadians can usually find them in drugstores and big box stores in December - a little piece of home for the holidays for those Atlantic Canadians who've migrated west.

After more than 130 years, Chicken Bones remain one of Ganong’s best selling items. The marrow of nostalgia is strong in them Chicken Bones.

SUBSCRIBE TO GET YOUR FREE SPICE BOX EBOOK
You are subscribing to the FBC Food Lovers Newsletter.
You can unsubscribe any time!
Click Me
121shares

Thank you, it’s very interesting to know the subtleties and history of the cult dishes of Canada.

hello,i enjoyed the article.the town you refer to is St. Stephen.thanks.