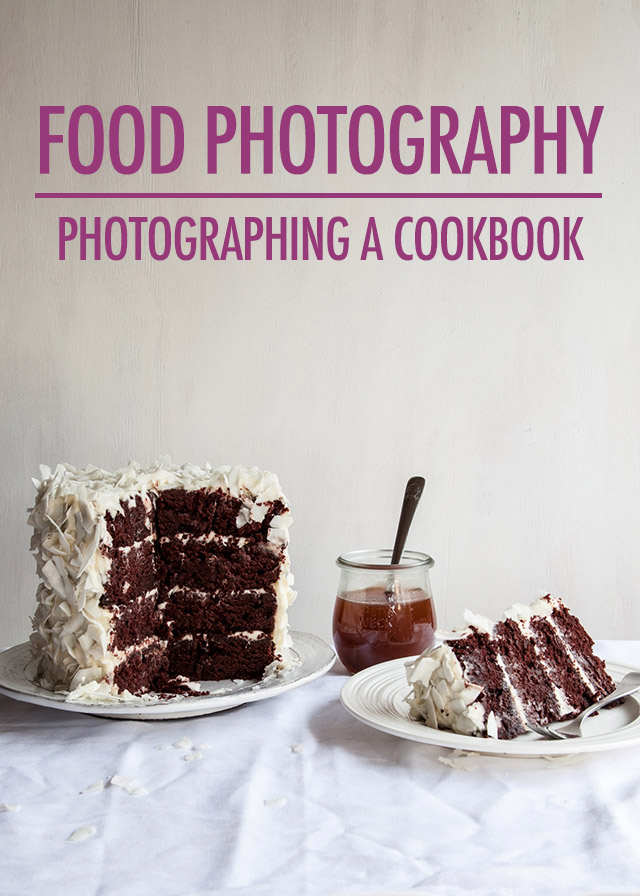 Today’s food photography post is a bit different than what I typically write about here. Instead of discussing ISO- or talking about how to control natural lighting, I'm sharing what it's like to photograph your own cookbook. My first cookbook, Layered: Baking, Building, and Styling Spectacular Cakes was recently released on April 19. I wrote, styled and photographed all 288 pages myself! Some of you might be wondering what it takes to turn your images into a tangible book (or even an e-book), so I thought this would be the perfect opportunity to share my experience.

Of course, I can’t speak for all photographers, but shooting my own project was both exhilarating and nerve-wracking. Please understand that this information is purely based on my own personal experience (with a few industry tidbits tossed in), and it may or may not be standard for all books with a heavy amount of original photography.

That being said, how do you photograph your own book?!

For me, it started with the proposal. When I decided to try to write a cookbook, I made the decision that I wanted to be the photographer as well. I made this decision very early on in the process, so I had to make sure it was included in my book proposal (the 10- to 15-page document sent out to publishers before getting a contract). For my book in particular, the images are a huge part — full-page photos for every recipe (sometimes two) plus plenty of other stylized images throughout. I knew that photographing it all myself would take up a majority of the cookbook making process, but doing it myself was very important to me.

In the end, I think this even became a big selling point when it came to pitching to publishers. From the publisher’s standpoint, they would not have to hire/organize/schedule/pay a separate photographer, so the concept of me doing double-duty was very appealing. I’m not sure if that was one of the deciding factors for offering me my contract, but it very well could have been. If being your own photographer is a deal-breaker, be sure that the publishers know it’s a packaged deal.

Once you decide to shoot your own book, it’s time to get organized! I knew I wanted at least two images per cake recipe: one of the completed cake and one of either the assembly process or a cake slice. Since there were 60 cakes, I knew this meant shooting hundreds and hundreds of images.

The first thing I did was create a schedule. Instead of working on a recipe, photographing the result, editing, then writing the recipe entry for the book, I decided to split up the different types of work. I committed to doing all of my recipe testing/developing and photography first, then going back to edit the images and write at the end. I had about six months until the manuscript was due (first round of photos included), so the schedule looked like this: recipe test and photograph three to five cakes per week for the first four months, then edit, write, re-test and re-shoot the remaining two months.

I built in some wiggle room along the way to account for uncooperative recipes and re-shoots, but for the most part this schedule saved my sanity. In contrast to my limited experience working with a professional photographer in a studio where all of the recipes are photographed within a week or two, I liked having more time to style each photo individually and felt less pressure to make sure it was perfect before quickly moving onto the next cake.

Since this is a single-subject book, there was a tendency for the images to all start looking the same. When you want to show off a tall, layered cake, there are only so many angles you can shoot from. As the title indicates, the book is all about layered cakes. It wasn't broken into chapters to include cupcakes, bundts, or loaf cakes. Just 60 different layer cakes, all with relatively the same shape and size. In order to keep things interesting and not so repetitive, I relied a lot on styling. And while there wasn’t a ton of room to play when it came to shooting the whole cakes, there was plenty of different ways to shoot and style cake slices (some half-eaten, yum!), ingredients, garnishes, et cetera.

A great visual way to keep track is to print off proofs of the images as you take them. Like many photographers do while working on a project, you can even tape them up on a wall in the order you plan to publish them. This way, you can see everything all together, make adjustments as needed and see what gaps need to be filled.

Before I even started, I made a spreadsheet that included the styling involved and what props I planned to use for each recipe. I definitely didn’t stick to it 100 percent, but it did help keep me from using the same cake stand or backdrop over and over again. I like my images to tell a story, so I thought about what each cake was really about, the ingredients, when/where this cake might be enjoyed, and the headnotes I wanted to write to go along with each recipe. From there, I filled in my spreadsheet with descriptions for the styling like “rustic,” “Grandma’s kitchen,” “whimsical birthday party” and “apple-picking season.”

That all being said, there still needed to be be plenty of consistency throughout the book. I wanted to make sure all of the images had a similar style and felt like they all came from the same, cohesive book. This was not the time to experiment with different editing techniques or dramatic changes in styling. I erred on the conservative side — not too trendy, not too moody — since I hope this book will live in your kitchens for a long time.

This might be a super-obvious statement, but make sure your photo matches the recipe. Of course, our intentions are for this to happen from the beginning, but if the recipe changes or develops over the process, make sure the photo still reflects the final version. In such cases where I changed the recipe after the photo for one reason or another, re-shoots were necessary.

In the end, I took far too many photos, but it's always better to have options. I photographed the whole thing using natural light (another reason why I did the photos first, because it was summer). I used my Canon 5D Mark ii with a 28–135 mm lens and a 100mm macro lens. Even though I find it constricting, I used a tri-pod as much as possible.

Logistics and Backing Up

Before snapping that first pic, it's best to find out exactly what the publisher is looking for. As far as style, my editor was flexible yet conservative. She liked the photos on my blog, so I tried to bring the best qualities of my current work to set.

Equally important, find out the type of file (.TIFF for print) and what size the photos need to be, and how the publisher would like to receive them (they'll be way too big to send over email).

For large print projects like this, always shoot in RAW. I recommend editing in Lightroom as well, because you don’t lose information when editing (for example, we considered using square images, so it was great to have all of the data still on my computer when I had to go back and crop to a different dimension).

I was so nervous about losing files over the few months it took to shoot the book. I backed up all of my files to an external hard-drive before deleting from my memory card — a good practice we should all keep. I also made sure to check the images on my computer (not just on the camera) before completely tearing down the set to make sure I got the right shot. Shooting tethered to your laptop can really help this process.

Lastly, one quick word about ISO, even though I know I started by saying we wouldn’t talk about those kinds of things today. Since we know that the higher the ISO = more sensitive to light = more grain/noise, it's best to keep the background noise to a minimum for print. I recommend keeping the ISO between 100 and 400.

Food Photography: Photographing Your Own Cookbook was written by Tessa Huff. Tessa is a Vancouver-based pastry artist, food stylist and photographer. Before moving to British Columbia, she was a cake decorator for several years and owned her own cake boutique. Tessa currently runs her blog, Style Sweet CA, and is a freelance recipe developer and photographer. Her first cookbook, Layered: Baking, Building and Styling Spectacular Cakes, was just published (Abrams Books, Spring 2016) and she's also having fun spending time with her husband and their baby boy. Follow Tessa on social media: Facebook , Twitter, Pinterest and Instagram.

SUBSCRIBE TO GET YOUR FREE SPICE BOX EBOOK
You are subscribing to the FBC Food Lovers Newsletter.
You can unsubscribe any time!
Click Me
129shares

Woohoo!! Excellent post, Tessa… and SO helpful! (especially to me right now, as I work on shooting my book… aiyahhhh) ! Also… now I’m craving all of these cakes! XO

Those photos! Those cakes! I simply must get this book. And thanks for all the great photography tips — they’ll come in handy for the one fancy cake I make a year, lol. Actually, they’re great for a lot of food photography.

Thanks a lot! It’s really helpful, as I’m planning to make a mono cook book as well.
Those tips are so logical but it’s great to read them all summed up 🙂

Such a helpful article. I love knowing what goes on behind the scenes.

Great article Tessa, congratulations on your new book. I look forward to reading and enjoying it. Thanks for the tips 🙂