So, you have a Facebook Page for your blog.  And you've noticed a big drop in page views recently.  And you're freaking out.

This Dangerous Minds article came out a few weeks ago, claiming it was an attempt by Facebook to make us pay for promoted posts.

Where does the truth lie?  I don't know.

There are two paths this article could go down - one is that, as bloggers, we have to get rid of this expectation that we are owed services for free because "we're just a little hobby blog".  (Remember the outcry over Feedburner a few months ago?  The panic in the blogging community was quite something to watch...)  I have a "little photography hobby".  Trust me... nobody gives me camera equipment or printer ink for free and my local camera store does not accept warm chocolate chip cookies as payment... oh but how lovely that would be!

Or, we could take a look at how to make the most from your Facebook fan page, with or without paying to promote your content.  Let's take that path today!

I realized months ago that Facebook was changing how the game was played and I decided to start experimenting with the three pages to see what worked and what didn't (I like to poke and prod!).  What follows is purely anecdotal and very unscientific.  But hopefully you'll find some useful tidbits that you can put to work for your page.

When I first noticed our FBC views and engagement were dropping like a stone, (and which had always been very healthy in relation to the number of fans we had) I thought it must be our content... we must be boring, people don't care what we're saying, nobody likes us!!  Eeks!

It was probably the best thought I could have had because it made me want to up our game.  I started looking specifically for fun or useful things to share with our fans, or asking questions that, I hoped, would get people wanting to reply.  Sometimes, it was as simple as asking what food related activity people had going on for the weekend and sometimes it was something a little more substantial.  It seemed to work - we certainly didn't get back to where we were but our engagement level started to climb back up.  People were interacting.

If Facebook has indeed change their spam algorithm as they say, and all you are doing every day is simply posting a link to your latest post, you do quickly become spammy and people will click the "hide" button (which, from the sounds of it, tells Facebook you're spamming). 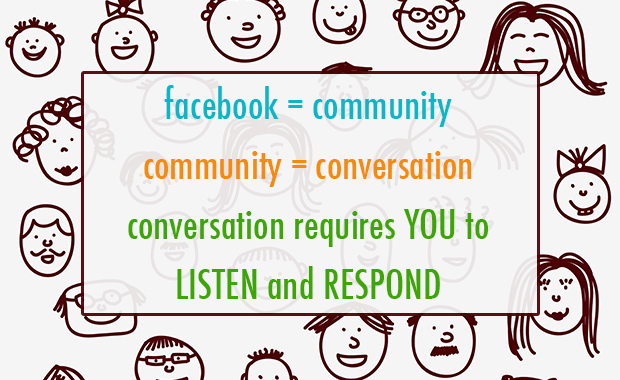 No, don't create a new personality just for Facebook - instead infuse who you are into your updates.  FBC's Facebook page is maintained almost exclusively by me.  The status updates are written in my voice - usually exactly how I would speak if I were having a conversation with you.

I was chastised once by a fan for using the word "y'all" in a status update when I'm supposed to be Canadian.  Well, I am Canadian and very proud of it - but I say y'all in every day conversation! I also use a lot of exclamation points, have a weakness for ridiculously bad puns and jokes, and can quote most Seinfeld episodes word for word.  If you follow our Facebook page regularly, you'll have figured all of those things out.

My point is, people who follow us, know that the page is run by a real human being and not a corporate entity who's probably not listening

Ok, I have to reference a very famous Canadian here: as Marshall McLuhan said "the medium is the message".   Now that guy was one heck of a visionary and I would love to know what he would think of world of social media if he were still alive!

Facebook, Twitter, Google+ and whatever comes down the pipe next are all very different mediums. To make the most out of them, you have to figure out what works best for each one.  This is why using a generic plug-in that updates them all at the same time with the exact same update is not a good idea (and it looks like a robot is running your accounts - it does nothing to help you with my last point!)

While I run the FBC Facebook page, Ethan runs our Twitter account.  And there's a very good reason for that.  They're different mediums and require a different approach.  Ethan has a great twitter personality (and by the way, he says "y'all" a lot too!) but I feel more comfortable with the slower pace of Facebook.

Fill Out All Your Profile Info

Make it easy when people visit your page to know they're at the right page for your blog.

It's certainly something to consider.  But think about it carefully.

First of all, if you have less than 400 fans, you can't promote a post - it's not an option.  Second, how much you pay to promote is directly proportional to how many fans you have - the larger the number, the more you pay.

Choose the post to promote carefully.  For our first promoted FBC post, we chose our Canola/FBC 2013 Cookie Contest.  It cost us $10 - an absolute steal in comparison to a press release! It was seen by over 4000 people and garnered a stack of new FB fans and a lot more "post shares" and "likes" than we normally get.  But most importantly, this was a post we really wanted people to see - people who might not have us in their RSS reader or who follow us on Twitter.  We also recruited 19 new FBC Members during the time the post was promoted.

Here's what I've also noticed since we ran that promoted post... our engagement levels are much higher.  We now average around 1/3 of our fans seeing our posts - double the normal Facebook average of 15%.  Is it because we chose to pay? Or is it because we're doing a better job of engaging?  I'd like to think it's the latter but it's probably a combination of the two.

Last But Not Least

Facebook is notorious for tweeking and changing things, no matter how much uproar springs from it.  Get used to it.  And remember, solid content, being engaging and interesting with your fans, and understanding how each Social Media channel works will always serve you well.

Getting the Most From Your Facebook Fan Page was written by FBC co-founder Melissa Hartfiel. By day Melissa is a WordPress web & graphic designer at her own little company, Fine Lime Designs.  By night, she's a professional food photographer and author of the food photography blog Eyes Bigger Than My Stomach.  In between she leaps tall buildings in a single bound.  Well, not really, mostly she just hangs out with her dog and eats chocolate.

Thank you very much for this post! I will be creating a Facebook page shortly and this has helped me to understand how to use my new page more effectively.

I’m sure lots of people will find this post very helpful. I particularly liked the emphasis you placed on creating real conversations with the community and describing the FBC model where each channel is managed by the person who is most comfortable doing so. Many organizations think one person can/should do it all. Sometimes that model works well. Other times it doesn’t. Thanks for demonstrating it often takes a village.

FWIW, I’ve found that if I post a photo along with a link, I usually get more engagement. I think FB tends to sideline plain link statuses in favour of pictures, so I usually find I get more people talking with a picture. People are also quite visual, and images often talk more than just words.