Glutenberg Brewing: One of the World’s Best Gluten Free Beers

In 2012, about a year after the brewery was founded, Glutenberg swept the gluten-free category at the World Beer Cup. This win made the case that now seems obvious: making gluten-free beer taste good depends on craft and not compromise.

The greatest challenge to making a gluten-free beer seems to be finding a way to substitute for the round sweetness of barley. Some brewers try to take a shortcut by using ingredients like pear juice, and the product tastes oppressively of fruit. Others use technology to reduce the gluten in their barley-based beer, but there's some concern that celiacs may still react negatively to this beer. By contrast, Glutenberg is based on an entirely gluten-free grain bill of buckwheat, quinoa, corn, amaranth, black rice and millet.

For me, personally, that sweep in 2012 was good enough reason to try the Glutenberg product with an open mind. I like the pale ales best and find that the hops bitterness balances the slight over-sweetness.

I got in touch with Julien Niquet and David Cayer, the co-founders of Glutenberg, by e-mail and David graciously took the time to answer my questions. I've edited his answers slightly for clarity and spelling. 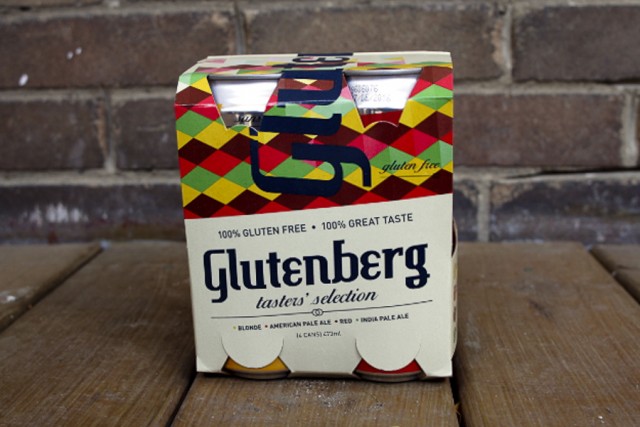 What led you to found a brewery focusing on just gluten-free beers?

Julien and I were classmates and friends long before we started Glutenberg. A born entrepreneur, he was diagnosed with celiac disease and found himself horrified by what the craft beer market had to offer in terms of gluten-free beers. Excited to bring this project to life, we started working on our first beer in 2010. In 2011, after hiring our Head Brewer Gabriel Charbonneau and spending over a year in research and development, we launched our very first beer, the Glutenberg Blonde.

Are your beers entirely gluten-free? Are they safe for people with celiac disease?

Our beers are brewed with 100% gluten-free ingredients, therefore ensuring a totally gluten-free and safe product. We pride ourselves on our methods and do not intend on ever marketing a beer that cannot be presented as tasty as well as completely gluten-free.

Glutenberg won some big awards very early on — was focusing on awards a part of your early strategy?

Our main strategy is and will always be to brew an exceptionally good gluten-free beer but the awards helped shed a light on our accomplishments. It is very rewarding to be recognized by our peers and our awards clearly boosted our motivation to keep pushing our limits. It also quickened our growth outside Quebec since it gave us an amazing international notoriety.

Can you tell readers a bit more about the Serie Gastronomie? Are you surprised that more breweries haven't created beers to go with fine-dining food?

We came up with the Série Gastromie with world-renowned sommelier François Chartier, créateur d'hamornies. His expertise comes from a deep love and understanding of the flavours in molecules and we saw a great opportunity to work with someone as creative as we aim to be.

A lot of breweries actually pair their beers with food but I think that our edge comes from the fact that our work with François wasn't just about pairing meals and drinks. It was about merging unique flavours in new, experimental and unexpected ways in order to bring food and beer pairings to a whole other level. We went the extra mile to establish ourselves not only as a gluten-free brewery but also to highlight the fact that we are just as creative as any other craft brewery out there.

In terms of things like glassware, storage and serving temperature, are there any particular differences for a gluten-free beer? I.E., would you serve a gluten-free American pale ale in the same glass and at the same temperature as an APA made with barley?

It doesn't affect it. Our beers don't require special glasses or serving temperature so we always try to choose the best glass according to the style that we brew.

What are your plans for bringing Glutenberg to Ontario?

We plan to make even more styles available in Ontario. The Glutenberg Blonde can already be purchased at the LCBO and the American Pale Ale will soon make its debut on the Beer Store shelves. Our beer got a wonderful reception and word seems to be spreading so we intend to be even more involved in the Ontario beer community in the following years.