Janine Kennedy, our Canadian expat chef, shares her tips and recipes for classic Irish recipes along with stories of her life in Ireland. Today Janine celebrates her first five years in Ireland and St. Patrick's Day with the Irish Coffee Donuts that she makes at The Siùcra Shack. 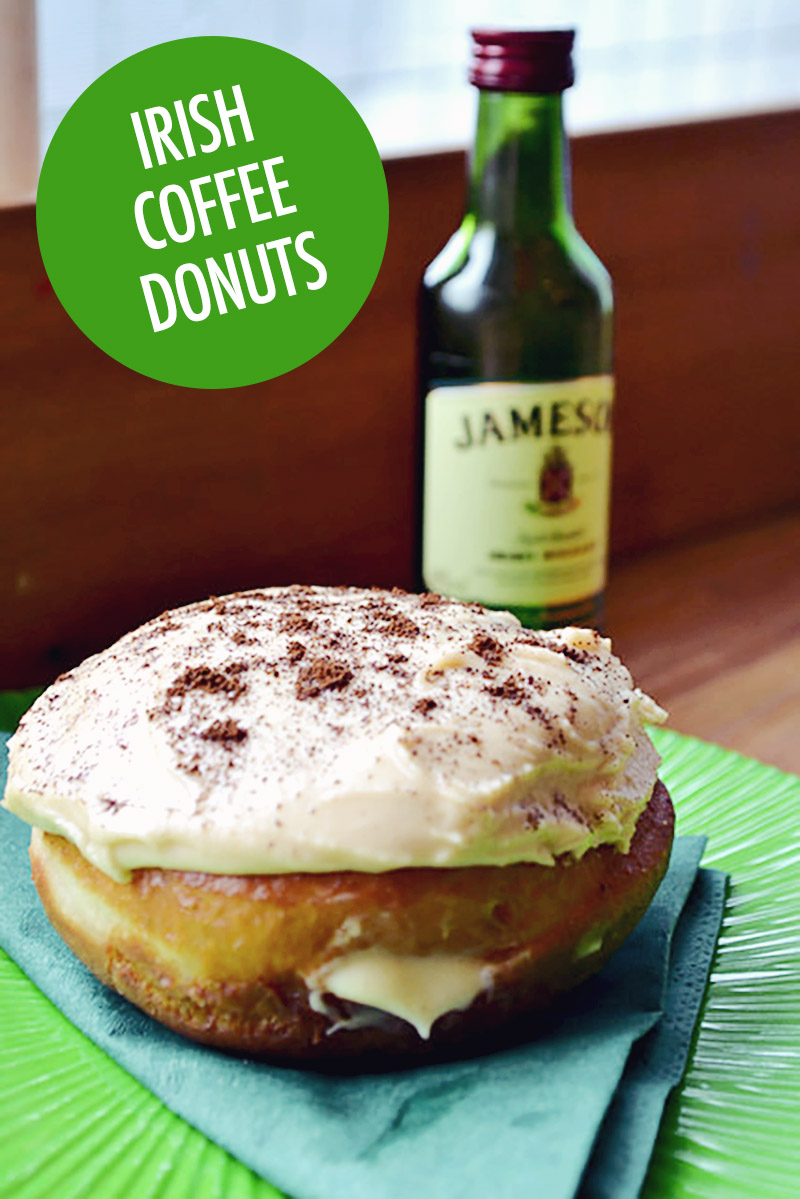 As St. Patrick’s Day 2018 approaches I just need to let this fact sink in: I’ve been living in Ireland for five years.

Five years since leaving my busy and fun career in Toronto to have my first baby in a foreign country.

Five years since feeling the uncertainty of whether or not we were doing the right thing, leaving our Canadian lives for a new life in Ireland (and no job prospects).

Five years since I had a layered poutine from Poutini’s on Queen West. A Butter Chicken Roti from Mother India in Parkdale. Proper Korean food. I could write an entire article on just the food I miss from Canada, and Toronto in particular, but for now I need to focus on how far I’ve come in five years.

In five years I’ve turned a run-down farmhouse (still run-down, but I digress) into a home.

In five years I may have stopped working in professional kitchens, but I’ve developed a meaningful freelance career, started my own food business and, most recently, begun teaching at a nearby culinary school.

These five years have flown. They’ve been full of ups and downs, extreme happiness and anxiety-inducing difficulties. Overall, they’ve been the best five years of my life.

I’m always going to consider Canada home. But, now, Ireland is also my home. It’s where my kids are going to grow up and where we’ll keep on milkin’ our dairy cows and where I’m going to continue to grow my business. And with St. Patrick’s Day looming, and my five-years-in-Ireland anniversary coming up, I think it’s a great time to talk about The Siùcra Shack.

You’ve probably figured this out already: the Irish word for “sugar” is siùcra (pronounced “shu-kra”). As a non-Irish person, I can’t escape my Canadian background. I choose to embrace it through the food I cook. The Siùcra Shack specializes in Canadian-inspired treats made with the best Irish ingredients. And, living in Tipperary and on my own dairy farm, I have access to great ingredients!

Butter tarts are flakier and infinitely more tender using fatty Irish butter. Sausage rolls, an Irish staple, are so much tastier made with a generous glug of maple syrup and some strong Dijon mustard. And donuts? Donuts are light as air, filled with the creamiest custards and the sweetest, most flavoursome jams when everything’s prepared with fresh, local milk, fruit and eggs.

Ireland has made me a better chef.

I feel like moving to Ireland has not only been better for my family, but for my career. Burnout is so rampant among chefs in the city. Our lifestyle choices are often questionable. Living in rural Ireland has not only made me slow down (and realize it’s okay to slow down), it’s made me love food even more than I did previously. Ireland has made me a better chef.

Celebrate with an Irish Coffee Donut 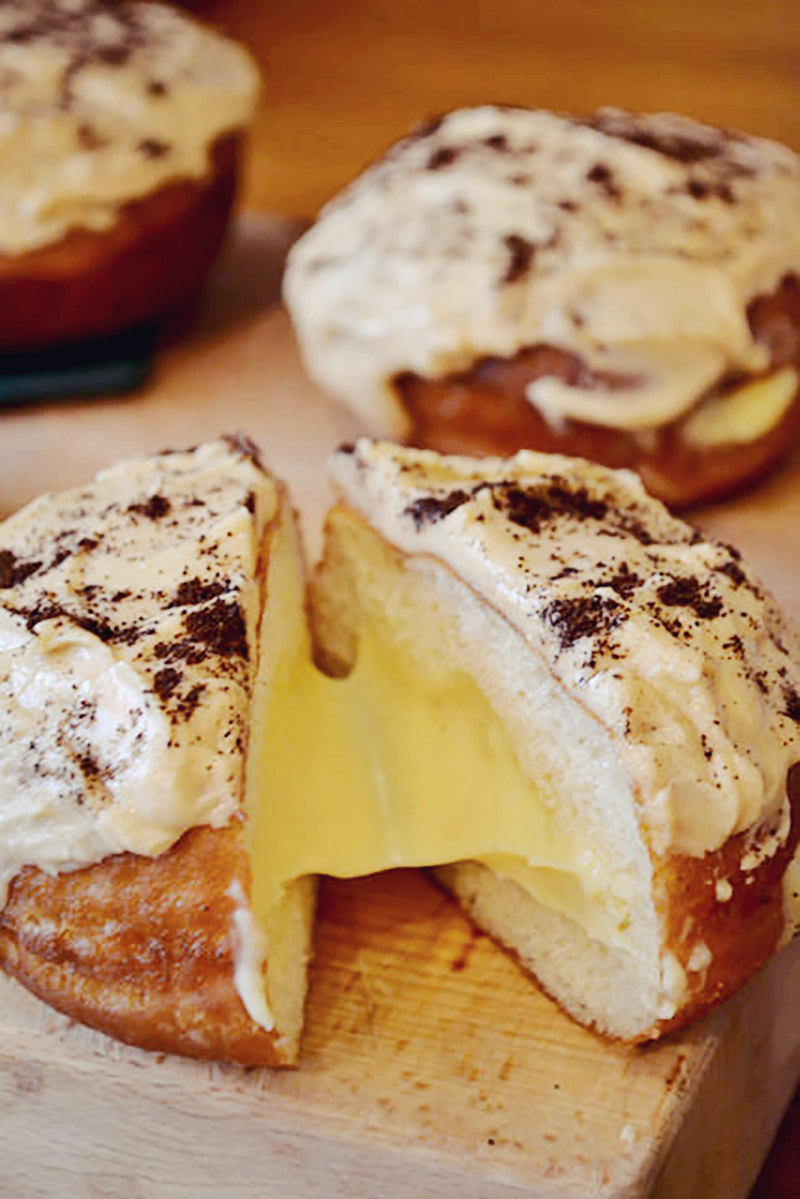 I like keeping my donut flavours seasonal at The Siùcra Shack. In the summer, I make jam from local plums for filling. At Easter, I make a spiced orange dough with currants and glaze the donuts before drizzling vanilla frosting over the top — hot cross bun donuts! In the fall I make apple fritters with apples from a local orchard and dip them in a thick glaze made with the same orchard’s cloudy, deeply flavoured apple juice.

Around this time of year, custard-filled donuts are most popular. Irish folk tend to go crazy for Boston Creams (go figure), but recently, my Irish Coffee Donut has been winning over many a local customer (assuming they’re legally able to eat them!).

Combining a yeast dough with spiced whiskey custard and a deep espresso glaze (and some more finely ground espresso beans, for good measure) I think I’ve been able to capture the experience of drinking a well-made Irish coffee. It’s creamy, with layers of flavour, and completely comforting to eat. A keeper recipe for The Siùcra Shack, definitely.

I used Jameson whiskey this time, but there are great smaller batch whiskeys being made in Ireland that have a fabulous flavour for cooking with. I also used a locally roasted coffee bean for the espresso glaze (Ponaire). You’ll want a very strong espresso or coffee for the glaze.

These are a great treat for your co-workers or grown-up family members this St. Patrick’s Day. If you want to make them kid-friendly you can forgo the booze, but really, what’s an Irish Coffee without the whiskey?

St. Paddy's Day Donuts was written by Janine Kennedy. Janine describes herself as Irish by marriage, Canadian by birth, and Cape Bretoner by divine provenance. She shares her recipes and stories as a Canadian chef living in Ireland on her blog, Cooking with Craic. You can connect with Janine on social media at Facebook, Twitter and Instagram.

Lovely article, and FANTASTIC looking doughnuts! Congrats on literally making the most of your courageous move – can’t wait to check out more of your blog.