The Spice Box – Getting to Know Cumin

Getting to Know Cumin is part of a monthly series here on FBC called The Spice Box.  Primarily written by Michelle Peters Jones, these articles create a spice primer for new and experienced home cooks alike!

Cumin is a familiar spice in several cuisines, including Indian, South East Asian, Thai, Mexican, Middle Eastern, Mediterranean and North African. Cumin is the fruit of a plant from the parsley family. As the plant matures, the fruit dries, leaving behind the distinctive ridged seeds that we know as cumin. The dried fruits are manually harvested and threshed - as they are too delicate for mechanical harvest - and then sold in spice markets either whole or ground. There are two common varieties of cumin, brown and black, and are both used in similar ways.

Cumin is mainly grown in the tropics or sub-tropical areas. India is the major producer (and consumer) of cumin, and there are three varietals of cumin - Indian, Iranian and Mediterranean/ North African. Cumin grows quickly and also requires less water than most crops, so it is a good crop to grow during seasons with low rainfall.

Cumin has a very distinctive flavour, characterized by its warm, earthy, slightly funky and musty notes. It is intensely fragrant, with a slight spicy hotness and a gentle bitterness to it, which mellows during the cooking process. Brown cumin has a stronger flavour than black cumin, which is mellower and sweeter.

Cumin should not be confused with caraway seeds which look similar, but have a much sweeter taste. Whole cumin seeds retain flavour better, and once cumin is ground it deteriorates fairly quickly.

How to Use Cumin:

The best way to buy cumin is to get whole seeds. They last for a long time and as mentioned above, retain their flavour for longer.

To use cumin, it needs to be dry roasted first. This activates the essential oils (mainly cumaldehyde) which gives it its characteristic earthy fragrance, and strengthens the taste.

How To Dry Roast Cumin

To dry roast cumin, heat a heavy based pan until it is quite hot. Throw in the cumin seeds and shake the pan vigorously, until you can see a puff of smoke and the cumin starts to smell intensely fragrant. This only takes between 15 - 30 seconds.

Cumin burns really easily so you need to be quick. If you accidentally burn the cumin (and you can tell by it's acrid smell) throw it away and start again, as burnt cumin is extremely bitter and will wreck your dish.

Once the cumin is toasted, remove immediately to a bowl and let it cool down completely. Don't try and grind hot cumin, as the oils will make it stick to your grinder or blender. Once cool, the cumin can then be ground in a mortar and pestle or a spice grinder.

RELATED:  The Spice Box: Getting To Know Cayenne & Chilies Peppers

Ground cumin can be stored in an air tight container away from light for around three months, but it is always best to grind cumin as and when required, for the best taste. 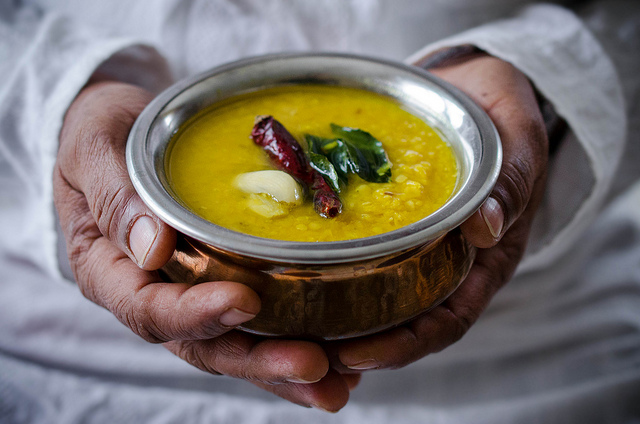 Whole cumin seeds can also be toasted in oil to release their flavour and added whole to dishes. They are part of a common oil seasoning in India, called the tarka or tadka, where whole cumin seeds are toasted in hot oil, along with dry red chillies and bruised garlic, and then added to several dishes, including the popular masala dal.

Whole cumin seeds are also used as a flavouring for breads. Black cumin seeds (not to be confused with nigella seeds, which are a different spice) are mostly used in Indian cuisine, mainly in spice mixes.

Cumin has been used for its medicinal properties since ancient times. It's usually consumed whole after rich meals, as it is considered a digestive aid. In the south of India, cumin is boiled in water or milk to make a drink that is used as a stimulant and as a cure for inflammation and stomach upsets.

Cumin oil is also used in the perfume and cosmetic industry. Black cumin is considered particularly good for the body, and is a component of many natural, herbal and ayurvedic treatments.

Did you know that cumin was originally from the Nile Valley in Egypt? The valuable seeds were used as currency to pay taxes, and so cumin was associated with being greedy and mean. However, during the middle ages, this had changed and cumin started being known as the spice of faithfulness. Nobody quite knows why.

What have you created with Cumin?  Leave a link to a recipe on your blog in the comments so everyone can check them out!

I enjoy the earthy warmth of cumin and use it in a great many dishes. My most cumin-forward recipe is this Cumin Chickpeas dish, and how I came by it is one of my favourite food stories. http://lifethroughthekitchenwindow.com/2014/08/12/on-hospitality-and-a-cumin-chickpea-dish/

I love cumin and use it in many dishes. It is an important addition to my salsa recipe, it just would not be the same without it.

Cumin is one of the healthy spice, we can use it in many cooking recipes.