The Spice Box: Getting to Know Star Anise

Getting to Know Star Anise is part of a monthly series here on FBC called The Spice Box.  Primarily written by Michelle Peters Jones, these articles create a spice primer for new and experienced home cooks alike! 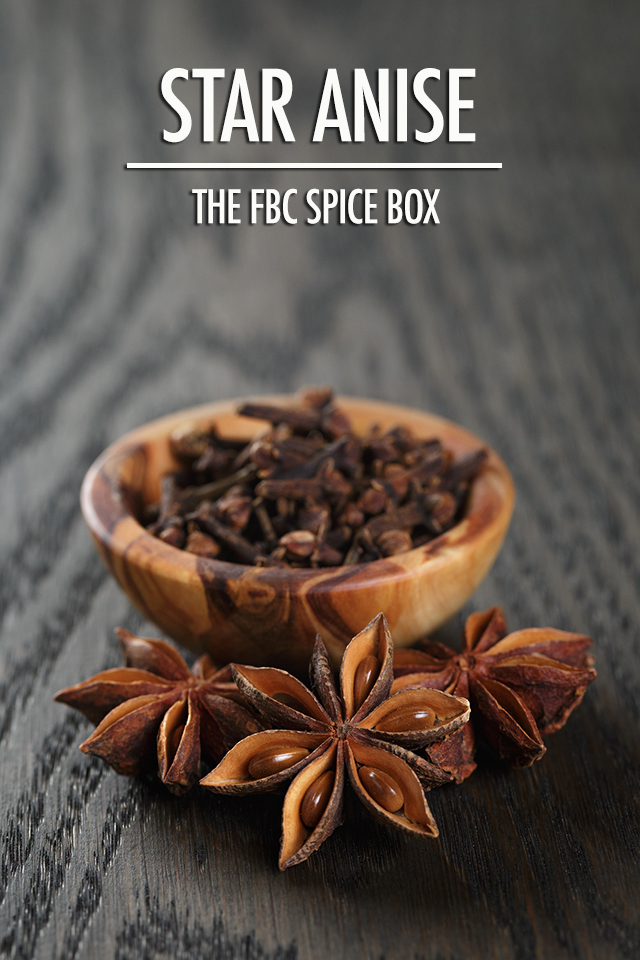 Star anise, also called star aniseed or Chinese/ Indian anise, is an unusual spice, and is easily identified by its unique seven or eight pointed star shaped pod, with small, pear shaped seeds nestling inside. Native to China and Northern Vietnam, it is the fruit of an evergreen tree. The fruits are tough and woody, and are picked just before ripening to maximize the concentration of essential oils. They are then dried to produce the spice we know as star anise.

The Flavour Profile For Star Anise:

Star anise should not be confused with aniseed, anise or fennel (all three of which are members of the parsley family.) However, the flavour profile of star anise is very similar, as anise, fennel and star anise all contain the essential oil anethole, which gives the spices their characteristic fragrance. It tends to be warm and woody, with licorice notes. Star anise also tends to be more bitter, spicier and powerful-tasting than anise or fennel.

Star anise is widely used as a culinary and medicinal spice, particularly in Chinese, Indian, and South East Asian cuisine. It is one of the spices in Chinese five-spice powder, and is widely used in spice mixes like garam masala and masala chai. It is also traditionally used whole, along with other spices, as seasoning in Chinese ‘red’ cooking (a stewing technique where meats, especially pork, are braised for a long time in a soy sauce based broth.)

RELATED:  The Spice Box: Getting to Know Tarragon

Star anise can be used whole or ground, though it is rare to find it in powder form. If using star anise whole, it can usually be added as a flavoring ingredient to soups, stews, sauces, broths, curries or pilafs. If using it ground, it is usually toasted until fragrant, to activate the essential oils. Let it cool before blending into spice mixes. As star anise can be quite powerful, many recipes will tell you only to use one or two petals, or even half of the star shaped pod, in order to keep the taste subtle and not overpower other spices.

Star anise is also often used as a cheaper substitute for anise in mulled wine and licorice flavoured drinks. It is also used as a mouth freshener after eating, similar to fennel seeds.

And finally, did you know that star anise was originally one of the spices used to create the anti-influenza drug, Tamiflu? It created a shortage of the spice for culinary purposes, sending up its prices.