In our continuing Canada's Tastemakers series, we profile people who are making an impact on Canada's food scene,  from authors to producers to chefs and more. Today Tiffany Mayer talks to Martin Albert of True Saffron about producing some of the best saffron in the world in Warkworth, Ontario. 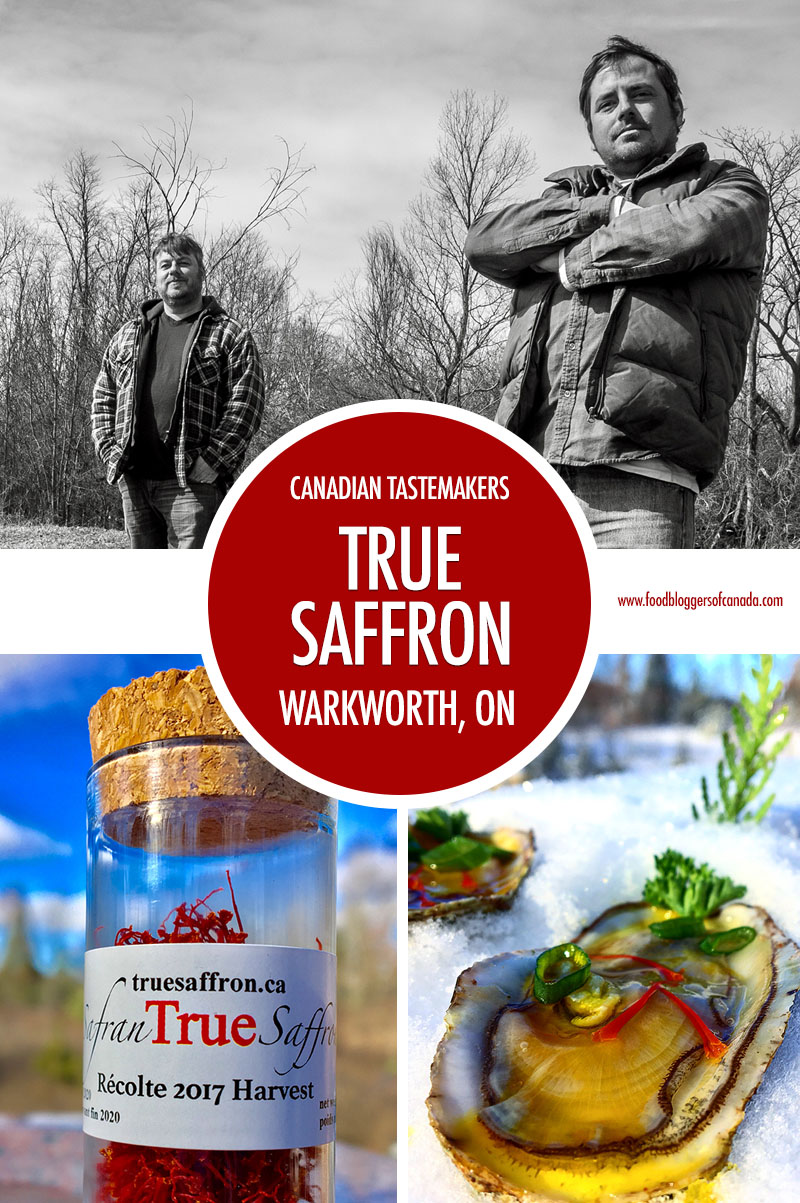 There was a time when Martin Albert worried a lot.

He’d get surges of high blood pressure and tend toward negative thinking.

Then the native New Brunswicker took up farming and that all changed. For the better.

It wasn’t so much the act of farming that kept Martin from the cardiologist, however. It’s what he started growing with business partner Eric Charbonneau that can likely be credited for his uptick in positive feelings and blood pressure readings.

Ask Google, and it will point you to all the scholarly articles needed to corroborate Albert’s anecdotes about saffron’s health benefits, which come compliments of the spice’s abundant antioxidants.

“I used to have rushes of high blood pressure. I don’t have those anymore. It must be doing something based on my own reaction to it,” Albert said. “I’m just a better person overall. I don’t know if it’s related to the plant. I’m just like ‘One day at a time’ and enjoying the journey.’”

The Path To Growing Some Of The World's Best Saffron

That journey started three years ago when Martin seemed at the height of his career as a voice actor. It was February 2016 and production had wrapped on a series in Toronto requiring his dulcet tones when a co-star planted the seed that he and Charbonneau, a fellow voice actor from Northern Ontario, should grow crocuses for saffron.

Albert always had a green thumb, cultivating a colourful garden of perennials at his downtown Toronto home before moving to Warkworth 10 years ago to have more land for growing. So the idea, prompted by a news story about a saffron farmer in Quebec, wasn’t a lark.

The bulbs arrived in August 2016, just as Warkworth and surrounding Northumberland County was enduring its worst drought in 95 years. They disked the land deeply and spent the next three and half weeks planting bulbs 30 centimetres below ground as insurance against the cold that would trade places with the high heat of summer in the months ahead.

That year, about 6,500 delicate mauve flowers sprouted from the earth. They had their first harvest as True Saffron — a milestone they could have been content with on its own. After all, labelling vials of dried crimson stigmas harvested from their Crocus sativus flowers as "local" would have been enough to sell their saffron to locavores hungry for a unique addition to their larders. Instead, the duo had their crop analyzed for quality.

It turned out Albert and Charbonneau produced some of the best saffron in the world.

“The readings came back and we were well over Grade I,” Albert said.

In other words, their Canadian saffron’s flavour and colour — where all the antioxidants with their anti-depressant and nervous system benefits can be found — were off the charts. It was saffron in its truest sense, unlike much of the spice found on store shelves. It turns out, those supermarket varieties are often adulterated or safflower passed off as saffron.

Saffron: The Crop That's Worth It's Weight in Gold

Tampering with saffron has been a problem since the Middle Ages, making it one of the most falsified commodities in the world. Such is the downfall of being one of the most valuable crops on the planet, quite literally worth its weight in gold, and sometimes worth more than the precious metal. It was such a serious offence to tamper with saffron at one time that those caught cutting the spice with cheap fillers could be fined, jailed, or even executed.

Fast forward a few hundred years and things haven’t changed much when it comes to diluting saffron. Last year, a study of the spice sold in India, for example, found that nearly half of it was adulterated and the rest was low grade, despite labels claiming otherwise. And while no one went to the gallows for saffron fraud, the issue makes Albert, Charbonneau and True Saffron’s work and dedication to purity that much more important.

RELATED:  The Spice Box: Getting to Know Lemongrass

The Labour Behind A Saffron Harvest

Still, it’s not an easy job. Saffron is a labour intensive crop. One crocus produces only three of those coveted red stigmas, requiring about 170,000 blooms to produce a kilogram of spice. Each flower has to be picked and processed by hand, their stigmas dried in small batches before curing in darkness for a month.

“That’s where the flavour, perfume and antioxidants are set forever. Everything just gets better,” Albert said.

Admittedly, the unpredictability of what they might find in their fields on any given day during harvest, which happens between mid-October and mid-November, can be a little stressful — no matter how much Albert espouses his crop’s anxiety-reducing qualities. Take the harvest of 2017, for example. The duo woke up to 13,500 blooms one day. The next?

“After going to bed at 1:30 and finishing the last batch to dry, I was thinking the next day there will be fewer flowers. There were 16,000 flowers. They have a mind of their own,” Albert said.

The duo rely on volunteers, paid in quarter-grams of saffron, to help with harvest, which is marketed as the pure spice or used to infuse vinegar, hot sauce, mustard and maple syrup sold under the True Saffron label.

Centre & Main, a local chocolate shop, uses it in bars and bonbons. Albert and Charbonneau also plan to make cheese with their saffron, inspired by a French gouda that they’re certain they could do better.

But even adding a few strands to cookie dough can make an everyday treat exceptional.

“Just simple things like that — you infuse your water-based ingredients with saffron and make your Canadian recipes.”

The fact Albert and Charbonneau produce saffron north of Toronto also dispels the myth that the best versions of the spice comes from faraway places. Iran may be the world’s largest saffron producing nation, but the poor quality soil in which crocuses can thrive can be found just about anywhere, even in arable Warkworth, Ontario.

“The quality of saffron has nothing to do with provenance. Saffron bulbs are genetically identical. They’re all clones, so if people say the best saffron is from Iran, it’s not true,” Albert said.

But no one’s lying if they say consuming saffron makes them happier.

A 2013 review of trials examining saffron’s effects on treating depression published in the Journal of Integrative Medicine found it can improve symptoms when used as a supplement.

It can also turn dinner into quite the social event. By the second course of a saffron-themed supper around a communal table at Warkworth’s Sper Food & Farm restaurant, strangers quickly became friends. Albert wagers it was the saffron, not the close quarters, bringing people together and making the mood — his included — more joyous.

“You’d swear it was a packed bar. It got that loud and euphoric, and these are people who don’t know each other,” he said. “I do love eating saffron. Unless it’s psychosomatic, I have no idea, but I do feel better consuming it.”