In our continuing Canadian Tastemakers series we profile people who are making an impact on Canada's food scene,  from authors to producers to chefs and more.  Tiffany Mayer chats with Squamish Nation Chef Paul Natrall about how he came to be serving award-winning indigenous fusion street food from his food truck, Mr. Bannock.

Who Is Chef Paul Natrall?

It’s Friday morning in early April and chef Paul Natrall has a full day ahead of him.

The owner of Mr. Bannock, a food truck that specializes in indigenous fusion street food, will sling his award-winning Indian tacos and waffle bannock at a Squamish, B.C., brewery before heading to a basketball game in Langley for a repeat performance.

But first there’s coffee: a large triple-triple from Tim Horton’s to fuel Natrall through the work ahead, which he wouldn’t be able to do had he opened a bricks-and-mortar establishment instead of his roving kitchen.

“It’s on wheels so you can drive to customers,” Natrall says. “They don’t have to come to you.”

A food truck has long been the Squamish Nation man’s dream rather than a stepping stone to a fixed address for a restaurant, as some chefs do.

It’s to serve people the food Natrall has known his whole life. Food he loves; food that makes him feel proud. He started two years ago, first by launching his catering company, PR Bannock Factory, and a bannock cart at the Ambleside Farmers Market in West Vancouver. But as the city’s first indigenous food truck, Mr. Bannock is the perfect vehicle to expose even more Canadians to a way of eating many know little about.

“There’s not a lot of places doing indigenous cuisine,” said Natrall, who launched Mr. Bannock in January. “I’d go to pop-up events and no one had any clue.”

Still, there was a hunger to learn and Natrall, 34, was the natural teacher. His bannock bars at catering events drew curious crowds who filled up on fried dough and fresh toppings, and only wanted more. 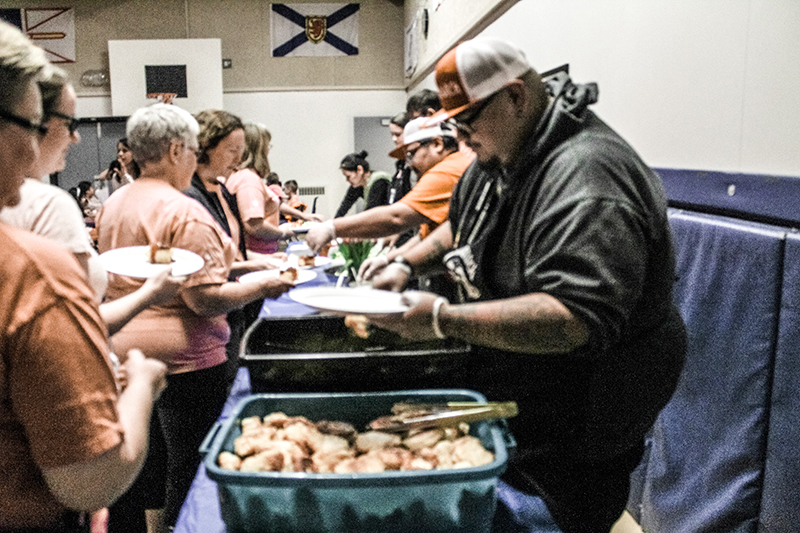 On National Aboriginal Day in 2017, he shelled out 2,100 of his Indian tacos — his spin on a powwow staple of fry bread topped with chilli, sharp cheddar, lime sour cream, salsa verde and spicy chips that was named among the top three at the 2017 Taco Fest in Burnaby.

If anything has been a challenge, it’s been keeping up with demand for his food in a world where other cuisines have dominated. But Natrall is more than keen to try.

“I just want to share my version of indigenous food with people. There’s a huge gap in that. Everyone can go for sushi, same with Italian food. But who’s saying ‘Let’s go grab some indigenous food? Let’s eat natural food from Mother Earth?’”

Natrall’s version of indigenous food was shaped by watching his grandmothers cook for a large family when he was a boy. Their food was “rustic homestyle,” which introduced the budding chef to kitchen basics, including making soups and stews. Such nuanced foods offered lessons in textures and flavours, he explained.

Salmon was also a fixture at the table, he recalled. And though it’s not a food he’d qualify as one of his favourites, Natrall honours the traditions related to it with a barbecue wild Pacific salmon burger on the Mr. Bannock menu.

“My people smoked salmon. They preserved stuff. They cured salmon and then when the colonizers came, they canned salmon.”

His bannock served with whipped honey butter is a nod to another staple of Natrall’s youth: his grandmother’s fry bread with homemade blackberry jam.

Elk and venison hunted by an uncle also figured into many meals growing up.

“We’d have chow mein with elk meat in there. We’d have elk steaks or deer steaks, deer stew. We’d have deer goulash with potatoes. It’s home cooking. One of my favourites was this deer pepperoni they used to get from the butcher.”

In a sense, this “city boy who knows nothing about tracking deer but can cook it” has grown up on indigenous fusion cuisine. Still, his desire to cook it for a living wasn’t accepted by everyone in his family.

Cousins teased him that it was a woman’s job. Validation came when Natrall learned that his great-grandfather, an army sniper, was also a cook in the forces. He went on to operate restaurants in Seattle.

“(My grandfather) was telling me he would be proud of me,” Natrall said. “I’m a second-generation cook.”

Natrall’s first taste of exposing others to his food came in 2010 when he attended a specialty aboriginal culinary program at Vancouver Community College. During the last two months of the year-long program that focused on classic French technique, Natrall got to play with indigenous ingredients and learned the inner workings of smokehouses and farms.

Two years later, he was showing what he could do with that knowledge and his polished skills as a member of Aboriginal Culinary Team Canada at the Culinary Olympics in Erfurt, Germany.

He clocked long hours prepping and cooking barbecued and wind-dried salmon for an audience perhaps even more unfamiliar with indigenous flavours than anyone back home.

“It was intimidating. That was the most nervous I felt in my life. No one knew what it was or had seen it on an international scale in 20 years because the last team that went was in 1994.”

Back home, he cut his teeth professionally in other people’s kitchens. As a single father of five at the time, Natrall wasn’t ready to hang his apron on a sole proprietorship based on indigenous street food.

He knew, however, a four-wheeled business plan had legs after he tested the proverbial waters in 2011 with his bannock and witnessed “fry bread power.”

“When I first started doing anything with fry bread, I had one big bag of flour, some baking powder, salt and four litres of oil. Money’s tight when you have five kids. Back then, $50 was a big deal and I was able to make it back and then some. It just shows that if you work hard enough, and you’re determined, anything is possible.”

A $7,000-grant from the Squamish Nation Trust helped Natrall launch PR Bannock Factory in 2016. Today, the offshoot Mr. Bannock operates most days in the Squamish Nation territory in North Vancouver. Natrall hopes to eventually bring his tacos and his flagship indigenous spin on chicken and waffles — juniper berry dry-rubbed chicken topped with hot sauce and sandwiched between bannock waffles — to the city’s downtown.

He also looks forward to showing off “more traditional foods made with modern tools,” like stone-baked bread done with a pizza stone, and new fusion recipes that go beyond bannock. He’s currently testing less carb-filled pleasures, including a wild berry steak bite on top of a squash noodle salad.

“Everyone knows the Indian taco,” Natrall said. “I’m hoping to add to that repertoire and showcase more indigenous foods.”