You may know which classic Canadian dishes you like, but do you know the stories behind them? And how can we define Canadian cuisine if we don’t know its past? In Iconic Canadian Food, Gabby Peyton shares the back stories of a smorgasbord of iconic Canadian dishes. This month Gabby explores the history of Canada's most iconic sammie, the Montreal Smoked Meat Sandwich!

Peeking Between the Slices

… the magic is in the mess.

There’s no rhyme or reason behind the engineering of the Montreal Smoked Meat Sandwich. That tall stack of thinly-sliced beef smothered in mustard is no match for gravity and I’ve never met anyone who could eat one without making a mess. But the magic is in the mess.

This iconic sandwich is a Canadian staple, and while it’s often duplicated, Montreal takes the cake (or loaf) when it comes to the smoked meat sandwich. The lunch staple has been satiating hungry Canadians since the turn of the 20th century, with Schwartz’s Deli laying claim to the most famous iteration.

For those who haven’t made the pilgrimage to line up for a sammie on a cold February day, Montreal Smoked Meat is a close sister to the ever-popular New York deli staple, pastrami, and a cousin to corned beef. Thin slices of smoky, salty beef are layered (and layered) between two slices of irrationally slender rye bread and smothered in a spicy mustard. And, there’s always a pickle on the plate - and a Cott's cherry cola to wash it down.

The beef brisket used is enhanced with a myriad of spices (most establishments are tight-lipped about their blends), and smoked using Eastern-European methods. It’s this methodology that brings us to the history of the sandwich, and how the Montreal monarch became the iconic Canadian food it is today.

So sidle up to the melamine countertop and dive into the history of the smoked meat sandwich.

When it comes to super-popular dishes, there is usually a handful creation myths (like those of Poutine and the California Roll), and the Montreal Smoked Meat Sandwich is no exception. However, the actual recipe for smoked meat was created worlds away … in Turkey! Well, not exactly modern day Turkey but rather the Ottoman Empire.

When the Empire expanded into Romania, they found a cured-meat product known locally as pastrama. This dish was typically thinly sliced, served cold and seasoned with spices such as coriander, pepper and paprika during the curing process. Pastrama was traditionally made with pork, but in Turkey they began experimenting with beef.

When large numbers of Jewish immigrants began arriving in New York and Montreal in the 19th century, they brought their love of pastrama with them. In fact, during that period you could find Romanian delis dotting the neighbourhoods of both cities. Over time, the Romanian pastrama was gradually transformed into pastrami and, in Montreal, into the smoked meat we know today.

While popular memory credits Ben’s or Schwartz’s with the inventor accolade, the genesis actually occurred decades before either deli was open. Aaron Sanfit immigrated from Yassi, Russia in 1894 and was Montreal’s very first kosher butcher who used the Romanian smoking techniques.

The other culprits for bringing this culinary masterpiece to Canada are debated. Some believe it was Ben Kravitz and his wife Fanny who immigrated from Lithuania in 1899. They opened up Ben's De Luxe Delicatessen and Restaurant in 1908, which remained open until 2006 when it closed after a labour dispute.

RELATED:  It's Canadian: The History of The Japadog

Schwartz’s Hebrew Delicatessen opened in 1928 and continues serving up preservative-free brisket braised in herbs and spices. Owner Reuben Schwartz is credited with making the sandwich popular and, perhaps unsurprisingly, he was a Jewish immigrant from Romania. By the time Schwartz hit the sandwich market, almost every deli in town was serving up the stuff, but he was the one who popularized it. 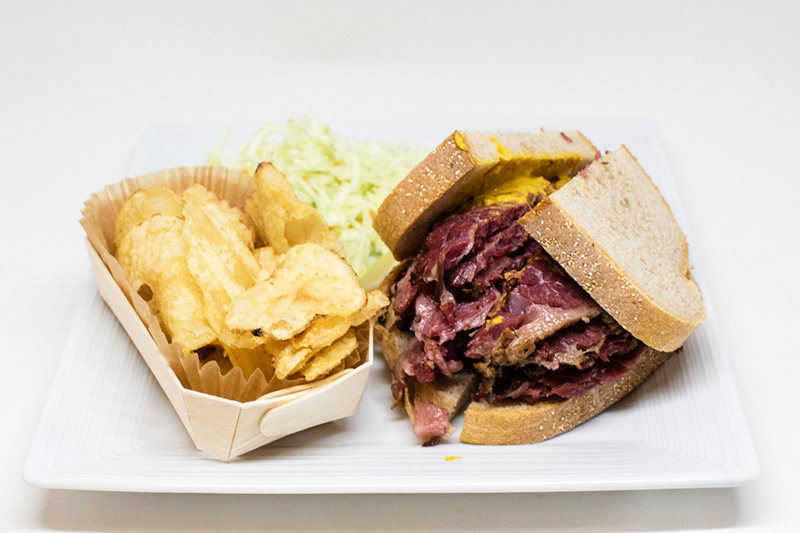 The Jewish deli has become a staple in large cities across the country, but Montreal epitomizes the phenomenon, making it a cornerstone of the dining scene there. Kosher-style dining is a must-eat on a lot of the Montreal dining lists, and many a food pilgrim make the journey to eat at Schwartz’s.

But where to find the best smoked meat in Montreal is a hotly debated topic, with locals adhering to their neighbourhood spot or proclaiming that the oldest must be the best.

Schwartz’s tops many of the “best of" lists, but there are myriad other choices to explore. Lester’s Deli in the Outremont neighbourhood has been pumping pastrami’s sibling since 1951, Main Deli just across the street from Schwartz’s serves up a comparable competitor, and Snowdon Deli has been open since 1946. Reuben’s Deli & Steakhouse is a popular spot with tourists due to its location on Saint Catherine Street’s main drag, while late-night locals flock to 24-hour locations of Dunn’s Famous, which opened in 1927 in Montreal but has franchises across the country.

Where To Find A Smoked Meat Sandwich Across Canada

Even though they may not tout themselves as true Montreal Smoked Meat Sandwiches, there are places all across Canada to enjoy the smoky sammie.

Toronto has a whole bunch of delicatessens that can serve up a mean smoked meat: Pancer’s Original Delicatessen (open since 1957), Katz’s Deli, and Wolfie’s (slicing for more than 45 years) are just a few of the offerings.

Heading westwards, Teddy’s Delicatessen in Edmonton has been pumping out piles of smoked meat since 1932, and Gruman’s Delicatessen in Calgary is another choice. Vancouverites can get their fix at Omnitsky’s Kosher Delicatessen or Kaisereck Deli 0n Granville Island. Back east, Halifax’s Hali Deli is a newer addition to the deli scene, but their smoked meat still has people banging down the door.

The Montreal Smoked Meat Sandwich’s tall stature is as Canadian as it gets. While some restaurant critics talk about the demise of the Jewish deli, the lineups outside Montreal’s delis indicate otherwise. There’s also a new wave of delis ready to serve up the traditional smoked meat that made Montreal famous.

Wherever you devour your smoked meat, remember to thank the Montreal originals and praise their piles of smoky goodness.

Fyi. It’s Cott’s black cherry, not cherry cola. I’d also want to differentiate the cut of meat typically used as smoked meat is a brisket cut, whereas pastrami is traditionally made from beef plate. Being a montrealer, I’m more inclined to the brisket.