In our continuing Canada's Tastemakers series, we profile people who are making an impact on Canada's food scene,  from authors to producers to chefs and more. Today Tiffany Mayer shares the story of Nelson Penner of Wild Feast Nova Scotia in Wolfville, Nova Scotia, whose passion is foraging for wild foods and showcasing them in his cooking. 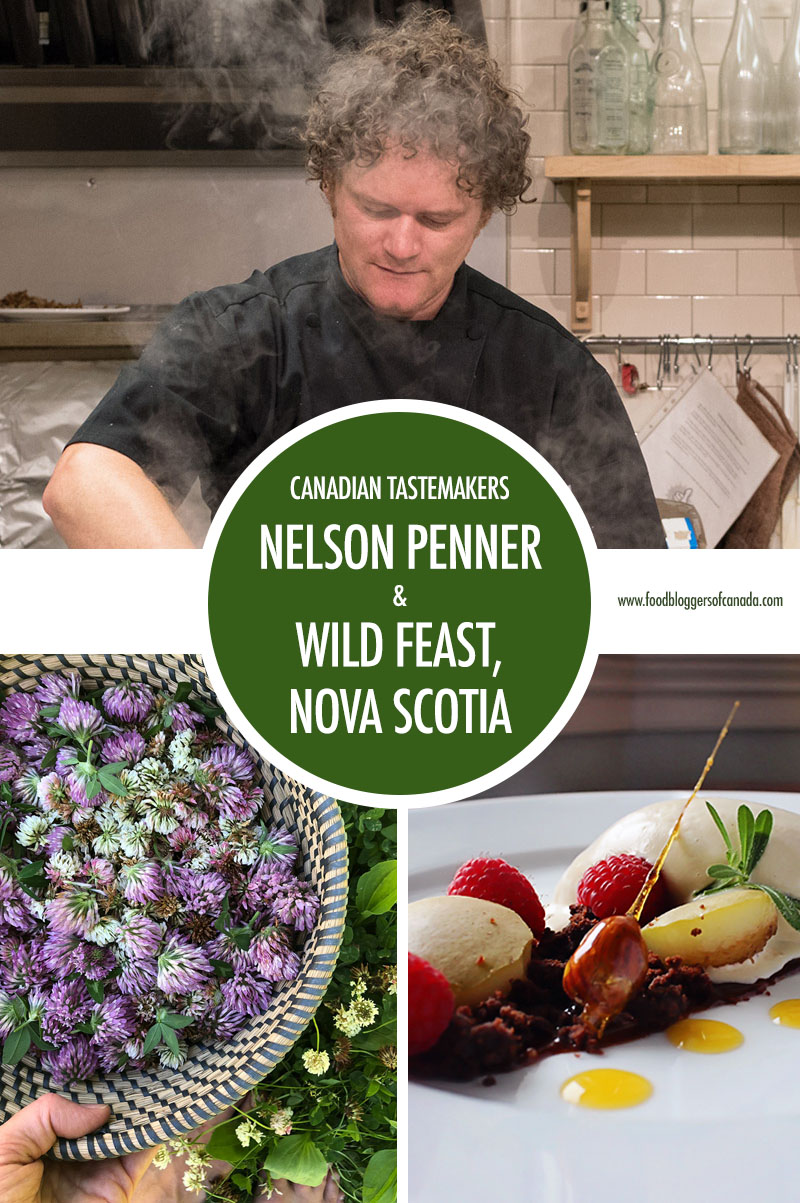 Nelson Penner knew he was on to something when he found his first chanterelle mushrooms 13 years ago.

The aspiring chef was out blackberry picking along an old rail line when he saw the yellow-orange fungi that look like umbrellas turned inside out. Penner, who was in culinary school and cutting his teeth in the kitchen at the historic Blomidon Inn in Wolfville, thought they looked familiar. So he took some to work where his co-workers confirmed their identity and put them on the day’s menu.

“Something clicked. That summer, I started roaming around Nova Scotia looking for chanterelles,” Penner recalled.

He hasn’t stopped since. Penner’s first taste of foraging has mushroomed into a career as a chef whose specialty is wild foods. Perhaps it’s no surprise that fungi are his favourite edibles to find in nature.

“One of the big reasons I love hunting for wild mushrooms so much is their elusiveness,” he explained. “It’s the challenge of finding them. I harvest a lot of wild foods and the ones that are easy to find, I don’t love as much.”

Still, he has a strong affinity for them. So much so that when he rose through the ranks at the Blomidon Inn to helm the kitchen there, Penner put wild food on the menu as much as the owners allowed. Then one day they didn’t.

As an established restaurant with an older clientele, no one was keen on menu changes, especially the diners — “people who wanted the menu to stay the same for the next 30 years.”

But not before meeting Avery Peters, an Ontario transplant with a love for the outdoors. Peters, a writer, profiled Penner and a foraging dinner he hosted at the inn. The meal didn’t just feature the odd wild ingredient. Each dish included several foraged foods.

The two struck up a friendship and when Penner finally hung up his apron at the Blomidon, she suggested they collaborate on a series of pop-up and private dinners.

“Our skills really complemented each other,” Peters said. “I’m good at organizing. He’s good at cooking.”

Peters also had an interest in wild foods. While it was chanterelles that got Penner hooked, spruce tips were Peters’ gateway into foraging, something she continues to gather every spring with her two young children, Llewyn and Junia.

Penner and Peters called their new endeavour Wild Feast after his side hustle, which includes a stall at the Wolfville Farmers Market where he sells fresh chanterelles, fiddleheads and jams, depending on the season. Penner also sells his finds to local restaurants.

Their first pop-up dinner, with mostly friends as guests, was held last December. The soft launch was a success, and since then Penner and Peters have hosted a dinner or two a month at the farmers market and more recently at Planters Ridge Winery in nearby Port Williams.

Most are multi-course meals that feature six to eight courses for a maximum of 20 people, allowing Penner to showcase what’s in season.

There’s an educational component, too. Most people are surprised by how much food grows in their midst, he said, including what many deem pesky weeds, like lamb’s quarters — Penner isn’t fond of those — purslane, and chickweed with its “obnoxious, hay-like flavour.”

Ironically, though, it's porcini mushrooms that Penner really loves. He can’t quite articulate why the champagne cork-shaped ’shrooms inspire him so much in the kitchen. Sometimes they’re earthy and rich. Others, they're more muted, depending where they grow and the temperature in which those spores multiply.

Regardless, he tries to put mushrooms in everything, seeking out those mysterious morsels in all corners of the province.

Penner, who has three weather apps on his phone, travels from Cape Breton to the New Brunswick border, chasing rain and the morels, porcini, bolete and chanterelles that follow.

“I do curse the weatherman a lot,” he said with a laugh. “I keep track of what spots are getting how much rain and mushrooms utterly depend on rain. Whether or not it's wet is essentially all I need to know. If a place is getting rain, mushrooms will grow.”

Penner is driven by more than just a hunger to put rare and unusual ingredients on a plate, however. It’s personal, really.

“There’s something primal about wild food. I’m definitely an introvert …. The opportunity to run around in the wild and not have to deal with people, that factors in.”

Penner also grew up on an organic vegetable farm in Berwick, a 25-minute drive from Wolfville. As a kid, he watched his parents build up the soil. They grew vegetables, had fruit trees and just about every kind of nut tree you can name.

“I’ve always grown and harvested food. Wild food is connected to that. It was, ‘I don’t even have to grow food. Nature is doing it for me.’"

These days, in between hosting Wild Feast dinners with Peters, Penner tries to squeeze in work on the farm. The soil is plenty fertile now, but his dad packed in farming after Penner’s mother died, and decided to open a health food store instead.

“So the farm has just kind of been neglected. It’s one of those things, I don’t want to walk away from it even though I probably could. My dad’s farm, he would be thrilled if I took it over.”

Penner loves the creativity of cheffing too much to trade the kitchen for the back forty permanently. Still, he does envision fixing up the farm — a 5 to 10 year project, he figured — and hosting Wild Feast dinners there one day.

For now, though, he’d like to do more pop-up dinners wherever he can find the space and the time in between chasing mushrooms and his 15-month-old son, Allister.

“I’m perfectly fine with with being a pop-up chef,” Penner said. “I do know if I had a team of people, if I had Avery with me and the right people with me, it would be a totally different ballgame.”