Where To Eat This Weekend in Warkworth, Ontario

We’re back with a new edition of Restaurant Roundup! The theme? Where To Eat This Weekend. We profile different parts of Canada with a list of great dining recommendations for you to check out — from fancy to hole in the wall and everything in between! In this edition Tiffany Mayer takes us on a culinary tour of Warkworth, Ontario. Not far outside of Toronto, just off the 401, this small town is making a name for itself with it's thriving local food scene. 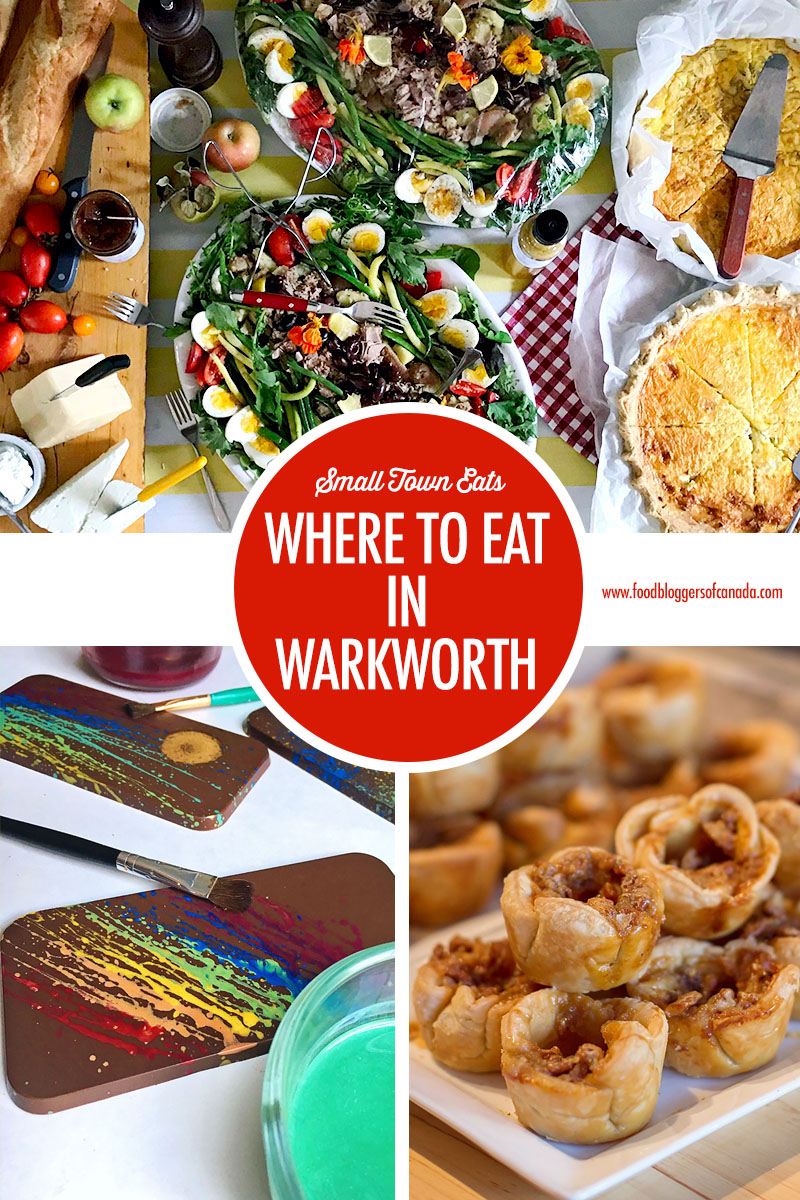 There was a time when you could have told someone you were planning to drive four hours just to eat Iranian kookoo sibzamini from a walk-up window in a residential neighbourhood of a big city and their brow may have furrowed quizzically.

But planning a getaway — day trip, weekender, weeks at a time — around food is becoming as common as packing the sunscreen. A 2013 U.S. study found that more than half of all leisure travellers seek interesting and memorable food experiences when they get away from home, up from 40 per cent in 2006.

In 2019, it’s likely even more of us are willing to go great distances for that eat-like-a-local dining experience and Canadian culinary travel is booming. It’s true there’s no shortage of those waiting for us in a big city but a culinary tourist can pack their itinerary just as full in a small town. Take Warkworth, Ont., population 685.

Warkwhere, you ask? Just 20 minutes off Canada’s busiest thoroughfare, Hwy. 401, Warkworth has all the ingredients of a bona fide culinary destination but without the crowds. It’s home to a thriving food community that’s putting the burg on some very appetizing maps.

“It’s a little bit hidden but we’ve got some great stuff to show off,” said Joel MacCharles, author of WellPreserved food blog, and hardcover ode to preserving, Batch: Over 20 Recipes, Tips and Techniques for a Well Preserved Kitchen. “We’ve got some great restaurants, some great food festivals, amazing farmers from shrimp farmers to saffron farmers doing some really wild stuff. Everything you could look for is being grown here. It’s a fascinating town.”

So fascinating that MacCharles and Dana Harrison, his partner and Batch co-author, who hail from Toronto, bought property here and quickly immersed themselves in a rich culinary culture that goes back generations on family farms, and more recently, can be experienced in coffee shops, market gardens, and around the communal table at a farm-to-fork restaurant.

Warkworth’s culinary clout is rooted in the life-long residents with their institutional knowledge of the area, and newcomers, like MacCharles and Harrison, with their inspired fresh eyes, connecting to make a remarkable place to stay for a slow food-inspired meal or two, and then take home some of the most sublime butter tarts found between the Manitoba and Quebec borders.

Here are just a few of the highlights so you know where to eat in Warkworth this weekend!

Peterborough native Angela Roest started thinking about chocolate “to the exclusion of family and friends” after taking a chocolate painting course for a creative reboot while making jewellery she sold at art galleries. It wasn’t long after she traded gem stones for cocoa beans, taking a job in a chocolate shop. Roest has since relocated to Warkworth, where she runs Centre and Main Chocolate, a sweet tooth’s dream and a microcosm of that collaborative spirit that exists in Warkworth’s food scene.

Roest offers bars of milk and dark co-starring with saffron grown nearby by Martin Albert and Eric Charbonneau of True Saffron or borage and beet from Art Farm Produce. Roest even finds a chocolatey muse in locally made kimchi. Set up to be a feast for the senses, Centre and Main plays hosts to the occasional chocolate painting workshop — the kind that inspired Roest to build her livelihood on one of the world’s favourite treats.

The Bakery At Warkworth

Jess Root and Jason Butler were putting in time at a chain restaurant in Mississauga when a bakery came up for sale in Warkworth three years ago. The couple hadn’t intended to move to such a small town. Root, a certified canine hydrotherapist, and Butler were aiming for Bowmanville, just off the 401, but fate had other ideas for them.

Still, they bought The Bakery and all its recipes, including three kinds of maple butter tarts. Since then, they’ve made their shop a stop on the quintessentially Canadian Kawarthas Northumberland Butter Tart Tour. This is where the raisins vs. no raisins crowds come together in peace, and even pecan fans can get a piece of the pie — er, tart.

Root and Butler also make 250 loaves of bread a week, ensuring carb fixes a-plenty for all.

Chef Douglas Hope has cooked on seven continents but it’s in Warkworth where he hangs his shingle for a relaxed fine dining spot on the town’s main street. Sper's meals from slow food-inspired menus that change weekly are served at a communal table, so expect to make friends (and reservations). Fridays in the summer feature tapas; there’s also an a la carte menu on Fridays, an eight-course prix fixe menu on Saturdays and Brunch on Sundays. Hope focuses on all things local, often hosting themed dinners to celebrate growers from nearby, including a saffron dinner in honour of True Saffron.

Warkworth’s Millennium Trail is a serene setting for a stroll and chance to connect with nature. If you really want to get a sense of Warkworth’s terroir, there are plenty of wild edibles to be found along the path at the bottom of the town’s main street. For a primer on wildcrafting, visit greenmoxie.com, a website published by Warkworth resident and environmentalist Nikki Fotheringham.

It's also worth stopping by Our Lucky Stars cafe when you arrive in town for a hit of caffeine as well as in house baked goods and delicious casual fare for breakfast or lunch to fuel you up for your day of culinary adventures. Menu items are made from local ingredients including produce, cheeses, grains and meats. The menu changes regularly depending on what's available locally!

Browse picturesque Main Street and if you're a curious culinary shopper you'll want to visit Metaphorhome for a wide range of home goods and Canadian cookbooks and The Village Pantry for beautiful kitchenware, ice cream, specialty cheeses and other gourmet goodies!

This sweet town in the stunning Annapolis Valley hosts Devour! The Food Film Fest every year. It’s also surrounded by orchards and wineries (Nova Scotia is easily Canada’s sparkling wine capital for the quality of bubbles coming out of the province). There’s a beauty farmers market and restaurants the celebrate the region on their menus. Check our our guide to Nova Scotia wine.

OK, so it’s an entire county but Norfolk, home to Port Dover, Simcoe and Delhi, has been dubbed Ontario’s Garden for good reason. If it can be grown in Canada, it’s growing here. Norfolk, formerly tobacco country, is Canada’s asparagus capital, even producing rare white versions of the spring vegetable. It features breweries and wineries, fruit and vegetable farms with accompanying roadside stands, and it’s where to go for a plate of Lake Erie perch or pickerel.

Situated on the north shore of the St. Lawrence, Baie Saint-Paul is the crowning jewel of Quebec’s bucolic Charlevoix region. It boasts several restaurants and gastro-pubs that cast a light on the produce of the region, and is surrounded by farms and artisanal food producers.

Tofino is little surf village on the west coast of Vancouver Island on the territorial land of the Tla-o-qui-aht First Nations. With an off-season population just shy of 2000, it punches far above it's weight when it comes to an outstanding culinary scene with multiple restaurants having made En Route's annual best Canadian restaurant list.  Nestled within a spectacular rain forest backdrop and surrounded by the Pacific and Clayoquat Sound, this small, eclectic town makes the most of its plentiful local bounty.  See our full guide for Where to Eat in Tofino.

SUBSCRIBE TO GET YOUR FREE SPICE BOX EBOOK
You are subscribing to the FBC Food Lovers Newsletter.
You can unsubscribe any time!
Click Me
182shares