Who doesn’t love a good grilled cheese sandwich? Even a mediocre grilled cheese (you know, the kind made with processed single slices of plasticky cheese and singularly bland but-oh-so-fluffy white bread) is undeniably comforting with a bowl of tinned tomato soup.

But a good grilled cheese, and by that I mean one that’s been made with good cheese, good bread, and good butter (or mayonnaise, if that’s how you roll), well that’s another story entirely.

So let's look at the science behind the perfect grilled cheese and then talk about some delicious Canadian cheeses that can take your next grilled cheese sandwich to a whole new level of ooey gooey flavour!

Throughout your many kitchen adventures and misadventures, you may have noticed that different types of cheese possess different melting qualities.

When cheese melts it goes through two main stages.

This final melting stage is what leads to perfectly gooey cheese with an oozing consistency that's best suited to grilled cheese sandwiches.

Can You Make Grilled Cheese with Younger Cheese?

Younger cheese isn't always the best cheese (but it can be if used sparingly).

Young cheeses with a high moisture content such as fresh mozzarella, burrata, chevre, brie, and camembert move through both stages quickly. This leads to long strings of melted cheese (the result of casein molecules rapidly breaking apart from one another and becoming hopelessly intertwined in the process).

When making grilled cheese sandwiches with younger cheeses, it’s best to go against any instinct you might have to pile on the cheese. Scale back to half the cheese you’d normally use to avoid a fatty, flabby-tasting sandwich.

Use Extra-Aged Cheeses as an Accent Ingredient

Very aged cheeses such as Parmigiano-Reggiano, cheddars that are more than 4 to 5 years old, extra aged gouda, Pecorino Romano, and crumbly blue cheeses require very high heat (around 80° Celsius) in order to move through both stages of the melting process. What tends to happens is the fat in the cheese will melt and pool to the top of the cheese. However, since it’s not hot enough to fully break down the bonds between the casein, an extra-aged cheese will stubbornly keep its form.

If you love the taste of strong aged cheeses try this simple hack:

Some Cheeses Aren’t Made for Melting at All

Any non-melting cheese that has used an acid of some type to form curds (instead of microbial or animal rennet) will also be a poor choice for grilled cheese sandwiches. Cheeses like haloumi, ricotta, paneer, and farmer’s cheese are best suited for grilling or spreading.

Don’t waste precious non-melting cheeses in a grilled cheese sandwich. All you’ll have to show for it is a slice of rubbery cheese between two slices of bread. 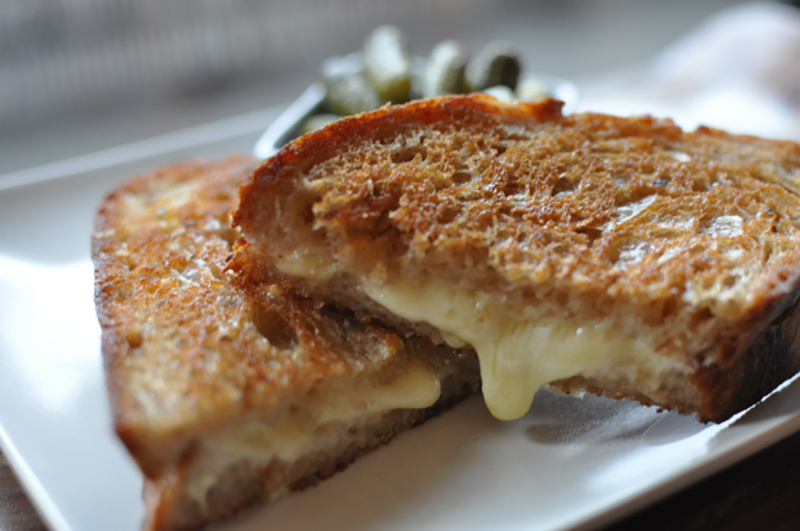 Raclette is made to melt (its name come from the French “racler,” which means “to scrape” — as in, scraping the melted cheese onto potatoes or other accompaniments). Depending on who you’re asking, raclette is either a French or Swiss cheese, but cheesemakers here in Canada have also come to embrace raclette for its funky taste and unrivaled melting properties.

Add plenty of jammy caramelized onions to this grilled cheese and serve with a small dish of mouth-puckering French cornichons.

Alpine-style cheeses are cheeses that have been made from milk produced in mountainous regions. This category includes traditional European cheeses such as Gruyere, Comté, and Beaufort. These cheeses are celebrated for their pronounced terroir, as the cows eat a very select diet of grasses and foliage that are specifically found in their high-altitude environment.

Canadian cheesemakers in mountainous areas are now making their own alpine-style cheeses. They’re absolutely delicious in a grilled cheese sandwich with thin slices of ham and your favourite grainy mustard.

Cheeses made with goat’s milk have been growing in popularity over the last decade and sheep’s milk cheeses are following suit at a slightly slower pace.

Goat’s milk cheeses tend to have a slightly gamey taste which makes them the perfect pairing for stronger flavoured condiments. Sour cherry preserves, tamarind chutney, and even a chunky antipasti dip are ideal when served in or alongside a grilled cheese sandwich.

Sheep’s milk cheeses, particularly with younger cheeses, are more delicately flavoured and can be paired with rose petal or lavender jelly or a small drizzle of wildflower honey.

SUBSCRIBE TO GET YOUR FREE SPICE BOX EBOOK
You are subscribing to the FBC Food Lovers Newsletter.
You can unsubscribe any time!
Click Me
58shares