In our continuing Canada's Tastemakers series, we profile people who are making an impact on Canada's food scene,  from authors to producers to chefs and more. Today Tiffany Mayer shares the story of Suresh Doss, a Toronto area food writer with a passion for shining a light on the hidden culinary gems of Toronto's suburbs and the people who run them. 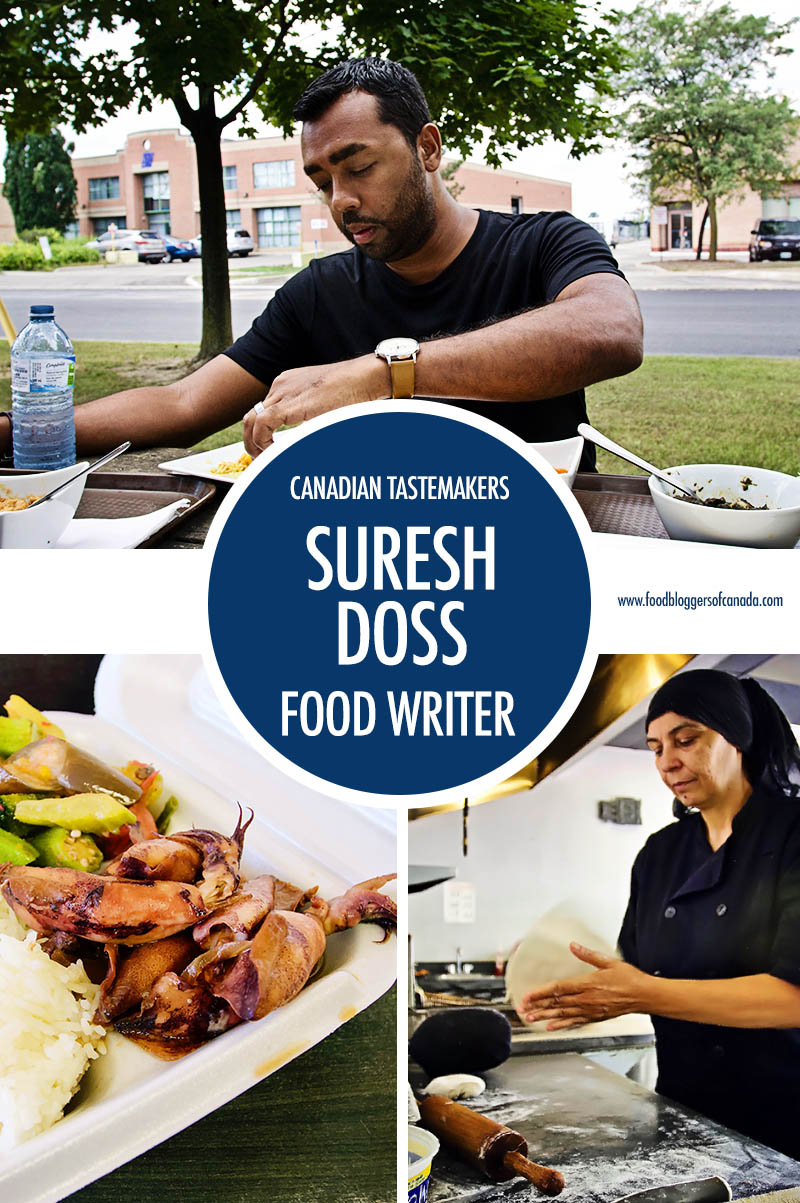 Strip Malls - they’re emblems of suburban living and the generica born of sprawl.

The strip mall also has a way of blending into the background for most people, save for when they need a prescription filled or to buy milk in a pinch.

Suresh Doss has an eagle eye for them, however.

In fact, when he comes upon a strip mall in the suburbs of Toronto, he’s likely to circle the block a few times, intently scanning the lineup of pharmacies, laundromats and convenience stores to see if one of the city’s unsung culinary heroes is hiding among them.

Should Doss find a potential candidate, he’ll stop for a bite, make a few notes, and perhaps change the fortunes of the team of aunties or lone purveyors running these hidden gem restaurants of Greater Toronto.

Who is Suresh Doss?

Suresh Doss is a food writer and video journalist known most recently as the voice of Metro Morning’s weekly Food Guide segment on CBC Radio Toronto. Not one to follow the pack to the bright Edison lights of downtown Toronto's most Instagramable restaurants, Doss carves his own path in the world of culinary storytelling — to the places that may fall short on atmosphere but make up for it with compelling food and even more fascinating people cooking it.

“It’s how I find every place. I just drive. There’s no Yelp for this stuff,” Doss said recently over a takeout container of stuffed squid at a Filipino hot counter behind a Brampton strip mall. “I find these places driving around.”

He also, quite literally, puts them on the map. Take Tandoori Tonite, a spare South Asian eatery nestled between auto parts retailers and a new-age place of worship in Brampton, poster city for the mini-mall. There’s no website or Instagram account to draw people into the year-old business run by Samina Javed, a single mom of three, who came to Canada from Pakistan 20 years ago.

Her specialty is stuffed naan, and she gauges the temperature of her tandoor oven simply by holding her hand above it.

Doss often has to drop pins on Google Maps so he — and anyone else — can find such discoveries again because they’re rarely marked on the navigational tool touted for its omniscience. His legion of followers are grateful for his efforts, especially after he features his finds on his hugely popular radio segment.

In the case of Javed, who opened a restaurant for more security than the spotty hours she was getting in other kitchens, it took Doss four visits before he featured her on air. His first was to try her food; the second to confirm her biryani and naan were worth talking about. (If you’re coming to Brampton, Tandoori Tonite is the place to go, Doss assured.)

The third time, he pitched the idea of a feature to Javed, and the fourth was to film, photograph and interview her for a 1,000-word story, fulfilling the radio, Facebook, and website spots CBC requires of him.

“It’s the hardest thing I’ve done,” Doss admitted about the CBC gig. “It puts a personal touch on it. My name is on it.”

That’s both a blessing and a curse for the restaurant owners whose stories Doss tells. Thanks to a large and loyal social media following, who’ve eaten up his every word since his early days writing his food blog, Spotlight Toronto, the restaurants he features on CBC and in his feeds get huge infusions of new business.

Breaking Down Barriers Through Food

Still, Doss’s raison d’etre isn’t to find the next big thing in dining or hammer out a listicle. It’s telling the stories of the people behind the food.

“Most food writers don’t go two or three levels deep. They won’t talk to the guy cooking the shawarma and that’s where the really interesting story is,” he said.

They’re also stories that foster tolerance and break down barriers, real or imagined, for customers stepping foot in Doss’s finds.

Doss is very much at home at Pampanga Cuisine, the tiny and simple Filipino eatery where we met. But he knows not everyone else would be so at ease stepping up to the counter to order a styrofoam tray of pink squid with okra and rice.

“Most of my peers wouldn’t be comfortable in here,” he said. “There’s no menu, there’s no structure, there’s no signs. They might be shy about mispronouncing something.”

Doss hopes featuring a spot like Pampanga on the radio or on one of his sold-out food tours through Toronto's “culinary suburbia” and cultural neighbourhoods will change that. Feeling comfortable stepping up to the counter for shawarma at one Middle Eastern spot will build confidence ordering stuffed squid another day at the Filipino joint, he explained.

And ultimately, people whose paths might otherwise never cross are coming together over food.

“I’m more about teaching you to explore these neighbourhoods on your own. I’m giving you the essentials,” he said. “We should all be eating different things. It helps us appreciate other ways of life.”

The Road To Food Writing

It’s an appreciation he first honed with his mom, whom he credits with helping him “decode food.” He was also exposed to different flavours and tastes growing up in the cultural mosaic of Scarborough after leaving war-torn Sri Lanka in 1990. It’s the latter, he said, that really gave him the foundation for his food writing.

Putting pen to paper didn’t seem to be his calling at first, however. Back in Sri Lanka, his father had a computer school that kept Doss occupied when the civil war was at its worst and he couldn’t attend school himself.

When the family moved to Canada, his father opened a computer school in Scarborough. Doss moonlighted teaching people to build computers. He was 15. By 18, he became the youngest Microsoft certified systems engineer and certified trainer.

Doss forged out on his own at 21, taking a tech support and troubleshooting job within the Microsoft empire that enabled him to travel.

He ate at places like Thomas Keller’s Per Se on those business trips, and got his “post-secondary education” in food. He knew early on which part of his job he liked best, and it had nothing to with technology.

“I felt like I was at the top of my game but I was bored fixing things. No one’s happy to see you. You’re in a cold room looking at computer after computer.”

So Doss quit Microsoft and used his technological know-how to start a food blog. It was 2003 and his ability to code a slick website set him apart from other bloggers with their early pre-fab templates.

It was the right decision. A few years later, his Microsoft job was rendered obsolete by AI that helped office workers fix their tech glitches without human help.

Still, starting Spotlight Toronto was a bit of a slog. The pay was a fraction of what he made in IT. No wine writer took Doss seriously, either, though he’d eventually go on to win a VQA Promoters Award for his writing about Ontario tipple.

Doss also focused on the downtown Toronto dining scene in those early days. The city’s core was now his home and someone advised him readers would eat up that kind of content.

The tasting menus at the new and notable became predictable, however. Doss also realized not everyone eats multi-course, big ticket meals. The stories in the city’s outlying areas were much more interesting to him, and no one else was telling them.

“I wanted to tell the stories of blue collar workers, and mom and pop and where they go to eat.”

For all his talents and golden touch, though, Doss gets rejected a lot. Six or seven restaurants turn him down for every 10 he approaches about being featured on Metro Morning, he said. When he mentions CBC, many restaurateurs think he’s from a certain national bank and grow skeptical of his intentions.

He’s also a “brown guy coming into these places.” The expectation is that he eats his shawarma and leaves. Even the women at Pampanga didn’t know what to make of him the first time he stepped up to the counter.

“They raised their eyebrows and asked, ‘How did you hear about us?’”

Doss remains undeterred in his quest for the best food stories, though. When CBC approached him about a weekly spot, he was clear there would be no lists or best-of’s. He wanted to take people on a tour of the Greater Toronto Area. The first few segments took off and his time slot on Thursday mornings was formalized.

Doss also serves as print editor for the Toronto franchise of the Foodism glossy. It’s a way for him to maintain the audience he built during his downtown days with Spotlight Toronto.

Like radio, Doss does the magazine on his terms. “Let’s call it Foodisim Toronto, fine, but it has to be Ontario,” he recalled telling publisher Krista Faist during their early discussions about him joining the publication. “At first, it was no, but after six or seven times, it was yes.”

Yes to getting the story behind the food — to digging deeper — whether it’s in Guelph, Niagara-on-the-Lake or at a strip mall in Brampton. It’s something he wishes more food writers and bloggers would do, rather than seeking the path of least resistance to content via popular Instagram posts and PR reps with cut-and-paste message tracks.

“I want people to know you don’t have to do what other people are doing,” Doss said. “They’re just scratching the surface. Immigration, culture, they’re big topics right now and food is a big part of that.”